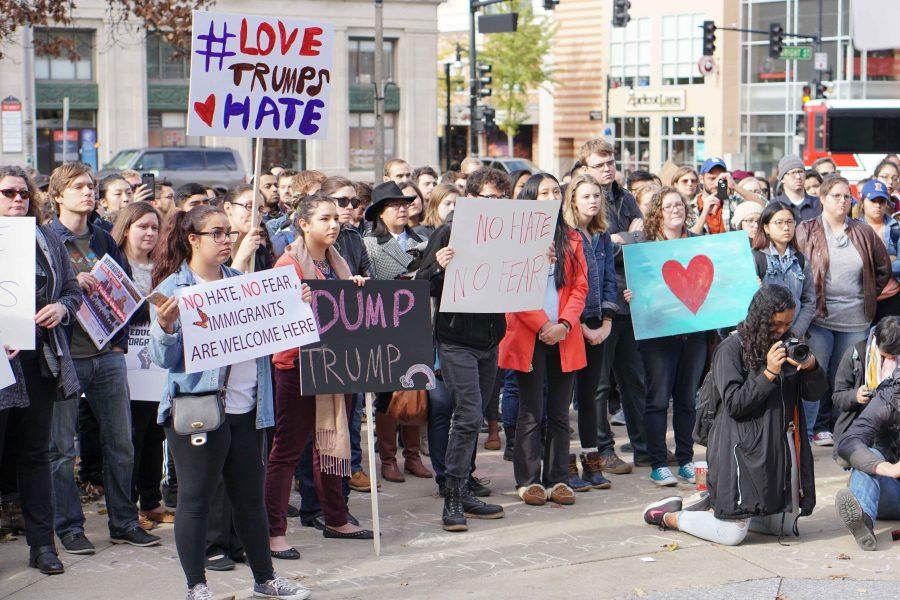 The Not My President Solidarity Rally was hosted by the Mexican Student Association at UIUC. Many students protested the discriminatory attitudes towards undocumented individuals during the presidential election.

President Timothy Killeen vocalized the University of Illinois’ dedication to protecting undocumented students in light of the possible elimination of the federal program Deferred Action for Childhood Arrivals, DACA, in a Massmail sent Tuesday afternoon.

DACA was enacted in 2012 to allow certain people who came to the United States as children to request consideration of deferred action for a period of two years, subject to renewal.

“Since 2012, DACA has supported undocumented students across the U of I System, providing a life-changing pathway to a University of Illinois degree without fear of deportation,” he wrote. “The program also supports the best interests of our state and nation, nurturing the talents of students who are already an integral part of our universities and who wish to become leaders in the workforce and in their communities.”

Killeen also expressed the University’s support for the BRIDGE Act, or Bar Removal of Individuals who Dream and Grow our Economy, a bipartisan proposal co-sponsored by Illinois Sen. Dick Durbin that would extend the provisions of the DACA program for three years.

“We’ve been looking at our undocumented student body, and been working to make sure all the right resources and approaches are in place to keep our students in the classrooms and in the libraries,” he said. “Every student is our student, and we want them to have unfettered access to education.”

The University of Illinois System, which includes all three campuses, pledged to continue admitting students without consideration of their immigration status, Killeen said, and will not inquire or keep records of whether a student is an undocumented immigrant.

Aside from the repealing of DACA, the University is preparing for other changes that might arise under Donald Trump’s presidency.

The issue of healthcare for University faculty was briefly discussed, given the possible repealing of the Affordable Care Act.

Additionally, Senate Executive Committee members told Killeen about their concern that the University may run into further financial difficulty under the new president.

Mark Steinberg, chair of the Academic Freedom and Tenure Committee, asked Killeen if the University had representatives in the circles of the White House, citing his concern that the University’s financial uncertainty is heavily affecting the retention of faculty.

“We are still getting a sense of who is representing the White House,” Killeen said.

George Francis, chair of the Information Technology Committee, held similar sentiments regarding the future of the University.

“We are a very competitive university, very attractive to top talent and we want to preserve that,” Killeen said. “Both for the state where we have important contributions to make and globally as well.”