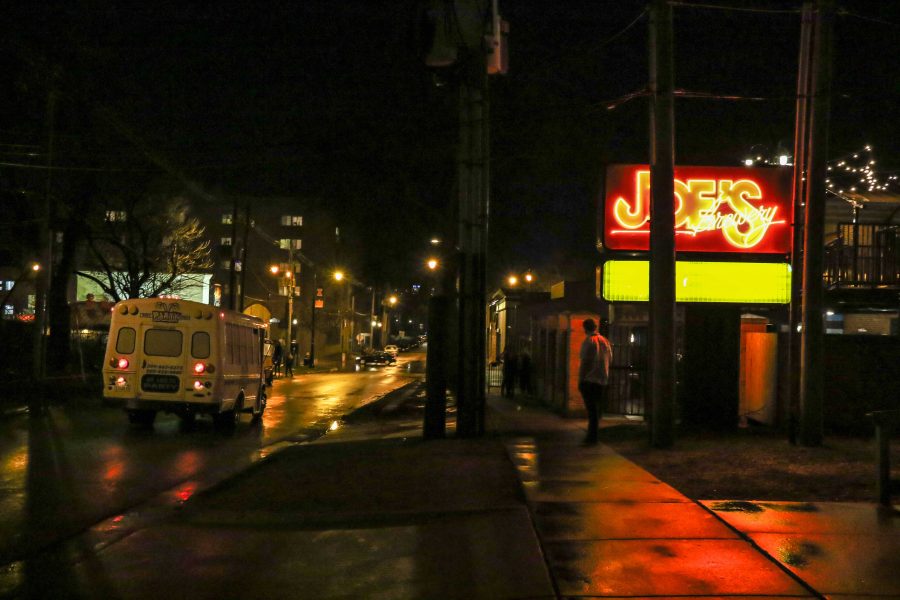 A Bob's Party Express Bus drives away after dropping off students from Illinois State University at Joe's Brewery on Monday night, Feb. 27.

Bar-goers in Champaign are not just University students.

Savanna Manns, sophomore at ISU, traveled on Bob’s Blue Night party bus earlier this semester, and she said that they are very popular in Bloomington-Normal.

“It’s not too costly, it’s super convenient and it beats getting a DUI,” she said in an email.

“I love this business because there are truly markets everywhere,” Crowe said. “People drink, they like to have fun and they can’t do that and drive.”

Jungle Bus runs if a minimum of 25 people pay the $12 fee, a similar rate to other party buses traveling from ISU.

Crowe created Jungle Bus in 2015 and drives it from Bloomington to Champaign nearly every other day.

Because Champaign has a younger bar entry age, Crowe decided to take advantage of that market.

“Whoever developed Champaign really benefits me because I make a good living taking kids there, and I do it very responsibly,” she said.

“It is quite a challenging business; you’re dealing with intoxicated young people,” she said.

Manns believes she’s not one to judge underage drinking that may occur on party buses.

“We all have our opinions, and as always, we all live our lives differently,” she said. “For the most part it’s under control, but there’s always one person who’s had too much.”

There is frequent damage done to her bus, Crowe said, including to the jungle-themed decorations, windows, doors and surveillance cameras.

“I swear much of (the) abuse is coming from initiation to frats because they do so much damage,” she said. “They’re very brute. I think I’m finally making headway with it. Frats are a major challenge because they’re still young, not well-behaved and they’re in a group.”

Along with having strict safety rules, Crowe said her two poodles come along for the ride and help the atmosphere on the bus.

“I call them my little peacekeepers because they really change a person’s mood and attitude,” she said.

Crowe said she accepts liability with her party bus, and she has the safety of her passengers in her hands.

“You really have to be able to not escalate things. Fighting on the bus is extremely dangerous,” she said. “You have to have the right temperament to deal with and tolerate (drunk young people) and not be abusive to the kids because they will push your buttons.”

Both Crowe and Lee Eutsey, owner of Magic Bus, believe Saturday is their most busy day.

Magic Bus began in 2007 and calls itself “The First Mega Party Bus in Blo-No.”

Eutsey said he usually only gets one busload a week, which is 40 to 50 students.

Crowe expects Unofficial to be popular for her party bus, but Eutsey is unsure.

“I haven’t had any calls yet for Unofficial,” he said.

Crowe believes that party buses like hers could do well in Champaign given the culture on campus.

A previous version of this article misspelled both Julie Crowe and Lee Eutsey. The Daily Illini regrets this error.