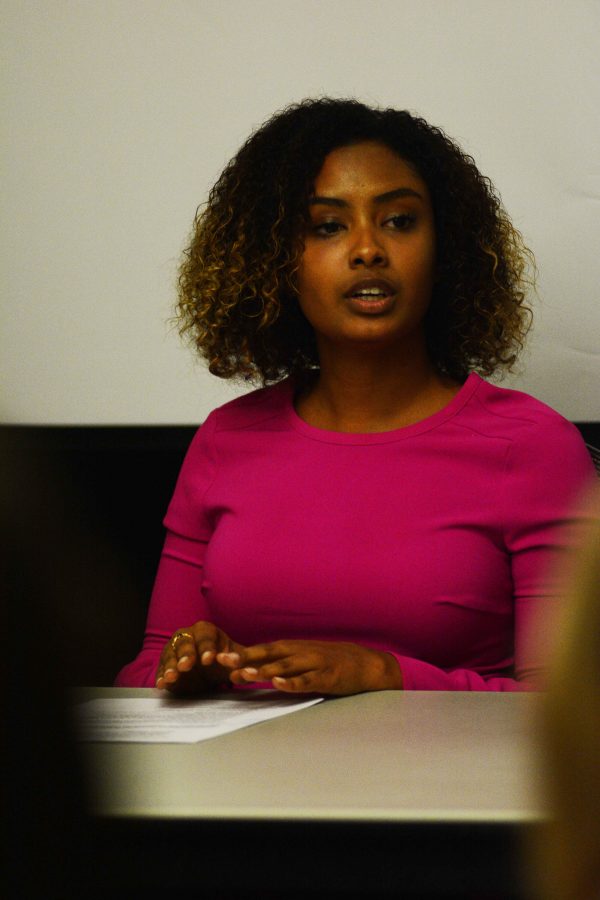 Raneem Shameldin, pictured at a debate on March 6, is predicted to win the election for student body president.

Unofficial election results predict Raneem Shamseldin, junior in Business, will be the next student body president.

“Raneem is definitely qualified; she has the best interests of the students,” said Ron Lewis, current student body president. “You have people who do it for the name or title, but I’m 100 percent sure Raneem did this for the students and she wants to make it a better place.”

This is the first year since 2004 that the student body president was elected by the students. Previously, only student senators were allowed to elect the president. The change comes from the implementation of the new constitution within the Illinois Student Government.

Voter turnout increased significantly this year. Knier said that voter turnout is usually 3,000 to 4,000 people. This election, however, had almost 6,400 in total. Although the increased turnout may be because of the student body president being elected at large, it could also be due to the divisive referendum questions.

“There was a huge focus on connecting the community more,” Lewis said. “Having (almost) 5,000 people vote (for student body president) adds legitimacy and builds the connection we hope to have.”

Even though Knier lost the election, he was also pleased with the turnout.

“I cannot complain about getting 2,000 people engaged in what I believe in,” Knier said. “I’m doing my thing and people are responding to that.”

Students who experienced trouble were notified in an email that after voting they could resubmit their ballots.

The unofficial results of the referendums are also available. A majority of students voted in favor of student fees that allow for students to ride MTD buses.

The other referendums that passed include continued funding for the Krannert Center for the Performing Arts and the Collegiate Readership student fee, which provides free electronic and paper copies of at least three of the following newspapers: The New York Times, USA Today, Wall Street Journal and Chicago Tribune.

The only referendum question that failed to pass was whether the University should divest from companies “that actively normalize, engage in or fund recognized human rights violations of marginalized groups worldwide.”

“It was cool having two campus-wide office elections and I think they all did their part,” said Alex Villanueva, current student body vice president of Illinois Student Government. “But, of course, the big turnout was the divestment referendum question. Pro-Palestine and Pro-Israel sides got people out to vote.”

The question of whether the University should divest from certain companies became an Israel versus Palestine issue on campus. Opposing groups advocated before the election in the hope to persuade students.

The full list of elected student senators can be found on the Campus Student Election Commission website.

The results from the trustee election have not been released yet.