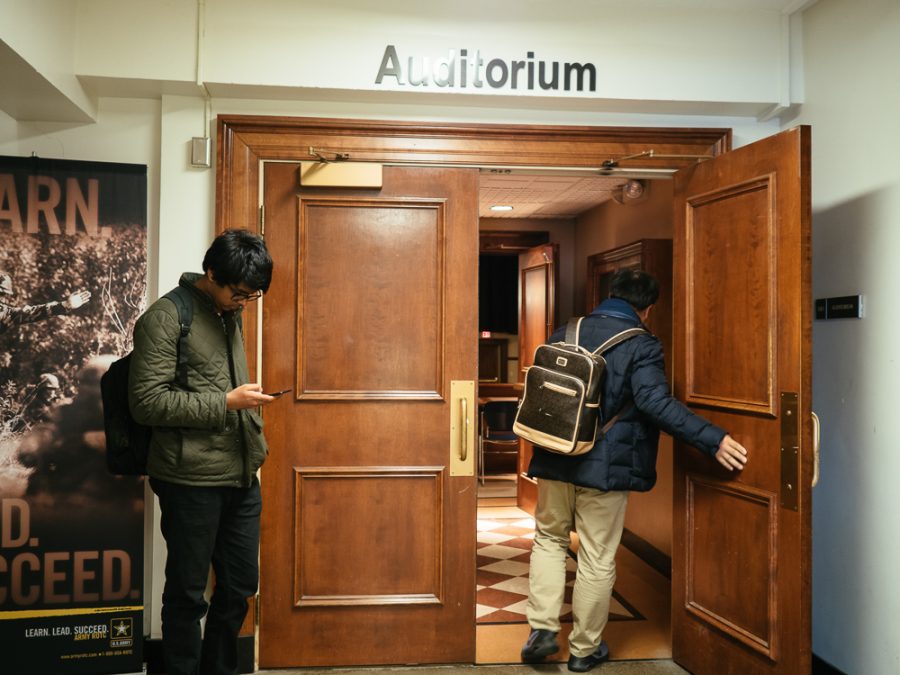 Students walk into the auditorium of the Armory on March 15, 2017.

“Fake news” has become a common phrase, especially when referring to outlets like CNN and The New York Times.

Scott Althaus, political science professor and director for the Cline Center for Democracy, believes that the term “fake news” is confusing for the public since “fake news” refers to both made-up facts and facts that Trump finds are not in alignment with his policy.

While Trump calls some facts false, Althaus said they are still valid facts that even the White House can’t deny.

Benjamin Holden, associate professor in Media, said when Trump calls the press fake, it undermines the free press as an institution.

“It lowers the bar and desensitizes students to how absolutely reprehensible fake news is,” Holden said.

While Holden isn’t sure how his journalism students feel about Trump’s tweets about the press, he believes that if he were a student today, he might consider changing his major.

“If I was a student, and I had expert teachers, I’d go and ask them about what Trump is talking about,” Holden said. “If I didn’t have mentors at high levels in the news business, I might be really confused and quite frankly I wouldn’t want to be a journalist.”

Even though Weiss changed his major from journalism to political science, Trump’s rhetoric is making him consider switching his major back to journalism.

Althaus noted that a president critiquing the press is not new, but Trump’s attack on the news media is different.

“What is new with President Trump is really calling into question the fundamental motivation, not of just of individual journalists, but of entire news organizations,” he said.

Holden noted that the press is respected in the First Amendment of the Constitution, as well as by judges and past presidents.

Weiss agrees with Holden in that Trump is discrediting the media, even though most journalists are just doing their job.

“(Trump) isn’t acknowledging with what the media stands for,” Weiss said. “I think that’s what journalists actually do, hold people accountable.”

Holden believes that Trump is making journalism seem like a “sleazy profession.”

Holden recalls that journalists who published “fake news” were regarded poorly and he sees negative consequences that could follow Trump’s “fake news” rhetoric.

“We have a president, whether you agree with his policies or not, that seems to be hellbent on doing damage to the constitution,” Holden said.