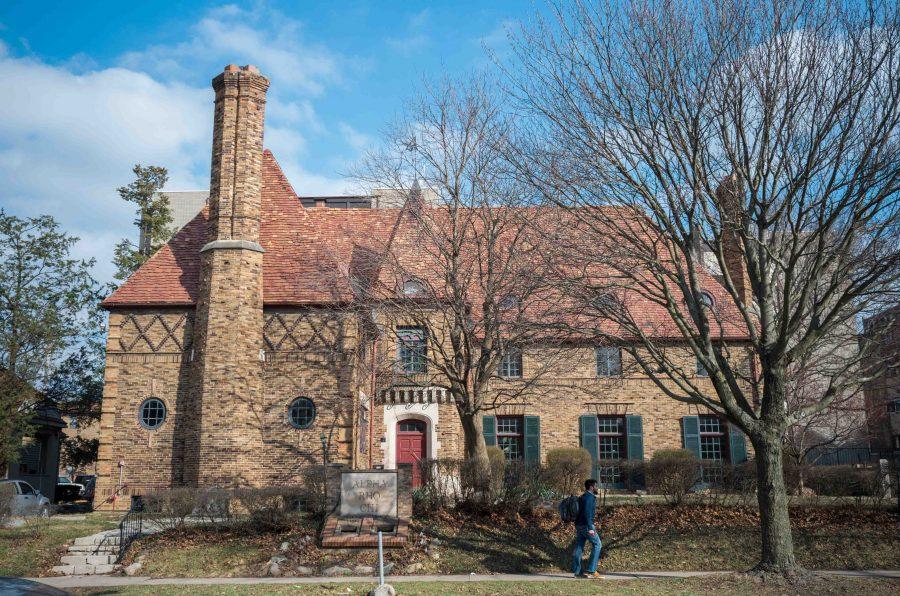 Phi Mu will lease Alpha Rho Chi’s chapter house starting on June 1st and members will move in in August.

Starting June 1, the Alpha Rho Chi chapter house will be hosting a different Greek house for the first time in 90 years due to their low occupancy rate. The chapter house is rented to Phi Mu, a sorority who joined campus in fall 2016, as a temporary house for the next three years.

“We acquired this house in 1927. We’ve been the only fraternity to occupy the house,” said Claudia Miraldi, sophomore in FAA and the worthy superintendent of Alpha Rho Chi. “We generally keep it open to only architectural students, which has worked out so far. Unfortunately, our member number is too low.”

Alpha Rho Chi wanted to rent the house to a fraternity last year, but decided on going with a sorority instead because they think sororities will go easier on the house, Miraldi said.

Alpha Rho Chi, a professional architecture fraternity, has 20 active members, but only seven people are living in the chapter house. Despite including two non-members, they are still five short of meeting the minimum number of residents to break even on the expenses.

This is partly due to the University’s policies on where freshmen can live.

“(The University) has gotten really strict with just even moving in second semester freshman year, which has always boosted our numbers,” Miraldi said. “So that kind of stuff didn’t really work out in our favor.”

The high maintainence fee also contributed to the decision of Alpha Rho Chi renting out their chapter house.

Miraldi said that they can consult with other chapters about surviving without a house.

“We can become more like a club and less like a frat, in the sense where we just don’t have one place where we all gather and just hang out,” Miraldi said.

Alpha Rho Chi is pulling away from the house to experiment and see what they need to fix for next year in terms of recruitment, professional events and even pledge nights.

The lease starts on June 1, but Claire Fischer, junior in LAS and the president of Phi Mu, said that the 27 members of Phi Mu will move in August 2017.

Alyssa Coleman, sophomore in LAS and the housing committee chairman of Phi Mu, said that the nationals started the search a year before the sorority got to campus.

Coleman also said that the sorority members have minimal say in the process.

“They (nationals) are super picky,” Fischer said. “They just want to make sure they find the best location and the best house possible. At this point we don’t know where the permanent house is going to be, but obviously we’re gonna have to find a permanent house eventually.”

As a new sorority on campus, members of Phi Mu are looking forward to moving into their temporary chapter house.

“I think it’s gonna be really nice to help bring the sorority closer together, because we can have this communal place where we can all gather,” Fischer said. “I hope that the house will bring everyone closer together and make the sisterhood stronger.”

The house needs to go through renovations before the members of Phi Mu begin to move in. Miraldi said that the house is structurally sound but there are some details that needs fixing.

“The house is so cute right now, but I think (the renovation) is for catering the cues and needs for Phi Mu.” Fischer said.

The renovation, however, has to follow certain guidelines due to the fact that the Alpha Rho Chi chapter house is a nationally registered historical landmark. Certain aspects of the house are required to maintain its original design.

Miraldi said that the colored tiles, clay roofing, two tall chimneys, domed ceilings and fireplace are not to be changed. The Alpha Rho Chi sign outside the house will likely be covered, but not removed.

Coleman, however, thinks that this would not hinder the renovation for the most part, and that Phi Mu will be putting their Greek letters on the outside of the house.

Miraldi said that Alpha Rho Chi will focus on recruiting more members so they can take back the house after three years.

“We’re a really great fraternity and losing the house is unfortunate, but we’re taking this opportunity to really grow and expand,” Miraldi said.