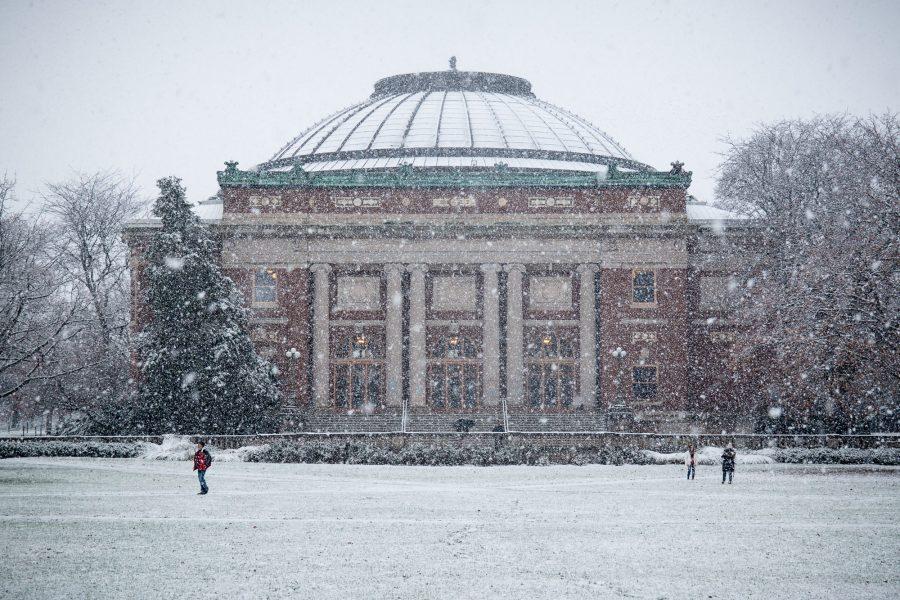 A photo of Foellinger Auditorium in the snow on Dec. 4. University’s Winter Session will be effective in the 2017-2018 academic year.

The Academic Senate passed a proposal on April 3 to establish the University’s winter session as an officially recognized academic term, effective in the 2017-2018 academic year.

The winter term will begin on Friday, Dec. 15, after the fall semester of 2017. The term will end on Saturday, Jan. 13, before the spring semester of 2018 begins. Student registration for the term is expected to open up in November.

According to the proposal, the term will be “an option for students who cannot get a seat in the course during regular semesters because of its high enrollment; or for those who are considering a double major, a summer internship, and/or wish to shorten their time-to-degree completion.”

“We want to benefit students in their studies, so they can finish the requirements on their degrees, or even minors more efficiently,” Frank Liu, business administration professor and sponsor of the proposal, previously told The Daily Illini.

There are several issues beyond the committee’s control, such as which department will offer courses and which students decide to take those courses.

It is up to colleges and departments to determine what courses they’ll offer in the winter term, said Bettina Francis, associate professor in the Department of Entomology and chair of the Senate Committee on Educational Policy.

“Departments know when they have too many students for their courses during regular semesters, so it would be reasonable for them to offer those courses during winter session if the courses are appropriate,” Francis said.

Due to the shorter length of winter session compared to regular semesters, courses that require term papers or extended research are not considered to be good candidates for the winter session. Overview and introductory courses would be better suited, Francis said.

The official winter term is expected to maintain its one-class per term policy, as established in previous years. The courses being taught will be similar to the courses taught in the fall, spring and summer.

“The major difference should be in the fact that students are concentrating on a single course and are intensively studying that course,” Francis said.

The winter session launched in 2014 as a pilot program, with only eight online classes and 980 students. Three years later, it has grown to 24 classes with 1,819 students.

The initial trial period ended at the start of 2017, generating a total of $5.8 million for participating colleges during its three-year pilot program.

However, the cost of winter session also raised some concerns. Different from regular semesters, winter session requires students to pay by credit hours. Also, there is no financial aid offered for the winter session.

“It means that students who are better off will be able to afford the tuition for the winter session, and students who don’t have the money beyond their regular tuition will not be able to take it,” Francis said. “This is something of an equity issue. I believe there are concerns about that in the administration.”