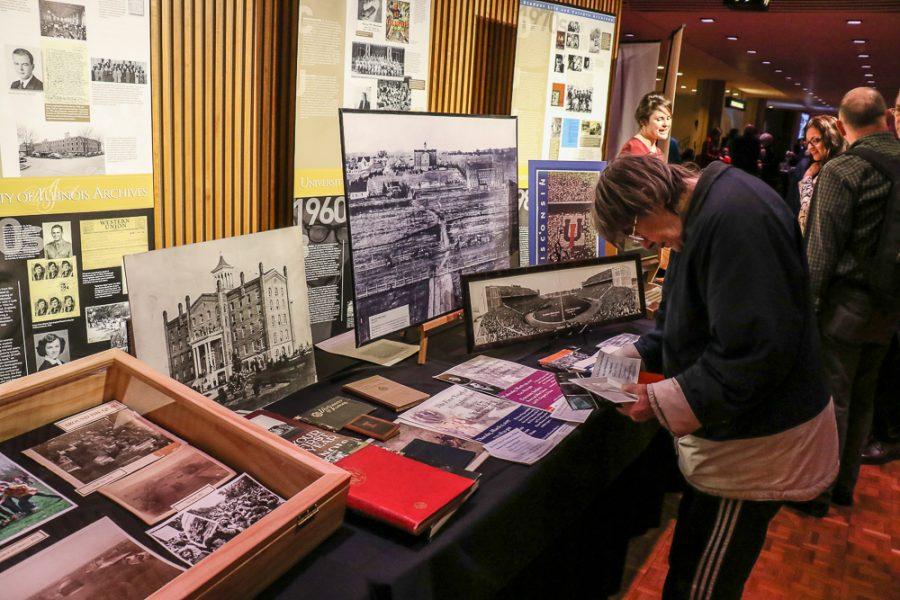 Sesquicentennial ceremony attendees examine documents from the University Archives at the Krannert Center on Feb. 28.

The National Endowment for the Humanities (NEH)awarded the University’s archives a grant necessary to develop a model web portal and analysis engine, which would allow access to any material related to the cybernetics field.

Digitization is the process by which analog media is transformed into digital form.

“Traditionally, much of the material that archives held were paper-based or in analog format, though increasingly, archives are acquiring and preserving born-digital records,” Anderson said.

The University and three other institutions — the British Library, the American Philosophical Society and the Massachusetts Institute of Technology — make up the Humanities Collections and Reference Resources Foundations program.

The program, “The Cybernetics Thought Collective: A History of Science and Technology Portal Project,” focuses on researching the history of cybernetics.

Anderson said the University, along with the three other institutions, will focus on uniting these materials to facilitate the study of the history of cybernetics and to help researchers better understand how the four founding members of cybernetics influenced each other’s ideas and created a community, or a “thought collective,” of scientific exchange.

Digital records are records that are in a format that can be processed by a computer. Once records are in a digital format, they can be used in a much more flexible manner than traditional records.

“Digitization provides an important means to make archival materials more widely available on the web, especially to researchers who might not be able to travel to Urbana for onsite research,” Anderson said. “It also enables us to unite geographically-dispersed materials, which is one of the major goals for this NEH-funded project.”

Similarly, the “Thought Collective,” a scientific group that focuses on the examination of cybernetics, will have access to materials that detail the history of cybernetics. The group includes scientists affiliated with the Biological Computer Laboratory at the University.

In 1958, Professor Heinz von Foerster established the Biological Computer Laboratory, an interdisciplinary research space that fostered the development of cybernetic ideas and experiments.

Although the laboratory only existed for a little over a decade, its legacy continues to live on, not only through the archival records preserved by the Archives but also through modern interdisciplinary scientific and artistic explorations on campus.

Cybernetics is regarded as one of the most important scientific movements of the 20th century.

“Cybernetics was by its very nature trans-disciplinary, as it brought together scholars from a wide variety of disciplines who were interested in similar questions about control, communication and feedback in both organisms and machines,” Anderson said.

Because it was so interdisciplinary, it has had a deep and lasting impact on many disciplines and promoted the cross-pollination of ideas.

“It’s important to understand this legacy and to make available the primary sources that shed light on the evolution of cybernetics and the ideas of the scientists for whom it was a disciplinary home,” Anderson said.

The history of cybernetics is also important to those wishing to study the broader history of innovative research at the University.

“Interest in the history of cybernetics draws scholars from around the world, who come not only to the University of Illinois Archives to study the Heinz von Foerster Papers and the records of the Biological Computer Laboratory but who also visit other repositories which hold the research papers of cyberneticists,” Anderson said.

Those repositories include the Norbert Wiener Papers at the MIT Institute Archives & Special Collections, the W. Ross Ashby Papers at the British Library, and the Warren S. McCulloch Papers at the American Philosophical Society.

Kevin Delgado and Jessica Berbey contributed to this report.