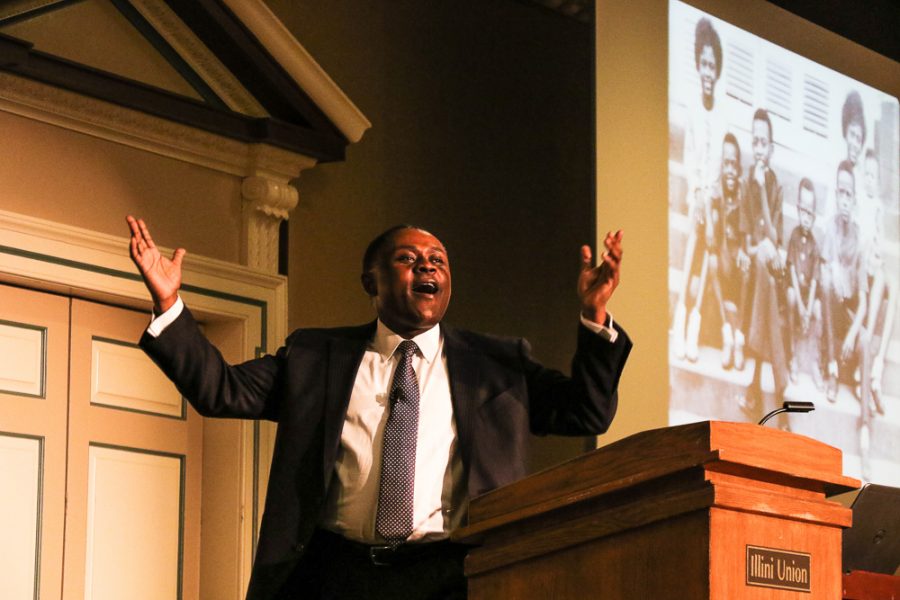 Dr. Bennet Omalu, sports medicine researcher, speaks about his struggle with depression and alcoholism, emigrating from Nigeria and embracing his individuality at the Illini Union on Wednesday. The event, An Evening with Dr. Bennet Omalu, was hosted by the Illini Union Board and Phi Delta Epsilon. Omalu studies head trauma among athletes, which made a large impact in the field of sports medicine. His research inspired the 2015 film “Concussion,” which starred Will Smith.

Dr. Bennet Omalu, the sports medicine researcher who inspired the 2015 film “Concussion,” shared his life story at the Illini Union on Wednesday night.

The event was hosted by the Illini Union Board and Phi Delta Epsilon, an International Medical Fraternity.

“(The idea) was presented to us by the Organization PhiDE,” said Dixie Limbachia, Director of Enriching for Illini Union Board and sophomore in Media. “We’ve known (about his visit) since the beginning of this semester, and we’ve been doing little by little.”

Omalu is the first person to discover and publish findings of chronic traumatic encephalopathy (CTE),  a progressive degenerative disease of the brain found in athletes and others with a history of repetitive brain trauma.

Instead of focusing his speech on his research, however, Omalu spent most of the time sharing his life story. Despite facing hardships and growing up as a Nigerian refugee, Omalu went to medical school at 15 years old and became a physician at 21.

“To understand why I am standing in front of you, you need to understand my childhood,” said Omalu in his speech.

Having been born during a war, Omalu said he was psychologically traumatized. However, he managed to find his path.

“As you may notice, the darkest time of your life could be the greatest to discover who you are,” said Omalu. “In my destitution, I discovered the power of imagination, the power of knowledge and the power of education.”

In the future, the Illini Union board is hoping to bring more educational speakers and influential leaders to campus, Limbachia said.

“I think this was just one of those lectures that is very educational. He was such a powerful speaker in terms of not only the pointing on concussion and science behind it, but (also) what he actually learned in life,” Limbachia said. “So I don’t think that students of medicine just took away the fact that he was the first one to discover (CTE), they also took away a lot of life lessons.”
[email protected]