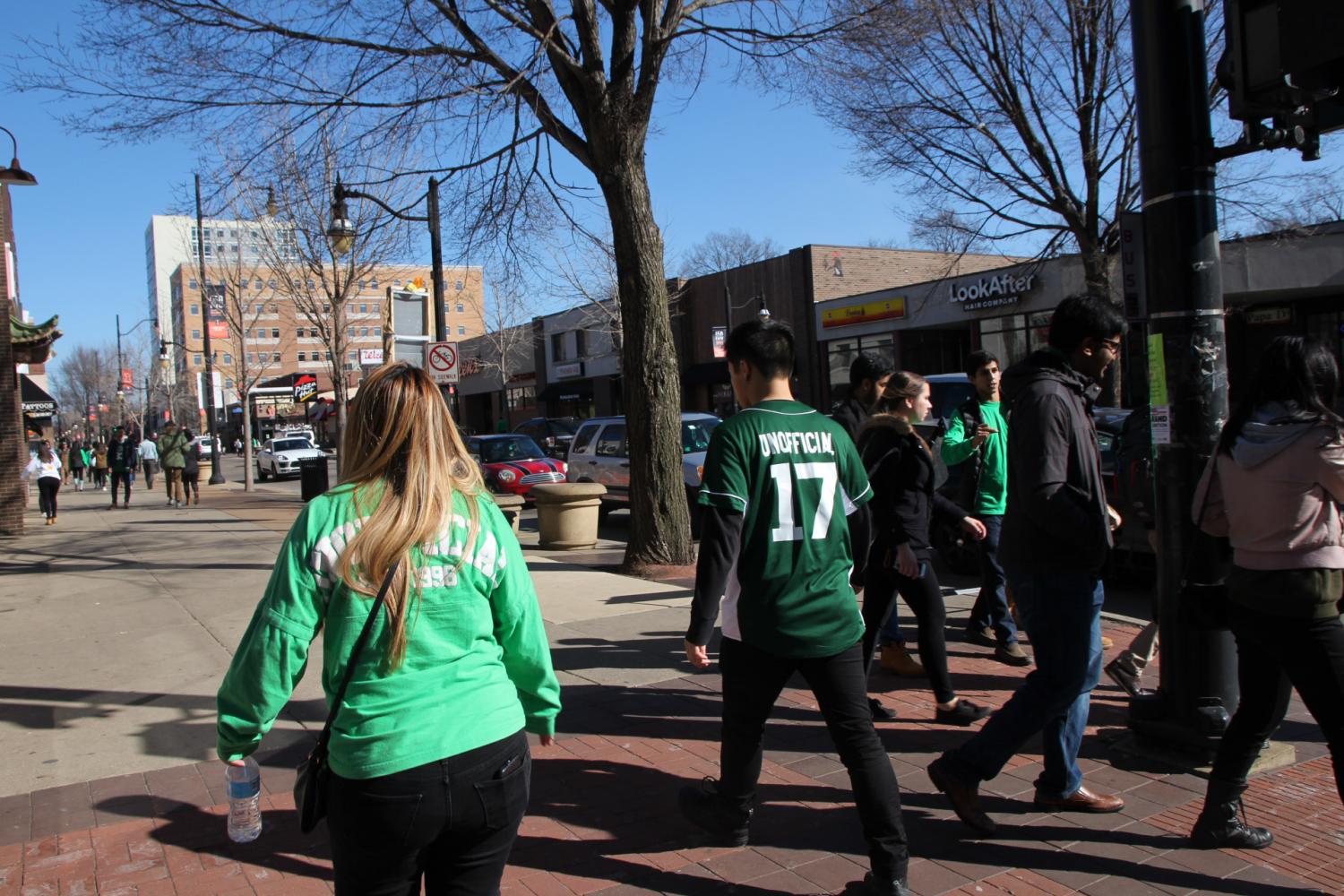 Students on Green Street during Unoffical St. Patrick's Day. In 2015, the University was ranked the No. 1 party school by the Princeton Review, and in 2016 it was ranked No. 3. The University is now ranked No. 14. The ranking is based on a survey of 80 questions and is filled out by 137,000 students from 382 schools.

Historically, the University has been ranked as a top 10 party school in The Princeton Review’s “The Best 382 Colleges.” Last year it was ranked as No. 3 in the country, and the year before, it claimed the No. 1 position.

This year, however, the University’s rankings fell to No. 14.

Robin Kaler, associate chancellor for public affairs, said the University had “not paid attention to, or even heard of” these rankings.

“They are not rankings we care about or follow because they’re not real,” Kaler said.

Some students at the University are even happy that the rankings in partying have dropped.

“It’s actually a good thing that our rankings have dropped because if the school’s reputation is all about the party life, then people are going to have negative opinions on our academics,” said Tyson Jang, sophomore in LAS.

Samuel Plummer, sophomore in Engineering, said he believes the University shouldn’t have been ranked that high – at No. 14.

“Most of our parties are small in size, or specifically at bars or in private apartments, so it’s not like the entire campus is partying together,” he said.

According to “The Princeton Review’s College Ranking Methodology,” rankings are based on the results of the 137,000 students surveyed from the 382 schools in the book.

The student survey consists of 80 questions in four sections: their university’s academics and administration, life at their college, their fellow students and themselves. Students answer by selecting one of five answer choices that range across a scale from “strongly agree” to “strongly disagree” or “excellent” to “poor.”

“The surveys are based entirely on student opinion. We go directly to who we consider to be the real college experts: enrolled college students,” said David Soto, co-author of The Princeton Review’s, “The Best 382 Colleges.”

Soto said when it comes to the party school questionnaire, they specifically ask students about alcohol and drugs on campus, popularity of sororities and fraternities and the amount of time spent studying outside of the classroom.

“We’re asking all schools the same questions,” Soto said. “We’re surveying students at the University of Illinois at Urbana-Champaign, for example, to tell us what their opinions are about life on their campus.”

He said when it comes to biased opinions, they’re only asking each school to rate their own campuses.

The Princeton Review does 62 lists of rankings, and although the “party school” list is one of the most popular lists, they believe these lists should be used as tools for students and parents to put together their best-fit university.

“Whether that’s campus culture, social scene, academics or extracurricular activities, for example, we think students and parents should use these lists, which the University of Illinois has probably been included in, to determine which university best suits them,” Soto said.

When it comes to the sudden drop in ranking, Soto suggested that it can be attributed to efforts on the part of both the administration and the student body to curb certain behaviors.

Alternately, there may be an increase on certain activities on other campuses, which can cause the yearly fluctuation in rankings.

“We are rating schools against each other every academic year, so it’s not uncommon for us to see a shift in rankings from year to year,” Soto said.

The Princeton Review profiles 382 schools, which is only 15 percent of all four-year institutions.

Soto said that based on student reports, there’s a big social scene on campus, which are things that should be reported to prospective students and parents.

“This (high ranking of social activity) doesn’t take away from our opinion of the high level of academics that are available at the University,” Soto said.