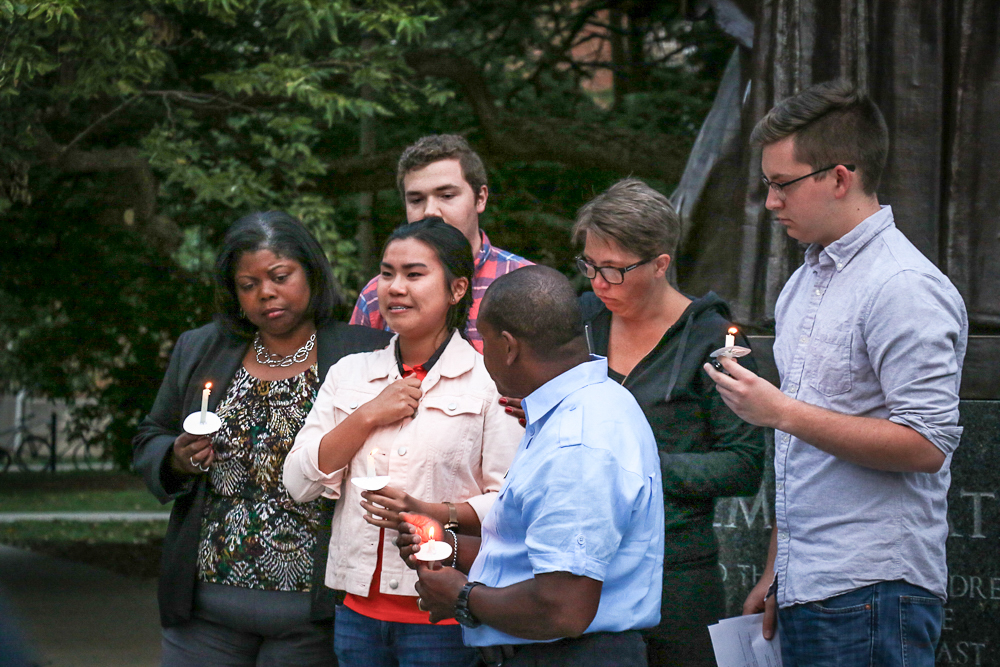 University student Grace Mladenik (center) is consoled while telling the story of her father that passed away in 9/11 to the crowd in front of Alma Mater for the 9/11 Remembrance Ceremony.

In remembrance of the Sept. 11, 2001, terrorist attacks, the Illinois Student Government organized an annual candlelight vigil at Alma Mater.

Bennett gave an impassioned speech calling for, and taking note of, the type of unity shown on that day. Brown related the emotional story of a fellow University of Missouri alum who died standing up to one of the hijackers on United Airlines Flight 93.

Also paying tribute was Illini Republicans President Jonathan Heideman, who emphasized the bravery of the first responders and of the civilian heroes of the day, and Illini Democrats President Anusha Thotakura, who called for unity and emphasized the importance of community.

Dana Meyerson, sophomore in LAS, said, “I feel like since our country is so divided right now, it’s good to have a memory that brings us together and reminds us that we have more in common than we do differences.”

“This is the only time, in my generation and in my parent’s generation, that America has been attacked,” said Sam Leroy, speaker of the Student Senate.

“It is important to remember the lives that were lost and, as people have said tonight, the sacrifices made by the first responders and by common citizens,” Leroy said. “Regular people standing up to save lives is a show of strength and unity that we need to remember.”

Beck believes there is more to remember on this day.

“It’s not just about the victims,” Beck said. “It’s about commemorating what the victims would want us to do in order to carry on.”