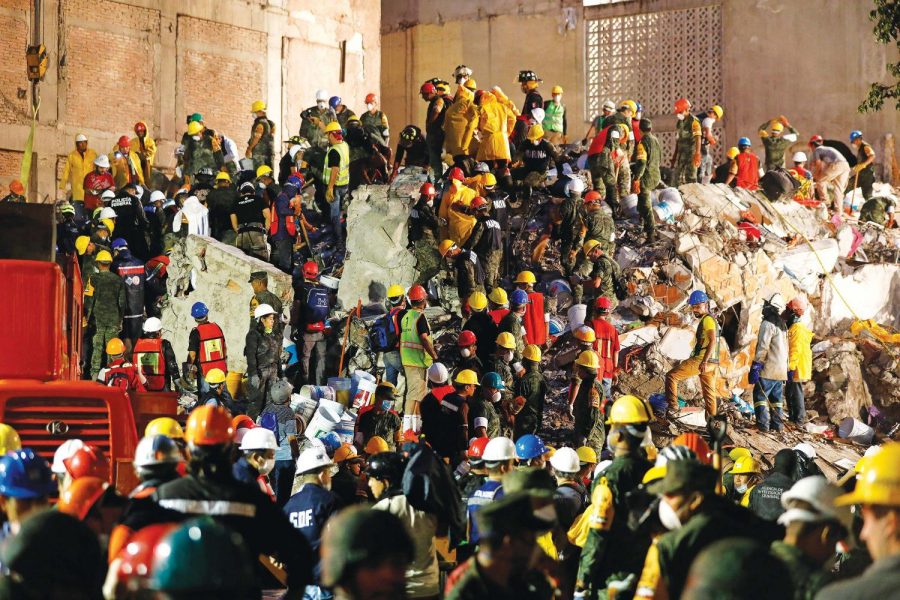 Rescue teams working at night continue to look for people trapped underneath the rubble of a collapsed six-story residential building in Colonia Condesa, in Mexico City, on Sept. 20.

On Sept. 19, the people of Mexico suffered as a 7.1 earthquake collapsed buildings and forced many people to abandon their homes. That devastation was not lost on the University as family members of professors lost everything.

Elvira de Mejia, professor of Food Science, said her brother is currently being housed in Mexico City with his son after losing his home to the earthquake.

“He (has) lost everything so far, (and) they don’t know if it’s going to be recovered or if it’s a complete loss. It has been (a) very tragic event for many people,” Mejia said.

At least 355 people died as a result of the earthquake, according to the United States Agency of International Development. As of Sept. 21, the international media reported that the earthquake had injured an estimated 1,900 people and damaged more than 20,000 buildings across central Mexico.

Romero said she lives in Cuernavaca, Mexico, which is about 70 miles away from the epicenter. The earthquake caused one of the walls in her house to crack.

“She keeps saying, (that she) wasn’t the worst affected because at least she can deal with it,” he said.

Mejia’s family has been facing trouble obtaining certain materials that were lost in the debris has been an ongoing struggle as well.

This was not the only earthquake that Mejia’s family has faced, as they were also affected by a similar earthquake 32 years ago.

“I was not there but when I (went) to see my mother, again there were many losses, buildings destroyed and many, many people died at that time,” Mejia said.

With the high fatality rate the earthquake caused, Mejia said she is just happy that her family is alive and has tried looking at the situation with a more positive outlook.

“As always in this event, humanity comes together and (people) help each other,” Mejia said. “And that was seen at least through TV and what my brother was telling me, that people help each other and try to comfort each other. Many countries came to try to help, so, that’s nice to see humanity coming together and be sensitive to the pain of others.”