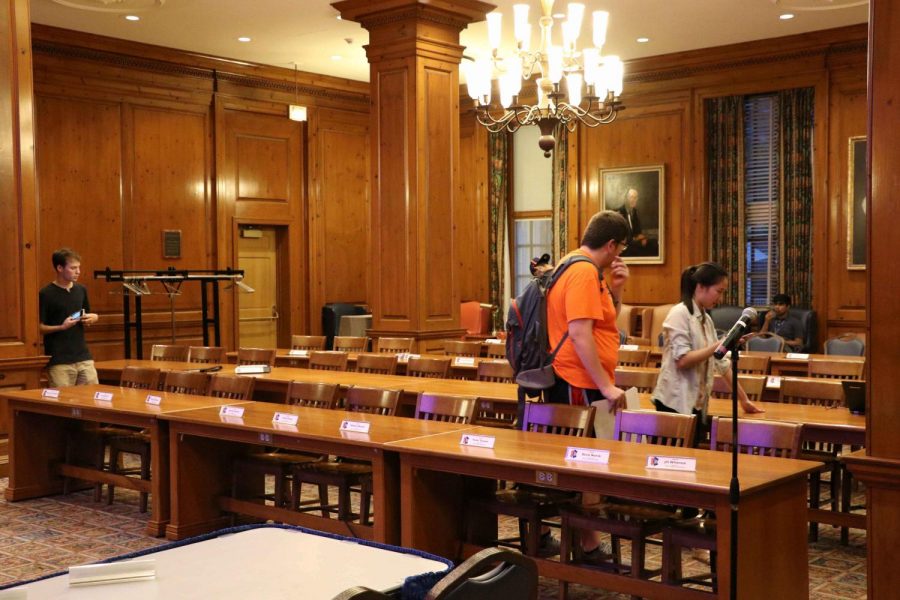 Students setting up name plates for each student senator prior to the meeting.

Two student body executive members are following through on their campaign promise of focusing on sexual assault prevention.

The initiative provides support for survivors and sees where the University is lacking by talking to different organizations on campus who are affected by sexual assault, Shamseldin said.

The department will create a task force involving the “Women’s Resources Center, LGTBQ center, the cultural centers, of course students, different sexual assault organizations,” Shamseldin said. The group will then “move (the) agenda in that sense.”

The department plans to oversee the work of other sexual assault organizations, including It’s On Us, a campaign created to make sexual assault victims feel safe on college campuses. The It’s On Us campaign has created controversy before at the University.

ISG Senator Tara Chattoraj, senior in LAS, said that she is not a big fan of It’s On Us because it is very bystander oriented.

“It’s really hard to get a large number of people involved in a conversation about bystanders, as opposed to just sign a pledge and you get a free t-shirt,” said Chattoraj.

“We really just want to push the goals of other sexual assault groups and prevent sexual assault on our very own campus, because one in five women on our campus is assaulted, and the numbers don’t seem to be going down,” Shamseldin said. “Clearly this university is not doing enough.”

The sexual assault department is a permanent committee and is the only permanent department that has been created by ISG, Shamseldin said.

The department hopes to be expanded to all of Champaign and Urbana, Domanski said. He wants to make sure all students, not just those living directly on campus, can receive help from the SAPD department.

“I want this department to be for students, and the students are not just located in Champaign campus town or downtown Champaign, but also Urbana,” said Domanski.

He said he wants this department to bring awareness to the things going on around campus and to create allies for victims.

“We wanted to be there for the survivors of these events, and we want to show that this is not okay what’s going on here,” Domanski said.

Chattoraj hopes that more survivors will get involved in the conversation about sexual assault.

“I would encourage more survivors, when they are comfortable, to really get involved,” Chattoraj said. “I think it is really important that we keep including the voices of survivors in these discussions because often times they’re not and that worries me.”

Chattoraj said that there are a lot of great organizations and people working with the department and has high hopes that it will succeed.