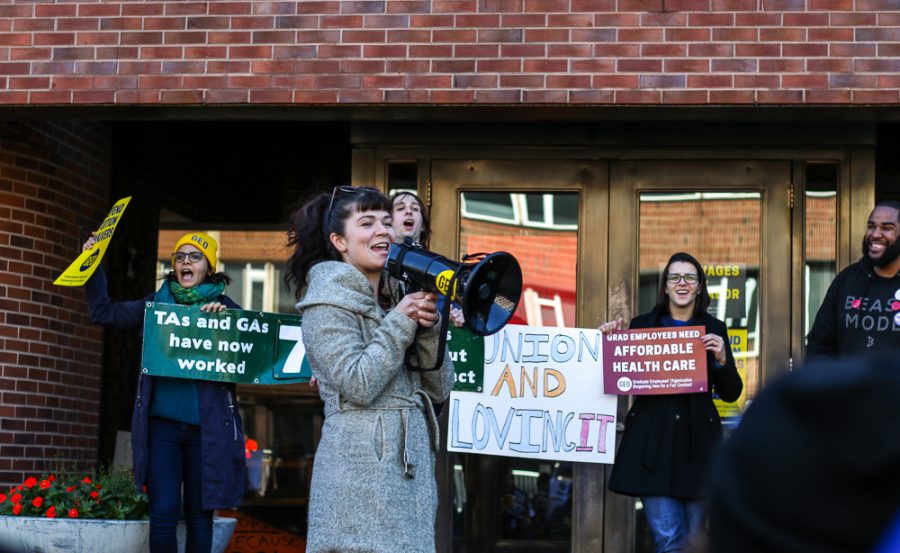 Christina De Angelo, instructor in the Department of Spanish and Portuguese, speaks at the Graduate Employees' Organization protest in front of the Swanlund Administration Building on Thursday.

The Graduate Employees’ Organization gathered in front of the Swanlund Administration Building to protest 72 days without a contract from the administration. The GEO represents graduate and teaching assistants on campus.

Andy Bowman, assistant director of the undergraduate rhetoric program and member of GEO, said they are protesting to get their voices heard since they have not been making enough progress with attaining contracts.

“We are just out here today to get a fair contract. We’ve been bargaining with the administration since March and today is our 72nd day without a contract,” said Maria Garth, GEO’s communications officer and TA for art history. “We are out here trying to get fair wages (and) affordable health care.”

The members are also seeking tuition waivers and childcare subsidies.

“I have a lot of friends that are TAs and care a lot about their pay and being able to support themselves. I like to support them and their concerns,” said Josh Leveillee, graduate research assistant and Ph.D. student in Engineering.

Chants such as, “Whose university? Our university! Union! Power! We need you to stand with us in solidarity!” and “What do we want? Contracts! When do we want them? Now!” were among the chants being shouted.