An inside look at one night on SafeWalks patrol 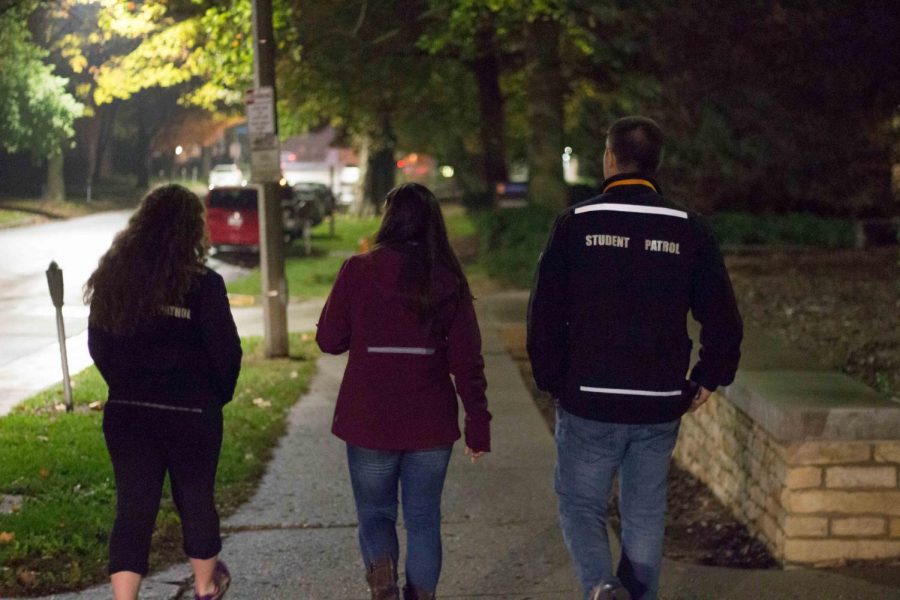 Student Alyssa Pappas walks east on Springfield Avenue with Student Patrol officers Hannah McCullough and Zach Armstrong on Nov. 4. SafeWalks is a service mentioned by assistant Features editor Marissa to take advantage of while on campus.

On Nov. 4, I walked with two Student Patrol officers, who handle SafeWalks on campus. I was led by Hannah McCullough, senior in ACES, and Zach Armstrong, senior in LAS.

The officer’s job includes escorting those who request a SafeWalk, being on the lookout for suspicious activity and warning those who have received noise complaints.

“We are trying to help everyone in as many ways as possible. Just by us going up and talking to people, we are definitely helping prevent sexual assaults and other crimes on campus,” Armstrong said.

Their shifts go from 9 p.m. to 3 a.m. and they are scheduled to work every three days.

I arrived at the University of Illinois Public Safety Building at 9:43 p.m.

10 p.m.– Armstrong, McCullough and I headed to the Main Quad for building checks to make sure doors were locked and that there was no suspicious activity.

“So this part of the job, the building checks, is primarily to make sure that doors that are supposed to be locked are locked, we don’t see any suspicious activity, no broken windows or odd lights on that shouldn’t be,” McCullough said.

10:41 p.m.– While walking past a parking garage by Third and Daniel streets, they noticed a male holding a female up against a dumpster. Once they approached them, it was apparent the female was highly intoxicated while the male was not. Student Patrol escorted the woman safely back into her apartment.

“The majority of students on campus are really appreciative of us. Some will even come up to us during a shift and be like, ‘Thanks for doing SafeWalks,’ and we really appreciate it,” Armstrong said.

11:28 p.m.– They got to Jimmy John’s, then were interrupted by a noise complaint after being in the restaurant for two minutes.

11:30 p.m.– Armstrong, McCullough and I joined two other Student Patrol officers who were ‘party patrol,’ to help give out noise complaint warnings. They did so by driving around in a department vehicle.

11:39 p.m.– The noise complaint came from the top floor of the 202 E. Green St. apartment building. Once they got to the apartment where the loud music was coming from, they knocked on the door and issued the owner of the apartment a warning. They weren’t in trouble; the officers just needed their information in case a noise complaint occurred again.

12:40 a.m.– They found a man throwing up with his friend supporting him. Another man was found urinating in a bush. They yelled at the man urinating and he left. They followed the other man who had thrown up. He made it home with the help of his friend.

“Basically how I approach it is if I see something that I think is suspicious, there’s no reason why, as Student Patrol officers, we can’t approach the situation,” Armstrong said.

12:53 a.m.– They saw a woman being carried by a man. Eventually the woman was able to be led by the man and not be carried anymore. They then approached the couple, who both knew each other and where they were going, so they proceeded to let him walk her home.

1:25 a.m.– We got into a safety patrol van, along with Daniel Kunde, team leader and senior in LAS. They drove around to look for activity and to check parking garages.

1:44 a.m.– They then got a call for a SafeWalk while we were in the car, but they gave it to other Student Patrol officers so we could patrol around the time the bars close.

1:58 a.m.– They stayed by Third and John streets to wait for the bars to close.

1:04 a.m. (daylight saving time)– They saw a guy urinating in a bush with a girl waiting on the sidewalk by him. Armstrong told the man to move along, to which the man flipped him off while yelling vulgar things at him.

1:20 a.m.– They headed over to the parking garage on Sixth and John streets and looked for suspicious activity. They observed an intoxicated couple, and the female left the male and got into a car. They went to ask the guy if she knew the people in the car she got into, and he said he didn’t know her. He said she might have known the people in the car, but was not sure. They took down his information and let the rest of patrol know the description of the car.

1:39 a.m.– They waited to be picked up because it was the end of their shift.

1:48 a.m.– They dropped me off because they did not want me to walk home alone.