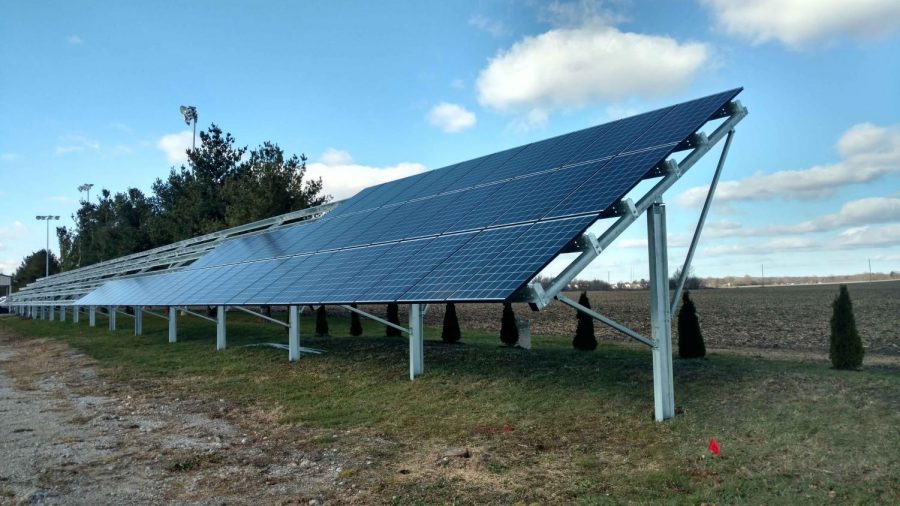 Riggs Beer Company, above, located in Urbana, is in the process of going solar. The brewery plans to rely on solar energy by the end of the year which will cost about $240,000. Kegs of beer, below, are lined up in the brewery.

Family-owned business was started by two brothers, Matt and Darin Riggs, who grew up in Champaign County. Along with their wives, Caroline and Gail Riggs, respectively, they opened up Riggs Beer Company in 2015.

The inspiration for the implementation of solar energy came when Matt was working at a brewery in Germany.

“Early on, before we started the business, I’d been interested in solar. My wife and I lived in Germany a long time and there, solar energy is everywhere you look,” Matt said. “I said if we ever go home in Illinois and open a brewery, I want to go solar.”

When they first opened Riggs Brewing Company, Matt said they were spending an average of $1,000 a month on their electricity bill.

“We knew it was getting more affordable, and once we saw the business was on its feet, we decided to go for it,” Matt said.

However, this decision did not come without its challenges.

Matt said this project will cost somewhere around $240,000, which would have been way too much money for a business only open for a year and a half.

“For such a young business, conventional bank loans would not have lent to us. We had to go through a unique option called solar leasing,” he said.

They are renting their solar energy from a company called Illini Solar Leasing, run by Dan Maloney.

Illini Solar Leasing rents the system out to Riggs Brewing Company, and after a few years of leasing it, they have the option to buy it.

“It offers a lot of different ways for businesses to take advantage of solar energy,” Maloney said.

He hopes to make solar energy financially viable and encourages others to invest in solar energy.

“Eventually, when we’ve paid off the system, all the electricity after that is essentially free. Initially we have a larger expense,” Caroline said. “We pay by the kilowatt an hour, but once you’ve paid off your system you’re still generating electricity for another 10, 20 (and) 30 years.”

Matt said if they didn’t use this type of leasing, they probably could not have made their dreams for solar energy a reality for another eight years.

“For us, being a family-owned and operated business, we weren’t as interested in expanding; we wanted to know how to go solar and reduce our carbon footprint,” Matt said.

They are in the process of installing a 75.9 kilowatt solar array, with over 270 individual solar panels. Matt said the installation will help them reduce their dependency on normal electricity by 90 to 100 percent.

There will be two different solar panel arrays. One array is ground-mounted on steel beams in the Riggs Brewery parking lot. The other array has two panels that will be elevated separately in their beer garden behind the brewery.

“They will be 10 feet off the ground, so you can drink a beer, sit at the tables, and you can sit in the shade of the panels while it’s providing us with energy,” Matt said.

The construction will be completed by Dec. 24.

“It’s easy to say you care about the environment, but it’s another thing to invest your money and take a risk,” Matt said. “We hope that we can prioritize minimizing our environmental impact.”