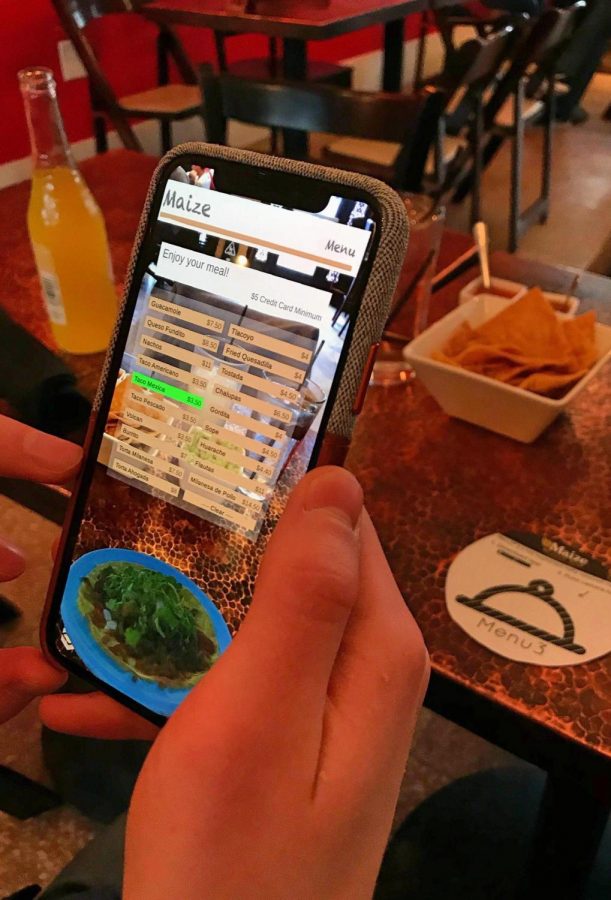 Menu3 is an app that allows diners to view menus from their phones. The app is being marketed to local restaurants.

Two University students are working with local restaurants to reimagine menus with an augmented reality app, Menu3, which allows users to view digital renditions of dishes on their table before placing an order.

Co-founders Viktor Makarskyy, junior in Engineering, and Patryk Swietek, junior in Business, partnered with Armando Sandoval, the owner of Maize, to develop their augmented reality menu.

“Once we met Armando, we knew he was the right fit. He is super visionary and innovative,” Swietek said in an email.

Makarskyy and Swietek developed special coasters for Maize that work in conjunction with their app. If diners open the app and point their phone’s camera at the coaster, the menu comes up. From there, they can select menu items to view models in front of them.

“You’re basically looking at the restaurant through your phone, but with the list of items in front of you. If you click on one of items, it pops up,” Sandoval said. “You’re able to look at them and twirl them. It’s as if it popped up in front of you and at your table.”

Sandoval said he was excited when Menu3 approached him with a design concept, and he provided them with dishes to model. Makarskyy said in an email the pair reached out to multiple restaurant owners, but Sandoval responded first.

“I thought it was amazing, so they started working with me and developing my menu into their vision for an app,” Sandoval said.

Sandoval said he thinks the application can help customers who aren’t familiar with Mexican food and Spanish-language menu items.

“Just by clicking on a dish, you are able to see exactly what it is. If it looks appetizing, you order it,” he said.

Makarskyy said he believes within a decade, consumers will be able to preview all sorts of products, from watches to clothes, in augmented reality.

“Food is a perfect opportunity (for AR previews),” he said, “We worked closely with Armando, to build a product that is meaningful and useful for both clientele and restaurants.”

Swietek said the pair has also reached out to other local restaurants, and that they hope to capture the Champaign-Urbana market because of its high density of restaurants.

“We want to eventually start allowing users to submit their own photos to have restaurants all over the world use our menus,” Swietek added.

Makarskyy and Swietek developed and published the Menu3 application for both Android and iPhone.