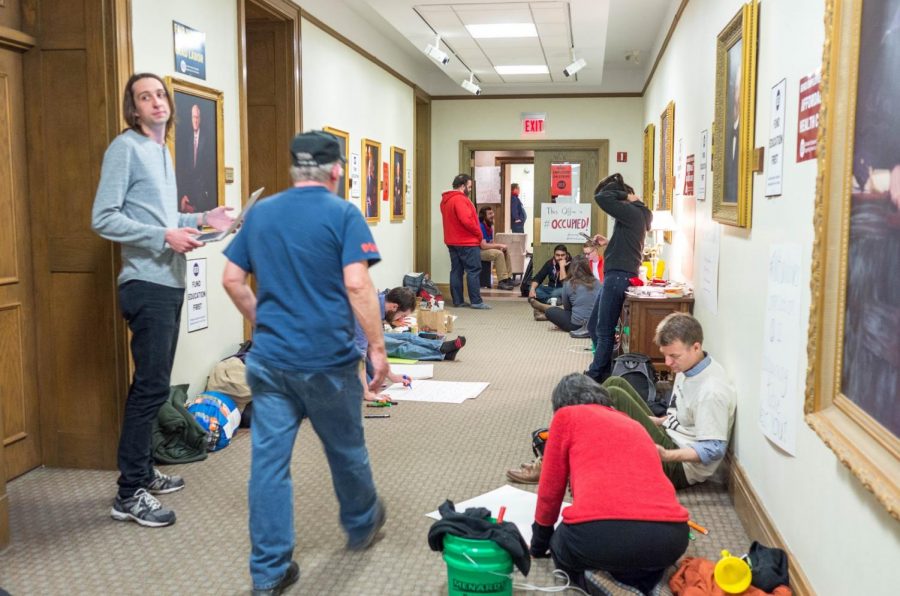 Members of the Graduate Employees’ Organization expanded their sit-in to Chancellor Robert Jones’ office at the Swanlund Administration Building on Wednesday afternoon, and GEO media liaison Ashli Anda said they aren’t leaving until an agreement is negotiated.

This comes just over 24 hours after the first occupation took place in front of University President Tim Killeen’s office in the Henry Administration Building.

About 15 or 16 people are occupying Jones’ office, Anda said, and the same 20 people from yesterday are still at Killeen’s office.

University administration and members of the GEO bargaining team have been in a bargaining session since 9 a.m. Wednesday, and Anda said she can’t estimate when it’ll end. She said there’s a possibility it could go overnight.

“They’re still in the room, and I haven’t received any updates yet,” Anda said.

“Because of our Strong strike of 10 days, the University admin has finally begun to make movement,” Wood wrote.

Anda couldn’t predict exactly what movement was made, but had an idea.

However, she was “not sure exactly what words were and language was that was being discussed.”

Members of the GEO will continue to strike and to occupy the buildings until an agreement is made.

“We’ve still been getting people out on the picket line every morning,” she said. “For now, the priority is to keep the picket line strong and make sure the occupation is going well.”