Protest in front of Alumni Center calls for fair wages 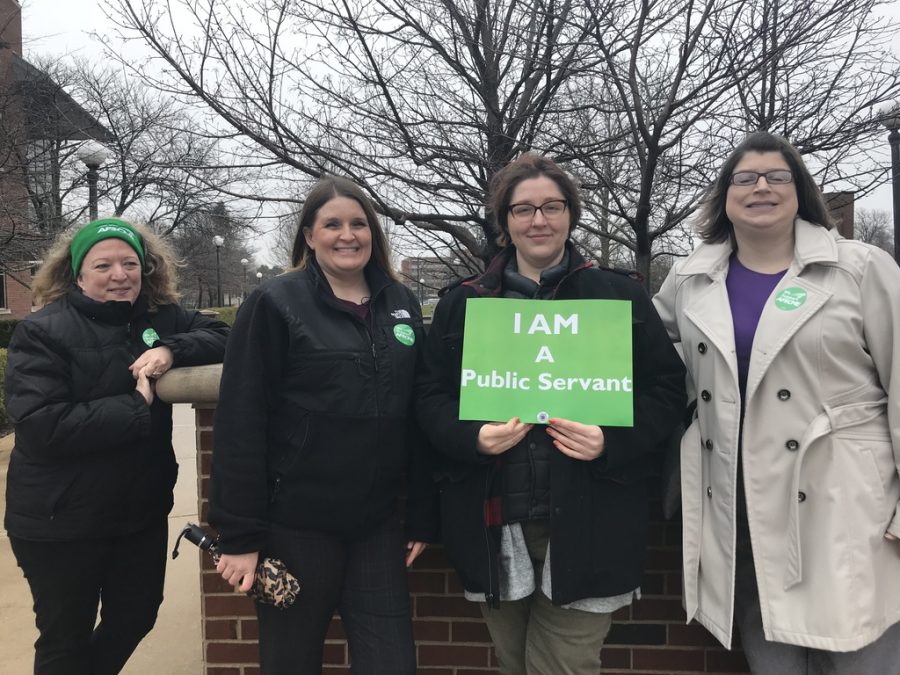 Members of ASFCME protest in front of the Alice Campbell Alumni center for fair wage and contract.

Just last week, parents signed a petition for the University administration to negotiate with the American Federation of State, County and Municipal Employees for fair wages for childcare employees at the Child Development Laboratory.

On Tuesday, members of AFSCME protested outside of the Alice Campbell Alumni Association because the administration was there for a town hall meeting, discussing the next 150 years for the University, said Nadja Robot, president of AFSCME Local 3700.

Robot said AFSCME represents about 1,200 people all around campus and throughout the state, including childcare workers, office support workers, tele-communicators and more.

She said they were outside the meeting Tuesday because they wanted to find out how they were going to be a part of the University’s next 150 years.

“Without us, nothing’s going to happen on this campus; I’m sure that office-support people set up (meetings) and without us, they would all just be lost,” Robot said.

She said the childcare workers make about $11 per hour, and they have been trying to get the University to increase their wages since they joined the union around five years ago.

“The University is just refusing; they say that there’s no money to give these people more salary,” Robot said.

Robot said when they ask for a wage increase, the administration responds by saying “they are just babysitters.”

“We really don’t want to strike,” Robot said. “Our union has never had a strike, so it’s far away from the goals right now.”

The administration and University value the AFSCME employees, said Robin Kaler, spokeswoman for the University, in an email.

“We are in ongoing, good faith negotiations,” she said. “Both sides recently requested the assistance of a federal mediator to help us bring this to a positive resolution.”