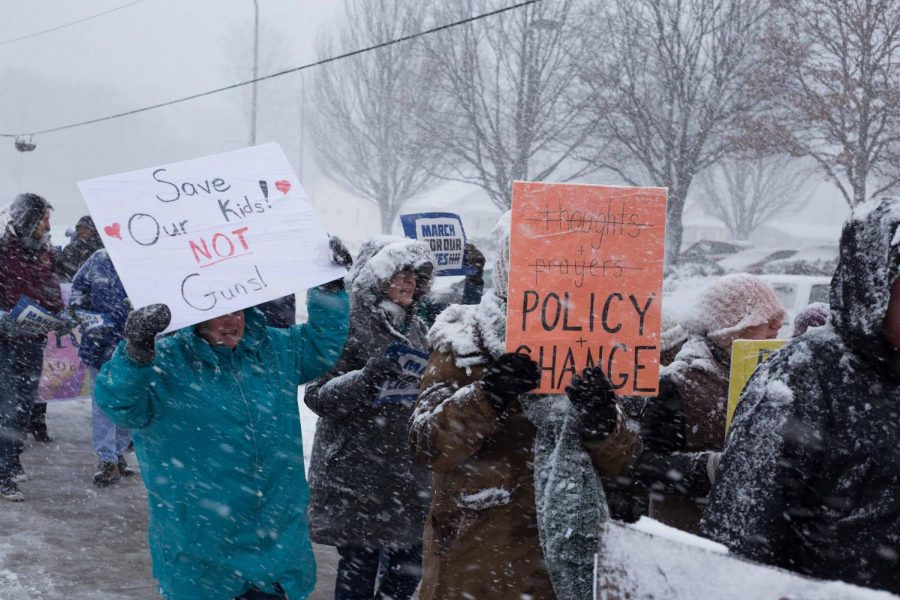 Protestors against the second amendment march during March For Our Lives in Champaign on Mar. 24, 2017.

Students from local high schools, along with UIUC Students Against Gun Violence, plan to hold a town hall on gun violence Thursday at the Champaign Public Library from 6:30 p.m. to 8:30 p.m.

The town hall has been called in response to a petition, which started as a letter to the editor of the News-Gazette, asking Congressman Rodney Davis to attend the meeting.

Maher said she and several others were at Davis’ office last week in order to extend the invitation for the meeting. While he was not there and does not usually come to in-person town hall meetings, they requested for a representative from his office to be there.

“I think constituents have a right to hear from (Davis), and he has an obligation as our representative to hear both sides of an issue,” Maher said.

According to a press release, Davis and his Democratic opponent, Betsy Dirksen Londrigan, have both been invited. However, only Londrigan has agreed to attend.

Valerie O’Brien, graduate student and member of UIUC Students Against Gun Violence, said in an email Davis told the Urbana High School student and community members who invited him that he has another obligation on Thursday night, so at this point, they do not expect him to attend the town hall.

“Whether or not Congressman Davis attends, we hope that the town hall will inform community members about both the issue and possible legislative solutions,” she said. “And that it will also give community members a forum in which they can raise questions and concerns directly with their elected representatives and other community leaders.”

The petition has gained about 400 signatures from parts of the 13th Congressional District including Champaign-Urbana, Bloomington-Normal and Edwardsville.

“This is a really big topic of interest throughout the entire district,” Maher said. “It’s not just Champaign-Urbana.”

Maher said the high school shooting that occurred in Parkland, Florida has brought these issues to people’s attention. She said sometime in the last week or two, students from Marjory Stoneman Douglas High School in Parkland requested that everybody ask their local Congress members to hold a town hall on gun violence during the April Congressional recess.

“People are concerned,” Maher said. “It’s their children in schools that are at risk.”

Maher said she thinks it is great that young students are getting politically involved in issues like gun violence.

She said decisions being made in Washington, D.C. today will impact kids for years to come, so it is important for them to be involved.

“I’m hoping both sides of the issue will be aired tomorrow night,” Maher said. “And that everybody will come away enlightened.”

Rodney Davis was not available for comments at the time of publication.