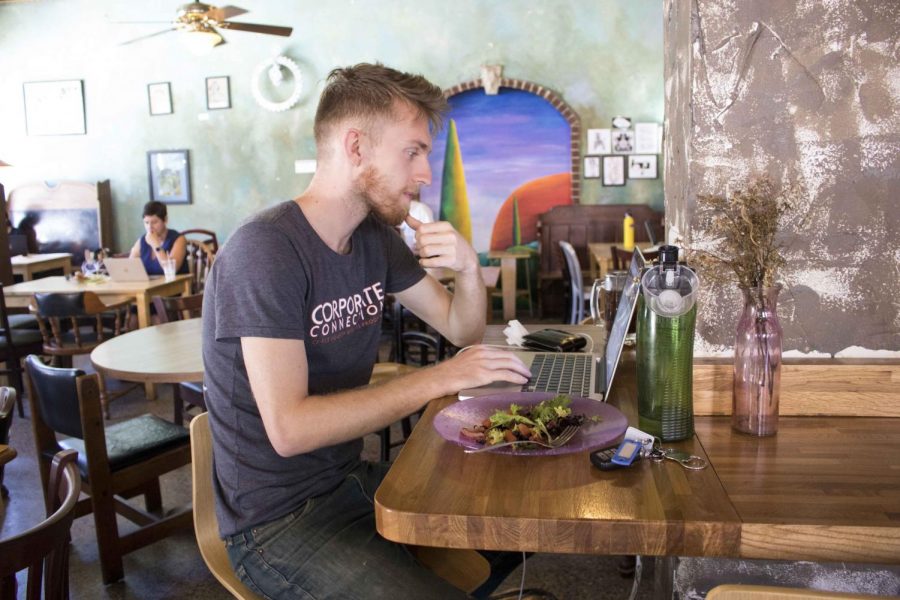 George Gunter, Senior in Civil and Environmental Engineering, takes time out of his schedule to focus on work on his laptop at Cafe Paradiso, located at 801 S Lincoln Ave in Urbana.

It has been around a week since former President Barack Obama dropped by Caffe Paradiso, but the cafe and its owners are still experiencing the impact of his surprise visit.

Dana Yun, freshman in Engineering and daughter of the cafe’s owner, said the overall sales of the cafe have gone up about 10 percent in the past week. She said there are also people who have come in the store saying they decided to pay the cafe a visit after seeing that Obama was here.

However, Yun said the family doesn’t care about the advertisement effect; they are honored because Obama was there.

“Sales went up, that’s great, if it only lasts this week and next week we go back to normal, that’s fine too. We have a lot of loyal, regular customers,” Yun said. “Other people have been saying Obama put us on the map. I think we were already on the map; a lot of people already knew about us.”

Olivia Girardi, senior in LAS, is a regular customer at Caffe Paradiso, and she happened to be there last Friday when Obama came to visit.

“I was getting coffee with someone and I was going to leave but it was pouring rain and I rode my bike, so I thought I would wait it out, and that was when Obama walked in. I had no idea he was going to be there,” Girardi said in an email.

She said Obama shook her hands and asked her a couple questions about herself. Girardi said it was very cool to meet Obama and that she would give his order at Caffe Paradiso a try.

Young Jeon, owner of Caffe Paradiso, said Obama ordered the black tea and tiramisu, which was recommended to him by Yun.

“I don’t know if it’s ‘Obama effect’ … a little more tiramisu got sold (since his visit),” Jeon said.

Jeon said she only learned an important person was going to come to Caffe Paradiso a couple hours in advance, and she was only told the person was Obama about half an hour before his arrival.

“I thought it was kind of a scam when someone came in a couple of hours before,” she said.

Jeon said she thinks Obama chose to come to Caffe Paradiso because it is a local coffee shop instead of a franchise. She also said everyone in her family is a big fan of Obama to start with, so the surprise visit was a pleasant experience.

“For a human being, I think he’s a very good person, good father, family man and overall, I mean I don’t really know much about political stuff, but as a man and a human, he’s a great person,” she said.