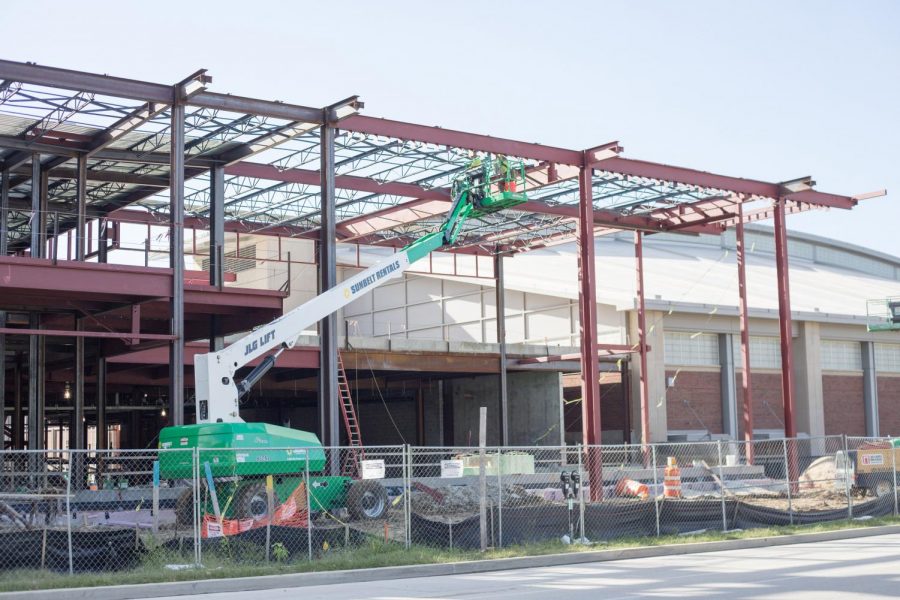 The Fighting Illini Football Performance Center, which is currently under construction at Fourth Street and Peabody Drive, will be named the Henry Dale and Betty Smith Football Center in recognition of a donation from the H.D. Smith Foundation. Out of the $20 million donation, $15 million will be dedicated to the new facility, which will be completed prior to the 2019 season.

Former leaders of the pharmaceutical company H.D. Smith Co., behind the University’s latest million-dollar donation, were asked to testify in front of Congress earlier this year to discuss their company’s alleged role in flooding West Virginia with millions of opioid pills.

Chris and Dale Smith, now of the H.D. Smith Foundation, were asked to testify for the company, a wholesale drug distributor, and provide an explanation as to why millions of prescription painkillers were shipped to West Virginia in the past decade.

The testimony came just three months before Chris and Dale Smith announced a $20 million donation to the University of Illinois Foundation through the H.D. Smith Foundation.

“From early conversations with Chris and Dale Smith about a possible transformational gift to the University, they have been very forthcoming about H.D. Smith’s involvement in a May Congressional hearing and their former company’s commitment to assisting in the identification of potential strategies to address opioid diversion, an issue of national concern,” University spokeswoman Robin Kaler said in an email.

The House Energy and Commerce Committee said the company distributed 3,000 hydrocodone (commonly known as Vicodin) tablets a day to a pharmacy in Logan County a decade ago, which is 10 times more than in 2007, according to a story from the Charleston Gazette-Mail. A total of 1.1 million pills were sent to the small town in 2008.

“While preventing the abuse of these powerful drugs, we cannot lose sight of ensuring that suffering patients have access to the prescription medications they need when they need them. But H.D. Smith was only one part of a complex supply chain, and we could not see all the information up and down the chain that could flag a potential problem,” said Chris Smith in his Congressional testimony.

“In the last three decades, H.D. Smith was never fined nor had its license suspended by the DEA,” Kaler added.

Regarding the $3.5 million paid in settlement, Kaler said it was a practical business decision. It was not a fine, she said, and added, “All of the top distributors who did business in West Virginia were included in a lawsuit, despite the fact that they do not manufacture, promote, prescribe or dispense drugs.”

“Even knowing that they likely would have a successful outcome in that case, the H.D. Smith leaders say they made the business decision to settle instead of dealing with what would have been a protracted and expensive legal battle,” Kaler said. “The University itself sometimes settles lawsuits as a sound litigation strategy.”

H.D. Smith was sold by the Smith family to AmerisourceBergen, a drug wholesale company, on Jan. 3.

“Please note that the gift was from a family foundation, not the company. As of the spring, Chris and Dale Smith no longer have any connection to the company,” Kaler said.

The $20 million donation raises questions about how the University of Illinois Foundation chooses to accept or decline funds from donors and how those funds may be used.

“The University has and will decline any gift which stipulates anything to the contrary or is inconsistent with the University mission and values,” said UI Foundation Vice Chancellor for Advancement Barry Benson in an email.

Benson declined to provide any examples for when the UI Foundation turned down donations.

With respect to the H.D. Smith Foundation gift, the $20 million was “donor directed,” or donated to go to a specific purpose.  An “overwhelming majority” of last year’s donations were donor directed, he said.

Approximately 98 percent of funds given to the UI Foundation each year are “restricted in some way,” Benson said.

While the bulk of the Smith’s donation is going to build a new football center, to be named after the Smiths’ parents, $2 million is going to the newly established Illinois Carle College of Medicine.

“While donors are certainly able to direct their philanthropic passion towards a specific purpose and destination, they do not retain any control, actual or implied, over the use of the gift once it has been accepted. For example, donors cannot direct the hiring of faculty, determine who receives a scholarship or dictate the curriculum content of an academic program,” Benson said.