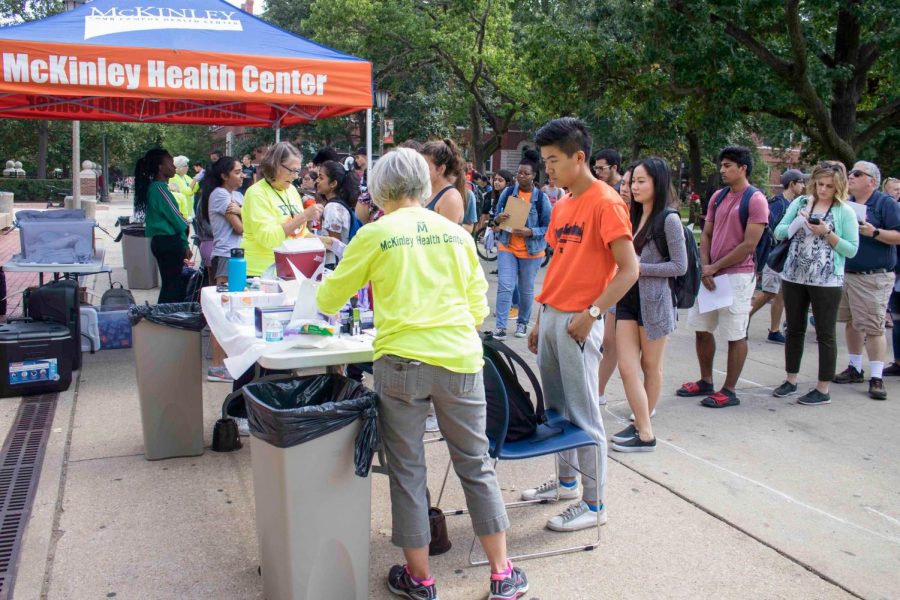 Students line up on the Main Quad to get their flu shots at McKinley Health Center’s flu shot clinic on Monday.

If students think they are noticing an increase in coughing and sniffling during classes recently, they might be onto something.

Christopher Byron Brooke, assistant professor in LAS, runs a research lab where he and his team study the replication and evolution of infectious diseases, specifically the influenza virus, which circulates campus yearly.

“It is important to note that a lot of viral infections that are not influenza virus often get described as the flu,” Brooke said. “Influenza virus is a very different virus from the viruses that cause the common cold or stomach flu.”

Brooke strongly encourages everyone to get a flu shot yearly, especially for the influenza virus, which has symptoms such as coughing and headaches.

“This minimizes your chance of getting an influenza infection and, importantly, minimizes the chance you might pass on influenza to someone else who is more vulnerable,” Brooke said.

According to its website, McKinley began administering flu shots on Sept. 17. There are approximately 40 mobile flu clinics, which are held at different days and times in student-populated areas like the Undergraduate Library and the Business Instructional Facility.

Dr. Robert Parker, director of the McKinley Health Center, said the health service fee makes the University one of the few campuses where flu shots are prepaid by students. It is in the University’s public health interest to vaccinate students, as this reduces the spread of symptoms of the virus, Parker said.

Dr. Robert Woodward, medical director at McKinley Health Center, said around 11,000 students, or 25 percent of the entire student population, receive flu shots from McKinley. Roughly 5,000 of these students get the shot at outreach events around campus.

Despite McKinley’s annual free flu shot clinics and efforts to help prevent the spread of the influenza virus, not all students choose to receive the vaccine.

“Most people do not feel like they will catch the flu, so they don’t take steps to prevent it,”  Woodward said.

Parker said students are still somewhat protected from the influenza virus even when they are not vaccinated, as long as their peers are.

Parker calls this concept herd immunity. This means only a certain percentage of a population needs to be vaccinated to protect the entire “herd” from the virus. Estimated necessary percentages may vary according to the virus’ level of infectivity and the density of the “herd” or community.

“There is some evidence in public health literature that influenza vaccination rates in the 25-percent range help break the cycle of transmission and thereby help keep others who are not vaccinated from contracting the virus,” Parker said in a follow-up email.

Flu vaccines have different effects on different people, which can be one of the reasons why some students are reluctant to receive flu shots, he said.

Parker said for a small number of people, the vaccine can cause short-term headaches, body aches or even low-grade fevers, but these symptoms subside quickly and are a small price to pay for the benefit of the vaccine.

“Our role is to encourage people to take steps to prevent the spread of the disease with immunizations and to treat those who do contract it,” Woodward said.