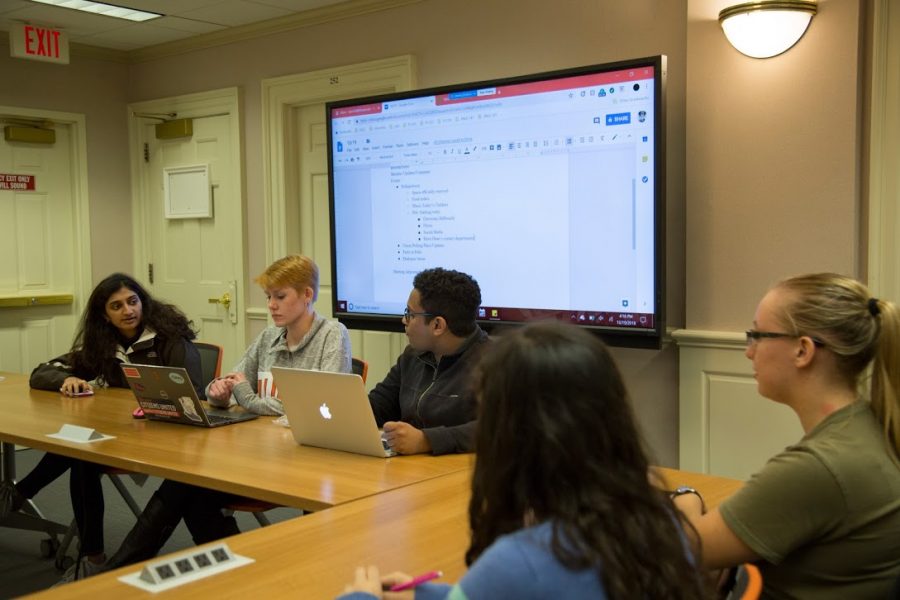 Kirsten Peterson and Rahul Raju discuss the accessibility of voting locations at the Illinois Student Senate Complex on Friday.

The Illinois Student Government Get Out The Vote task force is concerned with the visibility of the primary universal voting location on campus, which is located in Room 404 at the Illini Union.

A universal voting location is where students who live anywhere on campus and are registered in the Champaign-Urbana area can vote. Room 404 is also the only early voting location on campus.

The task force is planning to put up signs and a floor banner on the front side of the Main Quad and is considering putting floor stickers and arrows to direct students to the fourth-floor voting location.

The task force hopes its efforts will help students find Room 404 because the fourth-floor location is more difficult to find than rooms on the ground floor, said Kirsten Peterson, junior in LAS and co-chair of the task force.

She said the task force will be focusing on ways to make the location easier to find when early voting begins on Oct. 25.

Rahul Raju, senior in Engineering and co-chair of the task force, said Room 404 lacks visibility, which makes it hard for students to find.

“The issue most of all is the visibility, and I think that does a big job in getting students to vote,” Raju said.

Raju said it would be a good idea if the voting location was moved to a more visible place, such as the first floor or the basement of the Illini Union, so it would be easier for students to find.

However, the voting location on the fourth floor has already been established for this midterm election cycle.

Gordy Hulten, Champaign county clerk, said the reason why voting is held on the fourth floor of the Illini Union is because it is the only room the clerk’s office was authorized to use for early voting in the building.

Hulten said the clerk’s office also decides to use the same polling places year after year so students know where to go and are familiar with voting locations.

Illinois Street Residence Hall, which hosted a polling place in past elections, is under construction, so the ISR location will not be available for this midterm. Another campus voting location, Skelton Place, was sold to a private developer and the voting location was moved to the Cohen Hillel, the center for Jewish life.

Hulten said there are four main criteria to become a polling place: availability, compliance with the American Disability Act, ability to be secured and controlled by the government and available parking.

Hulten said if anyone has concerns about polling places, there are other options available to them.

“If any voter has concerns (about) the accessibility or location of their polling place, I would encourage them to investigate voting by mail,” Hulten said.