Students encouraged to vote at Pollapalooza 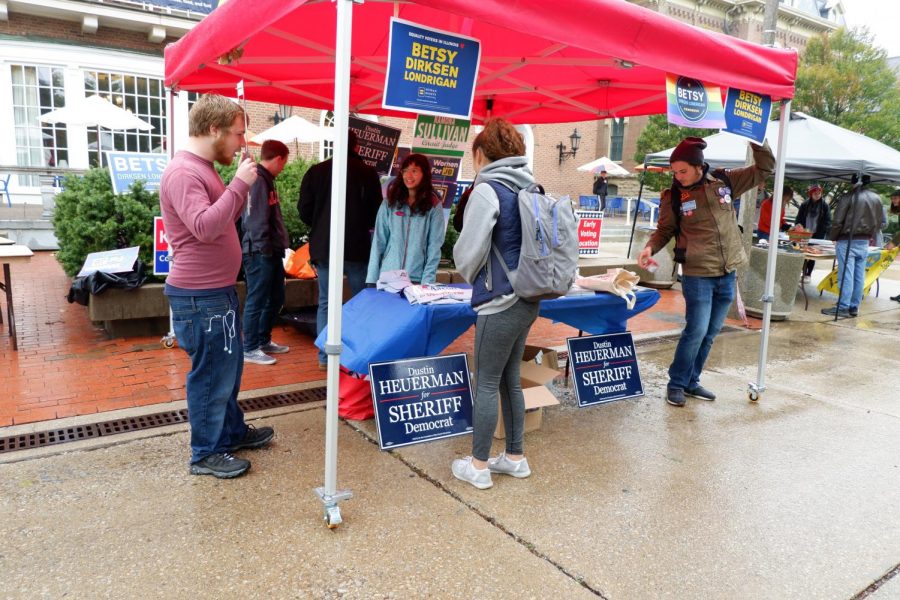 Students visit a tent set up on the Main Quad in front of the Illini Union during Pollapalooza on Friday. The event was created to encourage students to vote in the upcoming election and included information tables, free food and live music.

Students were invited to speak to local political candidates and University organizations Friday at Pollapalooza, an event aimed at motivating students to vote in the upcoming midterm elections.

The event was hosted by the Illinois Student Government at the Illini Union to help students uncertain about voting learn more about the process and who to vote for, said Kirsten Peterson, director of governmental affairs of ISG and junior in LAS.

“(Students) can get the info they want and need and have some good food and fun as well, and then go into the voting booth confident in their choices and knowing that they will have their voice heard in our democracy,” Peterson said.

Peterson said students can stop by and get as much information as they need about voting. The Champaign Voters Alliance can help anybody with questions about the local Champaign County ballot.

Although the deadline for students to register to vote has passed, Peterson said there is a lot to learn from the event.

Pollapalooza featured 20 groups, including RSOs and organizations from outside of campus. There was also live music and free food provided.

Today’s Children, a band situated in Urbana, played at Pollapalooza. Band members include Nicholas Arger, Robert Audino, Cameron Kern and Ricky Mannion. Arger said Pollapalooza will be an engaging event regardless of whether students vote or not.

“Whether you are conservative, liberal or somewhere in between, there will be food and music that will bring people together from both sides,” Arger said. “That’s what’s great about this event.”

Joshua Wolff, deputy director of governmental affairs of ISG and senior in LAS, said ISG is constantly working to create events to encourage students to vote.

“If you don’t vote, you are contributing to the breakdown of government,” Wolff said. “It is a democratic responsibility, and if people don’t vote, we don’t have a democracy.”