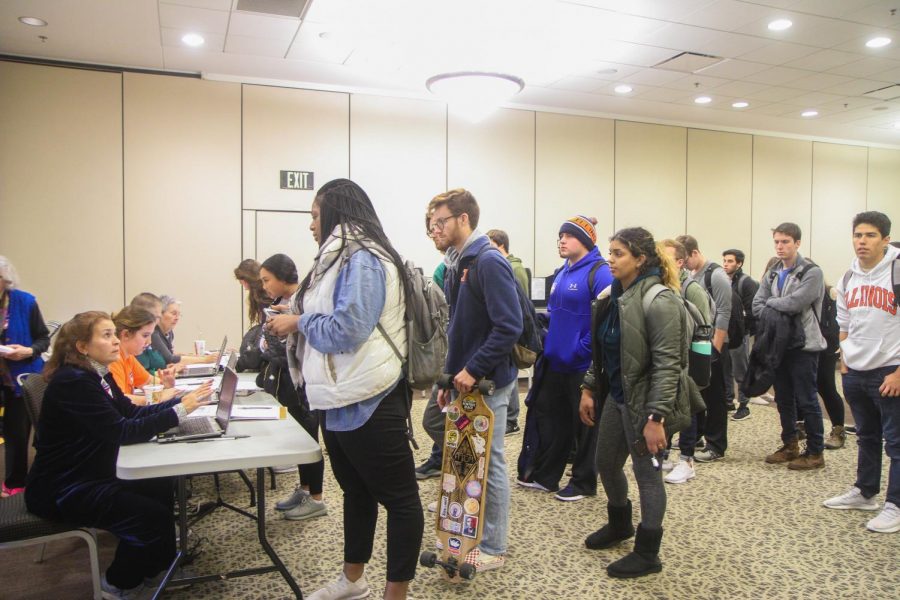 Students lined up at Ikenberry Hall to vote on election day. 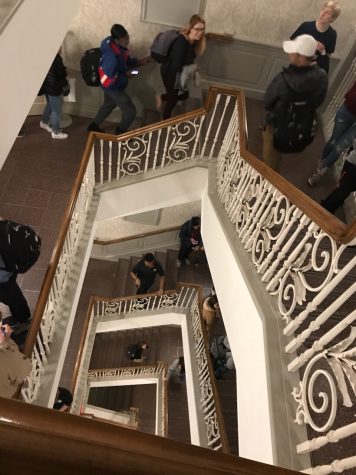 As polls come to a close, the lines at the Illini Union still extend down three flights of stairs; the estimated wait time is 45 minutes. However, Bruce Rauner, Republican candidate for state governor, has conceded to J.B Pritzker, the Democratic candidate.

If voters are in line by 7 p.m., they are still able to cast a vote.

Matthew Williams, son of circuit judge candidate Ramona Sullivan and University alumnus, was handing out flyers at the Union encouraging people to vote for his mom.

Williams said he already voted two weeks ago in order to avoid the lines on Election Day and he had talked to a few hundred people who said they had already voted.

Ramona Sullivan said she also voted the day early voting started. She has been approaching potential voters throughout the day, as well.

She said if she manages to get elected, she would be one of 14 circuit judges who is a mother.

Priyanka Balakumar, freshman in Engineering who voted at PAR, said the recent political climate is an important reason for everyone to vote, no matter what.

“I just think it is really important to vote, to be able to get your voice heard in our government,” she said.

Rachel Sun, freshman in Business who voted at PAR, said she just wants to exercise her right to vote and to express her opinions.

“I think just as a young adult, just going out and and just expressing your opinions and just voting is important,” she said. “And just getting into the routine and knowing you can make a change in the world, especially at a young age.”

Anyone going to and from polling locations can get a free ride, said Lisa Meid, communications director for CUMTD.

Illini Republicans said in an email students should vote for their future, better jobs, higher pay and lower taxes. They expect a fairly high voter turnout.

“We are glad to see a big turnout,” the RSO said. “We hope to see a Republican Congress and of course, the defeat of Betsy (Londrigan)!”

The Illini Hillel Cohen Center polling location is experiencing a smaller crowd than that at the Illini Union, and the line is moving along swiftly.

“I’m a rabbi. It may not seem like a spiritual leader would be in the forefront of getting people involved in civic engagement, but to me, I think there is no more of a sacred duty that you can do as an American citizen other then get out to vote,” Naveh said.

Naveh and a few other staff from the center have been involved in a campaign called MitzVote, which is a play on the Hebrew term “mitzvah,” meaning commandment.

“It’s a reminder that we are obligated to use our voices, so it’s been really impressive and successful, not just on our front but really (with) the students that we have been leading with. They are really taking this and running with it,” Naveh said.

Anna Sekiguchi, sophomore in ACES and volunteer at the Illini Union, said she cares about issues such as student loan debt and forgiveness and healthcare access, but she also care about expanding local polling places.

“I think we’ve seen a lot of backup here at the Illini Union,” she said. “So there really needs to be more universal polling locations in the area.”

Sekiguchi said she likes volunteering as a part of her own civic duty.

“I’ve just been handing out chips and pizza and making sure everybody knows their rights and knows how to register to vote,” she said. “Like (I give them) all of the voting information that they need to know while they’re in line, so the process goes smoothly.”

While voters at the Illini Union are experiencing long lines, other polling places, such as the Activities and Recreation Center and the Student Dining and Residential Programs Building, have a shorter wait time.

Volunteers at the Illini Union are redirecting voters to other polling locations using school buses.

Emily Wallace, graduate student in Labor and Employment Relations and volunteer for the Betsy Dirksen-Londrigan campaign, said this election is seeing some of the highest voter turnout rates.

“The only issue we’re facing right now is because we have so many students turning out, we’re having really long lines, because the polling places, especially here at the Union, were not designed or selected in a way that promotes accessibility for students,” she said.

Wallace said an issue with the long wait time for students to vote is a lot of people have to go to classes, to work and to study since it’s midterm season for both the election and in school.

“We love that students are turning out. We love that they’re coming out in full throttle,” she said. “We appreciate the county clerk giving us this additional room. It was originally just 404, but now we have 404 and 407, so they’re right next to each other upstairs.”

The Illinois Student Government has also been giving out bagels, pizza and candy to voters in line.

“During those hour-long waits, it’s been helping to incentivize people to go into the line, and we’re rewarding students afterwards,” Wallace said.

“We have a brand new freshman class, and we have a lot of things going on in politics wherever you fall on the spectrum, and so it’s a really good time for you to say, ‘This is what I believe in, and this is where I want our future to go,’” Wallace said.

Illinois voters are coming out strong today! The lines at the Illini Union are so long that volunteers have organized a bus to take 30 voters at a time to an alternative polling place. #ILLelect pic.twitter.com/hexxlMCuhb

The line at the Illini Union voting location is wrapped around four flights of stairs, and voters are lining out the front door at the University YMCA location.

The University YMCA is providing voters with free food and is organizing an Election Day Party to encourage voters to stay in line, according to a press release.

“I’ve worked at the University Y for 10 years, and I have never seen a voter turnout like this in these precincts,” said University YMCA Executive Director Mike Doyle in the press release.  “We are excited to see such incredible enthusiasm on the part of young voters and want to our part to encourage their participation in our democracy.”

Annie Reilly, junior in FAA, voted at the Illini Union for Champaign County because she didn’t receive her mail-in ballot for Chicago.

“With the local county, I spend more of my year here than at my parents’ home, so doing more research on the County Clerk and the people running for Congress really sparked my interest, and I think they will really affect me more here,” Reilly said.

Alison Morales, sophomore in LAS and first-time voter, said it is important for young people to get out and vote. She said it is really cool to be able to vote right on campus at the Union.

“I’m a child of immigrants so just hearing our president and our elected officials say stuff about my parents and me just really bugs me, so I gotta get out and change it,” Morales said.

Lines are starting to form at various campus polling locations. The fourth floor of the Illini Union is seeing the largest crowd of voters so far.

Audrey Dombro, president of Illini Democrats and junior in ACES, said she voted on the first day of early voting with State Rep. Carol Ammons.

Dombro said the Illini Democrats weren’t expecting the long line for early voting on Monday, and it kept them busy.

She said the issue that brought her to the polls is healthcare.

“Everyone needs access to quality affordable health insurance because, you know, it’s been really sad to see individual mandate repealed with the tax cuts and jobs acts,” Dombro said. “And something that’s also important to me is just immigration policy and making sure we’re not a country that’s restricted to people who need our help and who want to be here.

Jennifer Ritter, senior in Information Sciences, voted at the University YMCA. She said she tries to stay up with the news given everything happening in Washington D.C. now.

“I think that definitely has a lot of young people especially out voting,” Ritter said.

Students who are registering to vote on Election Day need to provide a photo ID and proof of residency.

The 2018 midterm election takes place Tuesday from 6 a.m. to 7 p.m.. The temperature is below 50 degrees in the morning but there is no rain. Everyone who is in line by closing time will be allowed to vote.

The early voting location at the Illini Union saw long lines of students lining up to cast their votes Monday and was one of the two busiest voting locations in the county, according to a Champaign County Clerk tweet.

Editor’s note: This is an ongoing story. Please stay with The Daily Illini for updates throughout the day. Sam Tinaglia, Alexandra Pudlo, Josh Joines and Maggie Marzonie contributed to this report.