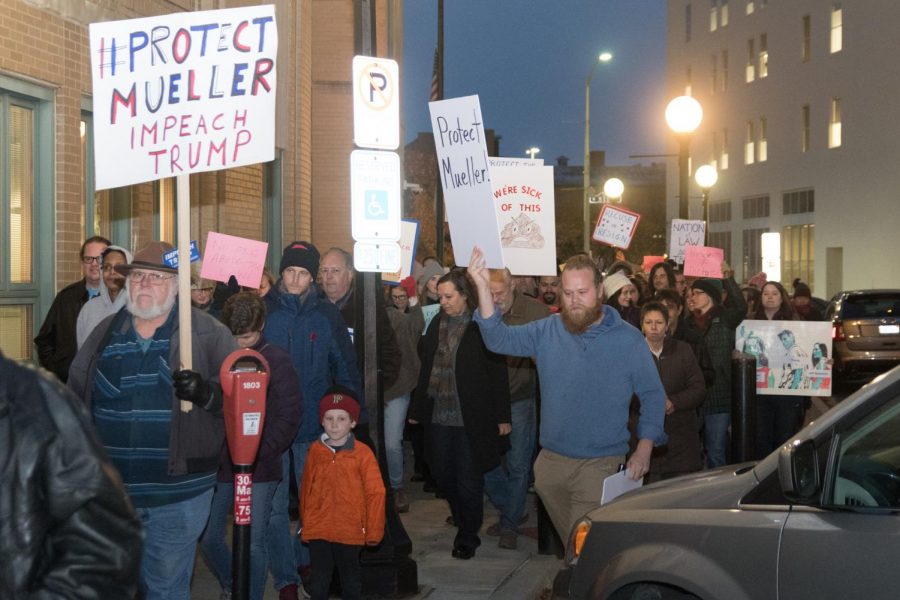 Protesters march through downtown Champaign on Thursday in response to President Trump’s decision to replace Rod Rosenstein with Acting Attorney General Matt Whitaker as the head of the Mueller probe. The Nobody is Above the Law protest was previously organized so that if President Trump were to replace the oversight of the special counsel, a rapid response series of protests would take place the next day.

Hundreds of local activists protested against President Donald Trump on Thursday, opposing his controversial decision to ask for the resignation of Attorney General Jeff Sessions, which they believe may threaten Robert Mueller’s special counsel investigation into Russian interference in the 2016 presidential election.

Nathaniel Forsythe, a volunteer with CU Indivisible, a local chapter of progressive advocacy group Indivisible, organized a rally that evening in downtown Champaign.

“Today, we saw a lot of people come out because they’re really concerned about the firing of Jeff Sessions and the move to put Matt Whitaker in charge of the special counsel investigation,” Forsythe said. “People know that Trump is trying to shut down the investigation and they don’t want that to happen.”

Protesters gathered at the Champaign city building and continued the march through downtown Champaign to West Side Park. They held signs reading “#NobodyIsAboveTheLaw,” “Protect Mueller: finish the Russia investigation” and “Mueller probe must go on.”

“People want to see the rule of law preserved and they [local protestors] want to emphasize that nobody is above that, not the president, not anybody,” Forsythe said.

The rally in Champaign was one of more than 900 protests against Trump’s actions across the U.S. They were supported by both Indivisible and MoveOn, another progressive advocacy group frequently critical of the president and the Republican Party.

Forsythe said the Champaign-Urbana community is active and wants to make a difference.

“We saw that in the election this week, and we saw that again tonight,” he said. “People are not just going to go away because the election happened; people are ready to fight and to make sure that the rule of law is obeyed in this country.”