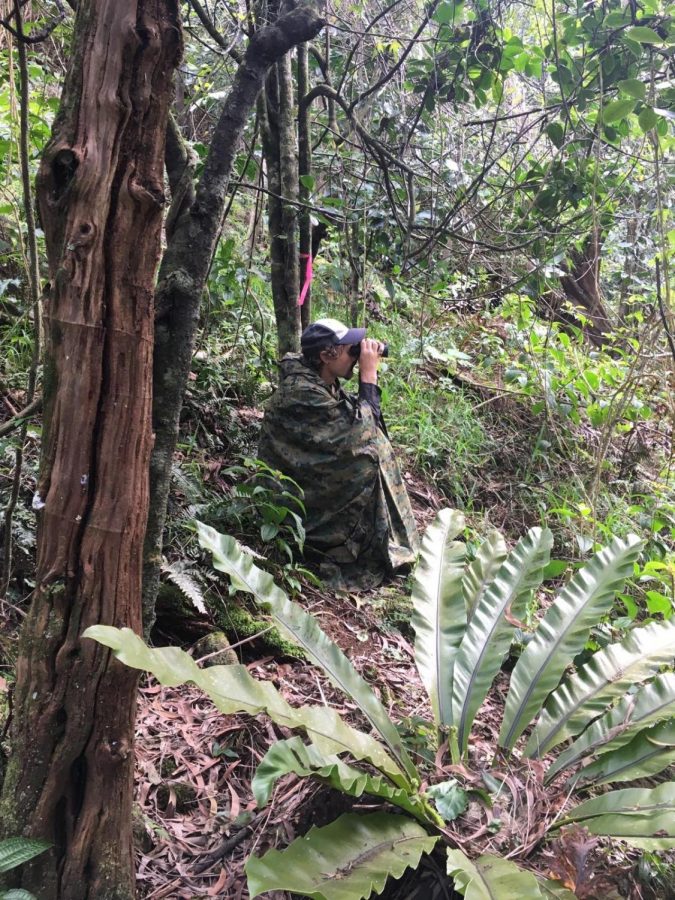 A University graduate student is leading research that may bring plant species in Oahu, Hawaii, back from the brink of extinction using bird calls.

MacDonald hypothesized projecting recorded bird calls on speakers would attract different types of birds that would, in turn, disperse seeds from the plants.

He used a microphone and multiple speakers attached to trees to test his hypothesis.

“I had binoculars and full-on camouflage because I’ve noticed they would see me and fly away,” he said. “I would sit there motionless for two hours.”

After finishing his experiment and research, MacDonald concluded recorded bird calls attract other birds to disperse seeds on endangered plant species, even if a particular bird is completely different from the extinct species that used to do the job.

“Birds do associate with other bird calls, even outside their own species when foraging — and for fruit in particular,” MacDonald said. “That behavior is important, and it can be manipulated to our advantage.”

MacDonald chose to complete his research in Oahu because his adviser, Jinelle Sperry, assistant professor in ACES, was already studying seed dispersal at that location.

“She already had a project there, and she wanted a student to work with the army and the endangered plants,” he said. “I got that position, and we kinda took it in this direction to monitor these endangered plants and try to get these birds to eat their fruits.”

However, MacDonald believes his research can  also be applied to other species of plants and animals in different areas of the world.

For example, deer living in Indomalayan systems — areas of south and southeast Asia — have been known to follow the calls of monkeys to locate food.

Michael Patrick Ward, professor in ACES, contributed to MacDonald’s research by giving him tips throughout the process.

“A lot of times, our environment is in pretty bad shape, so it has to come up to people like Sean to be creative with new ways to maintain or even enhance our environment,” Ward said.

Javier Ortiz, sophomore in FAA, said technology should be used more frequently on our environment instead of on other things.

“For instance, we focus on more space exploration than exploring our oceans, which we haven’t covered much of that,” Ortiz said. “It is more important to understand our home than a place that’s outside from a telescope.”

MacDonald emphasized the importance of being creative when it comes to doing research as a way to help our society, especially our environment.

“Think outside of the box,” MacDonald said. “It’s important to read what’s been done, but it’s also important to give it in a new direction. Just crossing connections and collaborating with people outside your department is important.”