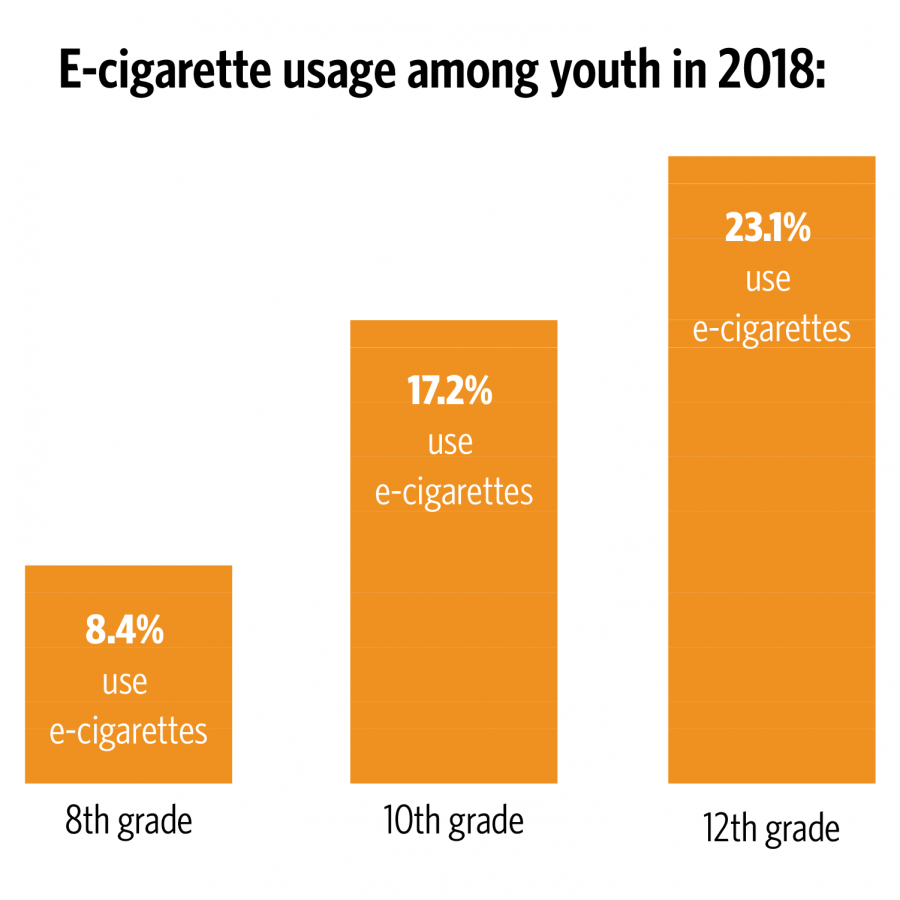 A recent survey done by the School of Social Work found the number of teenage electronic cigarette users has soared in the last two years. This finding comes shortly after the FDA recently declared e-cigarette use an epidemic.

The Illinois Youth Survey is offered to middle school and high school students all through Illinois. These surveys are released electronically or via mail, from the beginning of the year until the end of the spring semester.

The 2018’s Illinois Youth Survey had about 9,073 schools involved. Scott Hays, senior research scientist in the School of Social Work, said the survey includes students from the eighth, 10th and 12th grades, 70 percent of the surveys were completed online.

“Now in 2018, we are 27 percent. We are higher now than we’ve been in tobacco use since the last 10 years. All past reductions have essentially been wiped out by this new product, e-cigarettes, and they are delivering the same doses of nicotine as real cigarettes,” Hays said.

Hays believes teenagers are prone to e-cigarettes because of peer pressure and the lack of knowledge before using these devices. Manufacturers market these products to a younger audience to gain their attention, Hays said.

In recent news, JUUL, a popular brand of e-cigarettes, suspended the sale of flavored JUUL pods because of the problematic trend with e-cigarettes among young adults, according to The New York Times.

Within the Illinois Youth Survey, Hays said, the University Laboratory High School was asked to participate in this study, but it declined the request.

Karl Radnitzer, assistant director for the University Laboratory High School, believes it is not a local issue in high schools with the usage of e-cigarettes.

“No, I don’t think it is an issue. We heard one rumor that some kids were smoking in our student lounge, but no smoke signals at this point,” Radnitzer said.

Ricardo Munoz, freshman in DGS and a user of e-cigarettes, believes there should be a restriction with the utilization of alternatives to real cigarettes for high school students but not for college students, unless they become addicted to the device.

“To a certain extent, JUULSs and e-cigarettes should be restricted from middle schoolers, especially since I’ve seen younger kids taking hits from a JUUL like it’s nothing,” Munoz said.

Hays believes there are methods to stop the trend with e-cigarettes, and with the help of everyone, it can be possible to do so. For instance, Hays said the age to purchase these products has been raised to 21 in Springfield.

“One way is through education. To make people understand e-cigs and vape pens and acknowledge that these devices have high doses of nicotine like a packet of cigarettes,” Hays said.