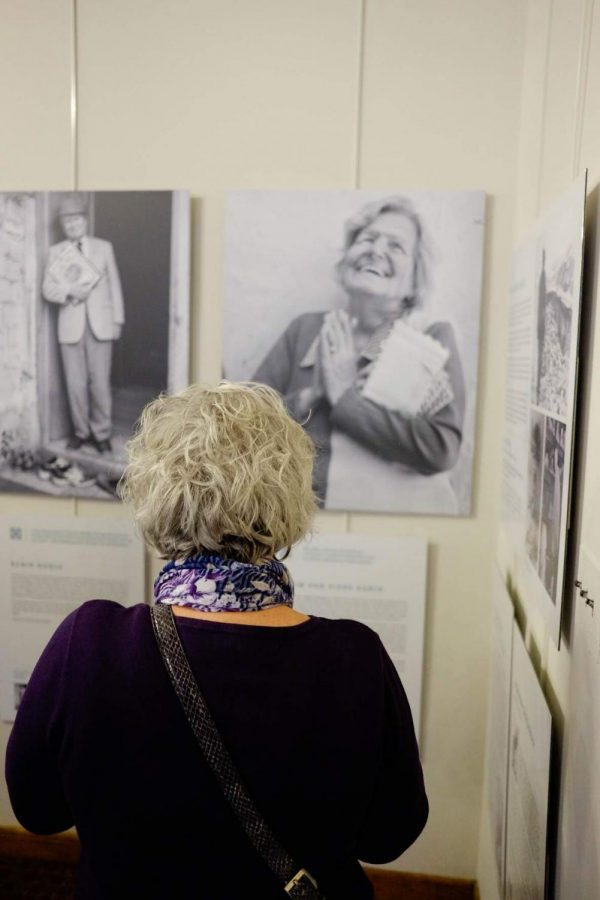 January 24, 2019. Tana Willaredt stands before photos from an exhibition called 'BESA: Code of Honor' put on in Murphy Gallery at the YMCA.

In honor of International Holocaust Remembrance Day on Sunday, the University YMCA is holding an art exhibit that shares the story of Muslim Albanians who rescued Jews during the Holocaust.

The exhibit, “Besa: A Code of Honor — Muslim Albanians Who Rescued Jews During the Holocaust,” has been in the making for two years, said Bari Goldman, director of communications at Illini Hillel Cohen Center for Jewish Life, in an email.

“Our Hillel student board at the time chose ‘Besa: A Code of Honor — Muslim Albanians who Rescued Jews During the Holocaust,’” Goldman said. “It was a unique exhibit that highlighted an incredible story of interfaith cooperation, Muslim Albanians that became righteous among nations and a Jewish community that survived the Holocaust.”

The word besa means “to keep the promise” and is an ethical code in Albania, Goldman said.

“Besa is a story of hope and faith,” Goldman said. “This exhibit should serve as a reminder to our community about the power of coexistence, inclusion and the importance of standing up to hatred.”

Among the speakers will be Imam Ousmane Sawadogo from the Central Illinois Mosque and Islamic Center, who was invited to represent the Muslim community in Champaign-Urbana.

“In my view, the significance of this event is the awareness that the Holocaust and its evil roots should not be consigned to history. Rather, they should be kept in mind as a contemporary issue in order to avoid the repetition of such an appalling crime,” Sawadogo said in an email.

Participating in events that celebrate righteousness and promote justice is an important religious duty, Sawadogo said. In addition, he believes preventing crimes like the Holocaust is everyone’s responsibility.

“The actions of those brave Muslim Albanians as well as all the courageous men and women from the Righteous Among the Nations should be the example that we all strive to live up to in our daily lives,” Sawadogo said.