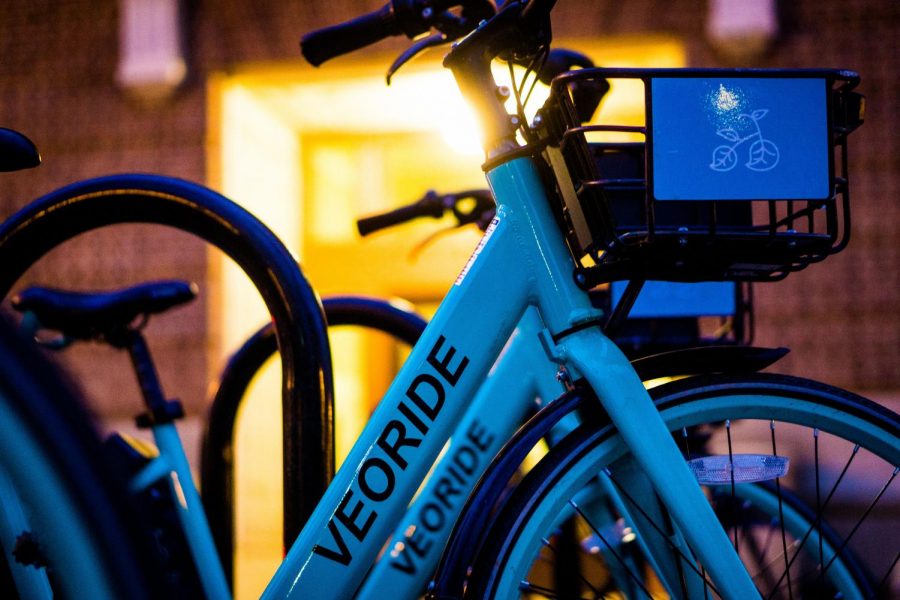 VeoRide bikes stand between Gregory and Lincoln halls on Wednesday. VeoRide will introduce electric bikes to campus in March.

VeoRide announced its plans to replace 150 of its 500 bicycles in Champaign-Urbana with electric models after students return from spring break.

This arrives after Champaign City Council members decided to renew the dockless bike sharing program for another year.

Bruce Knight, planning and development director for Champaign, said VeoRide reported nearly 165,000 rides have been taken within the community as of Feb. 5, making Champaign-Urbana the top performing VeoRide market nationally.

Linda Jackson, media representative for VeoRide, said the 150 bicycles will arrive in March.

“VeoRide aims to serve a variety of customers, and some prefer e-bikes because it’s easier to pedal longer distances,” Jackson said. “The front-drive motor can assist e-bike riders to pedal up to 18 miles per hour and responsively adjust torque to match riding conditions.”

Jackson said the battery itself is a rechargeable unit that can be replaced on the spot. When a battery needs replacing, technicians will go to the bike and swap out the battery. Each battery will last up to 68 miles.

Due to the high usage of the bicycles, council members discussed whether to raise the maximum amount of bicycles allowed per company.

Lily Wilcock, city of Urbana planner, said the community could handle 2,000 to 2,500 bikes and having these bikes could help fill transportation gaps in the community.

Some city council members said the electric bikes would allow people to travel longer distances with less effort, encouraging people to use the bikes more often. However, the idea is less appealing to some others.

Officials also touched on many issues associated with the bikes, such as the bikes being left in undesirable and inaccessible locations. They said these issues could obstruct people with disabilities from using the bikes.

At this time, VeoRide is the only bike-sharing company in the Champaign-Urbana area, but some council members oppose having a sole provider.

Knight said the city has heard from two new operators who they expect will submit applications in the coming year.

Mia Amore, freshman in LAS, said she thinks the electric bikes are a good idea and it would be cool to have them on campus.

Navya Mohlajee, sophomore in LAS, said already incorporating electric bicycles would change the feel of campus since the VeoRide bicycles are still a new addition to the campus.

“We are already changing the dynamic since we just got them,” she said.