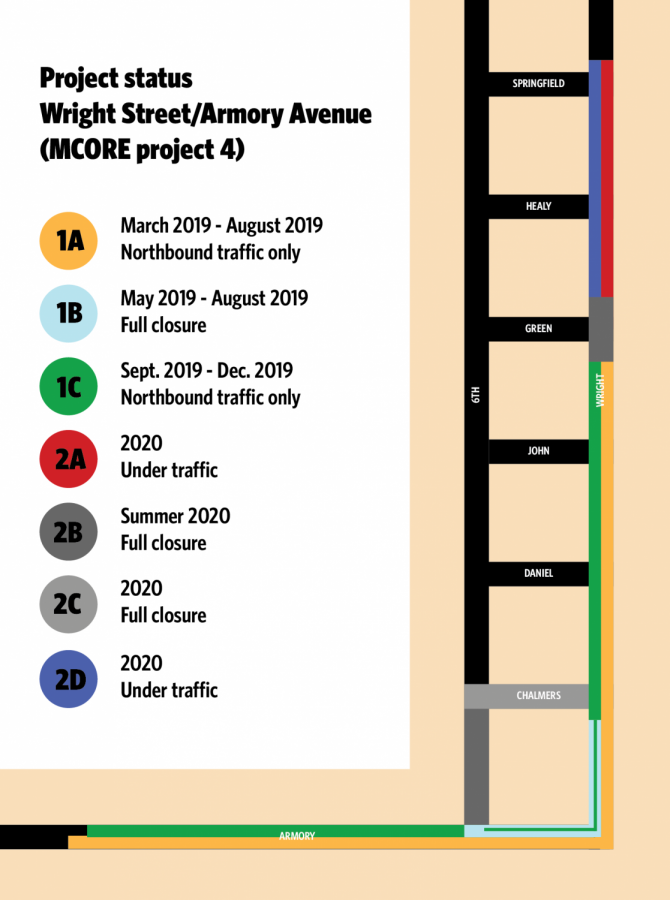 City agencies began unearthing Armory Avenue and Wright Street in early March. For the spring semester, here’s what students need to know: MCORE Project 4 is underway and its construction sites are here to stay.

The Multimodal Corridor Enhancement Project is a five-part upheaval and reconstruction of several vital Champaign-Urbana public transportation sites. MCORE aims to balance methods of transportation and reduce conflicts between buses, bikers and pedestrians.

MCORE rides off a $15.7 million Transportation Investment Generating Economic Recovery grant from the U.S. Department of Transportation, along with $31.2 million from the University, Mass Transit Department and the cities of Urbana and Champaign. Project 4 is the largest and costliest, resurfacing at an estimated $10 million.

Why the high bill? Not only are Wright Street and Armory Avenue transit hot spots in need of significant renovation, but construction workers are also replacing a 100-year-old water main underneath the intersection while the ground is unearthed.

Construction follows a tight schedule laid out in MCORE’s initial proposal. For MCORE to meet the 2021 deadline specified in the TIGER grant, some resurfacing had to occur during the semester. Student complaints derive from the lack of University communication about the construction.

Sarah Wheeler, sophomore in Business, is a member of Pi Beta Phi and lives in the chapter house on Wright Street. Members of the sorority felt blindsided seeing their typical class routes walled off without prior notification, Wheeler said.

“Since what’s blocked off changes every day, you never really know what to expect or what you’ll be able get through each day,” Wheeler said.

Likewise, some feel Project 4 cramps an already construction-laden campus. Sushobhan Sen is a graduate teaching assistant who spends much of his time in the Civil Engineering Building on the Engineering Quad. Sen deals with constant restroom renovations and a noisy Hydrosystems Lab modernization project next door that interrupts his classes.

The brunt of MCORE’s work is on the horizon. Project 4 will intensify this summer along the Armory Avenue  and Wright Street intersection. When students return in August, Wright Street construction will flip to the west side of the road, opening up the current blockage. In 2020, MCORE moves to Sixth and Daniel streets and Wright from Green Street to Springfield Avenue. Project 4 concludes in December 2020.

The final phase of MCORE begins in 2021, resurfacing Green from Busey Avenue to Race Street. Along with a city project on Springfield and Lincoln avenues this summer, Urbana will be busy with construction for the near future, said Assistant City Engineer of Urbana Craig Shonkwiler.

“All of these projects will improve the connectivity of Urbana to campus,” Shonkwiler said.

For the time being, students can view MTD reroutes online and subscribe for construction updates on the MCORE website, Koester said.

As a civil engineering doctoral candidate, Sen provides some perspective for the wait of construction projects.

“Ultimately everyone has to go through some inconvenience to get good things constructed. Putting up a tent takes no effort, but nobody wants to live in a tent,” Sen said.