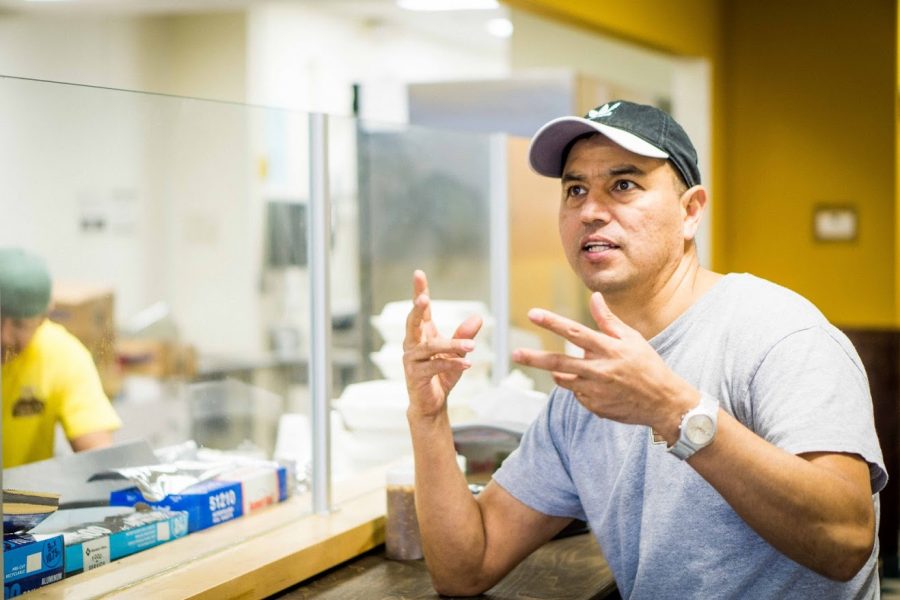 The owner of Fernando's, Eric Leoner, speaking at the restaurant located on Wright and Daniel. Eric says he strives for cheap, fresh, delicious, and authentic Mexican food on campus.

After two years of success, owner Eric Leonor decided to expand his food truck, Fernando’s, into a brick and mortar restaurant.

Leonor settled on the restaurant’s new location, next to KAM’s on Daniel Street, after talking about it with a friend and seeing an available lease in the building.

“We started a food truck two years ago. It was the goal for only the food truck, but we started doing successful business and we had the opportunity, and that’s why we’re here,” Leonor said. “It is a first experience for us moving into a building, so it’s kind of crazy, but we took the opportunity.”

He also assures customers the authenticity of the food truck has remained intact despite moving into the restaurant.

“The food served is the same as the food truck,” Leonor said. “It’s fast food, pretty much, but this is the most authentic flavor you can have anywhere around, I can tell you.”

Leonor pointed out that Fernando’s is keeping its options open. He also had some advice for potential customers.

“For people who haven’t tried authentic Mexican flavors, Fernando’s is the right place to go, and we would love to take care of them,” he said.

Despite having opened in late March, the restaurant has a happy customer base. Alex Montgomery, freshman in Business, had an enjoyable experience at Fernando’s.

“Ordering was cool, we actually were short on money for the order,” he said. “But he was cool about it; he just let us take the tacos and quesadilla.”

Montgomery said the food, as well as the ordering process, was of high quality.

“I had a quesadilla and it was pretty good,” Montgomery said. “He’s a nice guy, and he speaks Spanish if you only speak Spanish.”

“The food was quite enjoyable, and while I’m no aficionado of traditional Mexican food, the ingredients seemed of very high quality considering,” he said in an email.

Mclaughlin also pointed out the location of the restaurant has an advantage that most other Mexican joints cannot rival.

“The food definitely rivals that of Huaraches Moroleon in Urbana, and the proximity to campus makes Fernando’s all the better,” Mclaughlin said. “Considering the low offering of that style of food in the area, gotta say Fernando’s is a welcome addition.”