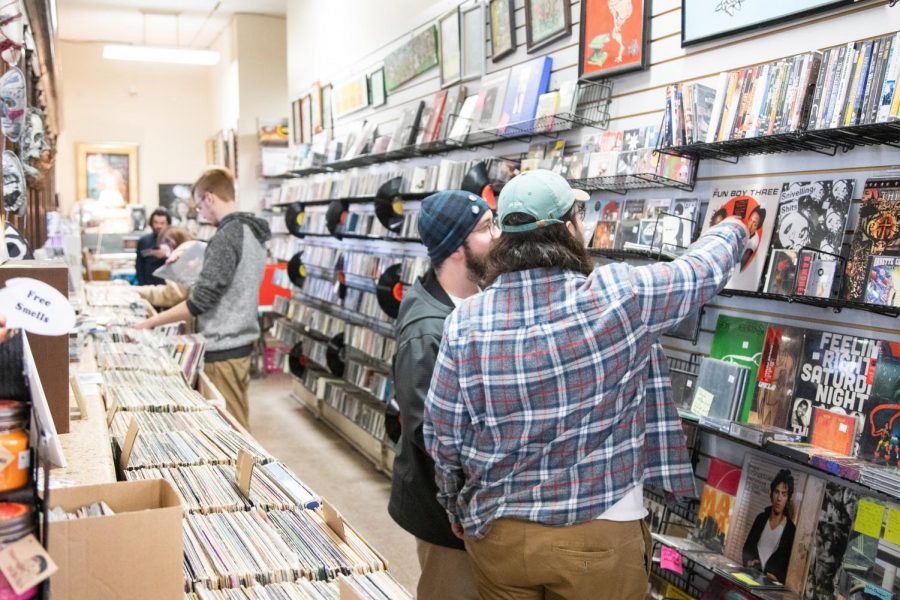 Patrons of Exile on Main shop for vinyl records for Record Store Day on Saturday. The holiday is celebrated on the third Saturday of April.

Nowadays, it is easy to stream music online and for free with just the click of a button. However, Exile on Main Street in Champaign is keeping the days of vinyl, tapes and CDs alive. On Saturday, Exile celebrated its 13th annual Record Store Day.

Record Store Day is an annual, national holiday that is celebrated every third Saturday of April, unless Easter falls on the same weekend.

Jeff Brandt, owner of Exile, opened the store in Champaign in 2004 and has worked with records since the early ‘90s.

Champaign-Urbana resident Tracy Popp said she has known Brandt for quite a while now, and she decided to attend Record Store Day this year in order to support him and his business.

“I wanted to support independent record stores, too,” she said.

Although Popp said she doesn’t come to Exile for Record Store Day every year, she was surprised at the crowd turnout this year and enjoyed seeing people in the store that she normally wouldn’t see.

“It’s a really great event and important to support local business, in particular record stores,” Popp said. “I’ve worked in record stores when I was a lot younger so I still think they’re pretty important as far as supplying music and providing a gathering space.”

With over 100 vinyls in his collection already, Noah Chisman, senior in FAA, said he did not know Saturday was Record Store Day but came with his friends to build his collection.

“It’s kind of like a dying medium … (but) clearly there’s people out here supporting it and keeping it alive, and there’s a reason people want to listen to vinyl still,” he said. “Yeah, there’s much better sound quality. There are things that won’t scratch, but there’s something about putting on an album and listening to it as a cohesive piece and having it play all the way through and having to flip it versus popping through a bunch of random playlists.”

Chisman said he also found the art around the store interesting and was not expecting to see other things like retro video games, for example.

Even though Record Store Day is only on one day during the year, Exile started its celebrations on the Friday leading up to it with indoor and outdoor performances. On Saturday, these performances continued.

As people walked in and out of the record store, there was always live music playing from either inside or right outside the record shop.

One of those performers, Anika Emily, who graduated from the University last May, performed mostly original songs from the inside stage.

Emily said she is friends with the talent booker for Exile. She asked to play on Record Store Day and then ended up on the lineup. She said she has been doing solo performances for about a year now and has always loved coming to Record Store Day at Exile over the past few years.

“It really brings the community together. There’s records for all different kinds of music, and everybody likes different kinds of music, but it’s one thing that can really solidify that sense of community,” Emily said. “We all like records, we all like listening to live music and there’s so many different varieties of bands and artists playing (on Saturday). It just gives a lot of people an opportunity to have their music heard and hang out and discover new music.”