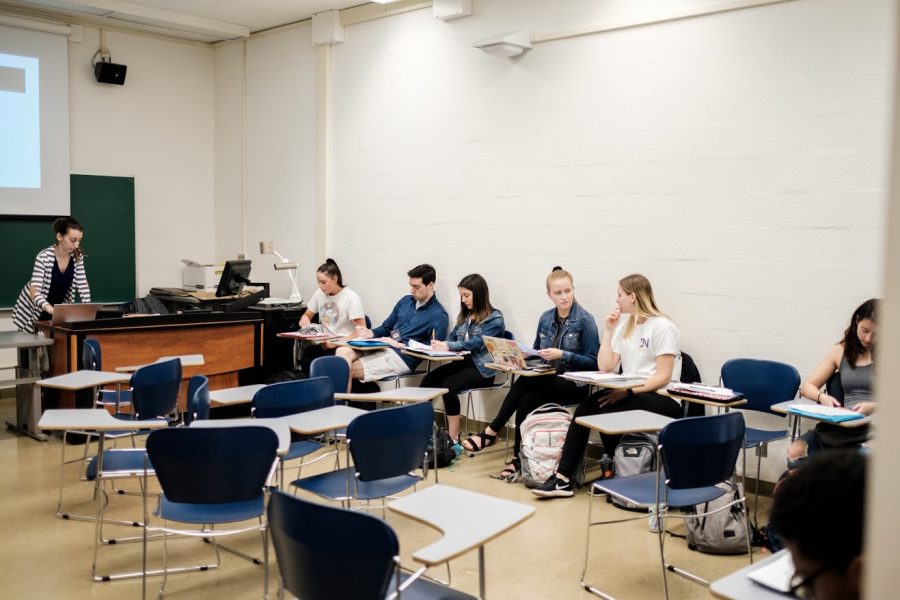 A section of SPAN 308: Spanish in the United States is held at the Foreign Languages Building on Apr. 16, 2019.

The number of students pursuing a degree in Spanish at the University is increasing, but the number of faculty is not, which may be a problem for the department.

As of February, the Spanish department has 137 majors and 352 minors with a total of 489 students in the department, not including people who have yet to declare their major or minor. This total is up 30 students from last year.

“In the U.S., the most commonly taught language to take is Spanish, so most of you guys come to the University choosing Spanish as your second language and to fulfill the language requirements,” said Ander Beristain, graduate teaching assistant in LAS.

Beristain said while the department has many sections of lower-level classes, the upper-level classes typically have fewer sections, with about 20 available spots for students. These students are typically majoring and minoring in Spanish and need the class to graduate.

Elena Maria Zannoni, senior in Business, said she was unable to get into an upper-level Spanish class for three semesters.

“I looked at everything,” Zannoni said. “When I was a sophomore in the spring, literally every single (section) was full, so that’s why I had to push it back. When I tried again over the summer for the fall, nothing was there either. That’s why it had to get pushed back so much.”

After taking almost two years off of Spanish, Zannoni said she was a little rusty going back to learning the language. However, she said studying abroad during her second semester of junior year helped re-familiarize her with the language.

“I was able to pick it up pretty easily after my entire semester in Spain, but I can’t imagine going into it blind like that,” Zannoni said. “If you don’t practice it, you lose it, and I’m sure if it’s so hard to get into that really deters students from continuing.”

Ane Icardo Isasa, graduate student and teaching assistant in LAS, is one of three TA’s for SPAN 303: Sounds of Spanish.

“I started teaching four years ago. When I started, the cap was 23 (students), and I had to override four more people because they had to take it and it was the only section available,” Icardo Isasa said. “You had to override people all the time.”

Icardo Isasa said other courses, such as SPAN 307: Bilingualism or SPAN 308: Spanish in the United States, get overrides often and have about 26 or 27 students.

Icardo Isasa said a lot of international students do not want to come to the United States anymore for various reasons, one of them being President Donald Trump.

After the 2016 election, international applications to the University decreased. However, they have slightly increased this year, said Mariselle Meléndez, head of the Spanish and Portuguese department.

The graduate TA’s for Spanish are all paid and supported financially by the department. The University also sponsors international graduate students for visas so they are able to study and teach in the Spanish and Portuguese department.

However, this can be an expensive and complicated process, said Melissa Bowles, associate head of the department.

“We will never accept a graduate student who we cannot support financially,” Meléndez said.

Meléndez said it is not that they do not want to hire more TA’s and add more classes, but the department does not decide the budget and must operate off of what is decided by LAS.

For 300-level classes and above, it is ideal professors instruct these, but when this is not possible, the opportunity is given to well-qualified, high-level graduate doctoral students.

Although the Spanish and Portuguese department would like to hire another linguistics professor and have applied for a grant for a faculty search with LAS, it is the college’s decision on whether or not the faculty search is granted, Bowles said.

Spanish classes can be limited in the number of students due to Facility Management Services and the size of the actual classroom, and the department does not like to give more than five overrides per class. However, the department will do its best to place students in desired classes, even if it requires opening up a new section occasionally.

“If students are having trouble getting into a class, they should let the department and our adviser (Tasha Marie Robles) know because we will try to accommodate them,” Bowles said.