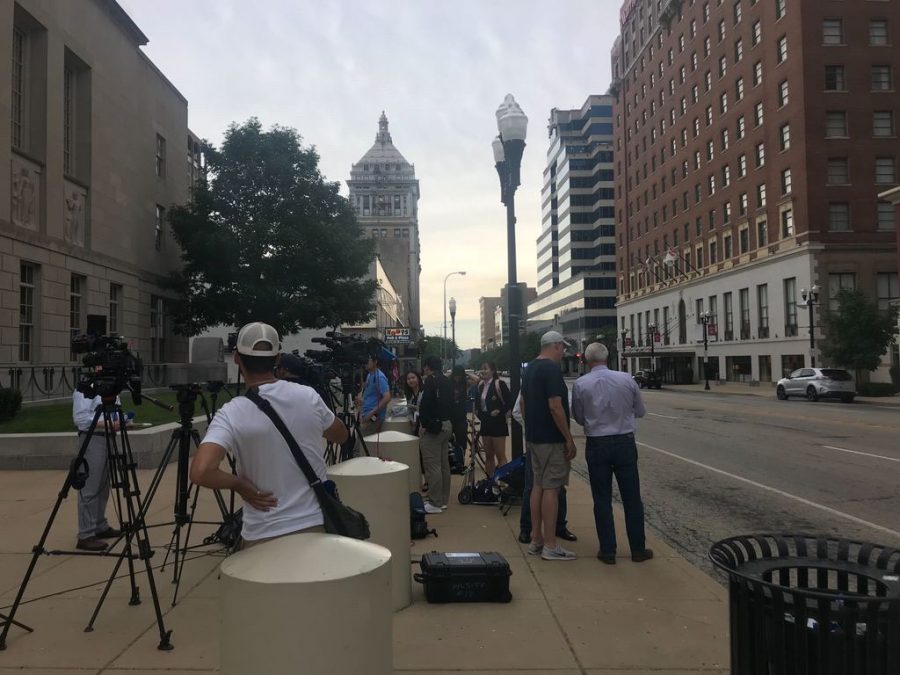 Members of different media outlets wait outside the courthouse in Peoria on Wednesday. The jury started deliberations around 1:30 p.m. to decide if Brendt Christensen should receive life in prison or a death sentence.

The closing statements in the case to find justice for Yingying Zhang were finished around 1:30 p.m. Wednesday. It’s been 767 days since her disappearance.

On Wednesday afternoon, the jury left the courtroom to begin deliberations on what the appropriate sentence should be for Zhang’s convicted kidnapper and killer, Brendt Christensen. The only two options the jurors have to decide between are life in prison without the possibility of parole and the death penalty.

Prosecutor James Nelson took the stand first at around 10 a.m. and went through and explained to the jury how he thinks the government has met its burden of proof. Defense attorney Elisabeth Pollock followed at around 11:30 a.m. in which she said the defense has been giving the jury the “full picture” of who Christensen is and was and why he deserves to live.

Christensen’s mother, Ellen Williams, and her husband, Kurt, as well as Brendt’s father, Michael, were present in court and sat four rows back on the right side of the courtroom.

Brendt, wearing a clean, white button-down shirt could sometimes be seen gazing into the gallery, seemingly to be looking at his family.

On the other side of the courtroom for a short while was Lifeng Ye, Yingying’s mother. However, Yingying’s father, Ronggao; brother, Zinyang; and fiance, Xiaolin Hou, were in the courtroom throughout the closing arguments. However, Ronggao did step out at one point, while Nelson was showing photos of evidence.

At one point during her closing argument, defense attorney Elisabeth Pollock even addressed the Zhang family.

“It is horrible what they’ve gone through,” she said, adding neither a death sentence nor a life sentence will repair what they’ve been through.

Christensen will die in prison no matter what, she said, but it’s the jury’s decision to decide whether that be at the end of his natural life or by a needle and drugs on a date chosen by the government.

She went on to explain the mitigating factors that should be considered, stating a mitigator is a reason to find for life.

However, Nelson said in his closing argument there is only one just sentence for this crime, and that justice should be death.

In Nelson’s statement he went over the government’s burden of proof and how he thinks each factor was met throughout the trial.

For the jury to consider the death penalty, two things must have initially been proven. First, the defendant was 18 at the time of the crime, and second, there was intentional cause of death — called the threshold intent factors.

However, the defense has brought up 49 mitigating factors, such as the mental illness and alcoholism history on both sides of Christensen’s family. The jury does not have to unanimously decide whether or not these were proven beyond a reasonable doubt, instead they will tally up how many of the jurors believe each factor exists.

It’s the jurors’ job to weight each of the factors presented by both sides and decide which ones have greater value. All members must unanimously agree to impose a life sentence or a death sentence.

The jury is currently in deliberation and will continue until this unanimous decision has been made. A time estimate of how long this would take is unable to be made. The Daily Illini will continue to update as more information is available.