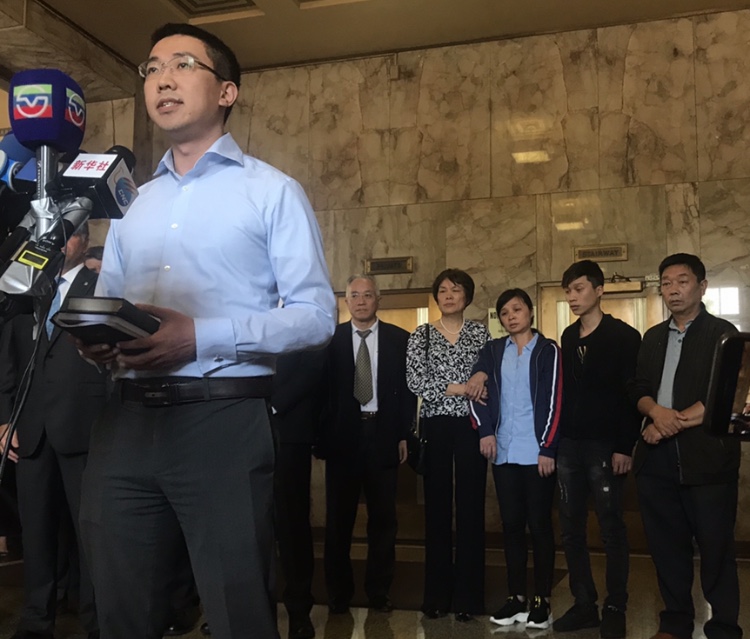 Xiaolin Hou, Yingying Zhang's fiancé gives a statement on Thursday. Zhang's family stands behind him as he says he won't ever agree with the jury's verdict. The jury was unable to reach a unanimous decision and therefore caused the court to impose a life sentence on Brendt Christensen.

At around 1:30 p.m. Thursday, the jury asked the court what would happen if a unanimous decision can’t be reached. At around 2:35 p.m., the court was informed a verdict had been reached.

After just over eight hours of deliberation, the jury was unable to reach a unanimous decision in what the sentencing of Brendt Christensen should be, causing the court to impose a life sentence without the possibility of release instead of the death penalty.

Christensen was convicted in late June of kidnapping and killing visiting scholar Yingying Zhang. She was last seen getting in his Saturn Astra in June 2017 and was never seen again. She is presumed dead, although her remains have never been found.

Both Zhang’s and Christensen’s families were present in the courtroom as the verdict was read.

As Judge James Shadid told the courtroom about the inability to reach a unanimous decision, Christensen’s head bowed in relief and sighs throughout the courtroom could be heard.

The sentence was imposed at 4 p.m. Thursday. Shadid said by law the court must impose this sentence and will impose a further sentence for Christensen’s other two counts of obstruction of the investigation that would have to be served consecutively. Additionally, he will be fined $250,000 for these counts, even though it may never be paid.

After the sentencing was official, a press conference took place in the courthouse. The Zhang family and Xiaolin Hou, Yingying’s boyfriend, were all present alongside prosecutors James Nelson and Eugene Miller.

Hou said the result today seems it will encourage people to commit crimes.

“The result today (seemed) to tell me that I can kill anyone, and I can kill anyone with all kinds of cruel matters, and I would not need to die for it,” Hou said. “And I better take some drugs and alcohol before I do it. I better act as a loner, and then people will not think I’m a dangerous person.”

However, before officially sentencing Christensen, Shadid asked both sides if they had any other statements to make. Steve Beckett spoke on behalf of the Zhang family, but he said they had nothing to present at this time.

The defense had nothing else to present either, which is when Shadid asked Christensen if he would like to make a statement to which he responded, “No, thank you.”

As Shadid went on to impose the sentence he first addressed the Zhang family.

“I hope there is some comfort for you,” Shadid said. He went on to praise the “heroes” that made this sentencing and trial possible, including the University police, FBI and Terra Bullis, Christensen’s ex-girlfriend who “spoiled the defendant’s goal of getting away with murder.”

He described these people as having much dignity and honor in helping with the initial investigation.

“Your lack of remorse was shown again today,” he said. “(Even) 769 days after taking away Yingying Zhang’s life, you cannot muster one ‘I’m sorry.’”

He described how Christensen will live a lonely life in federal prison and that “maybe — just maybe —(he’ll) pick up a pen and write ‘I’m sorry’ to Mr. and Mrs. Zhang.”

Some jury members sat in the gallery to watch the sentence be imposed as they were finally relieved of their duties. Court officially adjourned around 4:13 p.m.

John Milihiser, a United States attorney for the Central District of Illinois, made a statement on behalf of the Zhang family.

Jason Beckett and Zhidong Wang, who have been working with the Zhang family for the past two years, were present at the press conference after the sentencing, giving statements in both English and Chinese.

They thanked everyone involved in the investigation and prosecutors James Nelson and Eugene Miller for continuing to keep them informed so they could then continue to keep the Zhang family in the loop.

Ronggao Zhang, Yingying’s father also made a statement, which was translated by Wang. Hou gave his statement in English first, then in Chinese.

“The jury has spoken, and the trial is over, but Yingying is not home,” said the opening sentence of Ronggao’s statement. “Unless and until we are able to do that, we will not have peace or closure.”

He said even though he and his family do not agree with the jury’s decision, they accept Christensen will spend the rest of his life in prison, which will reflect their loss in a meaningful way.

“We hope that every day he spends in prison he feels the pain and suffering that we feel for the loss of Yingying,” he said.

Ronggao also thanked law enforcement and prosecutors in working to seek justice for Yingying as well as many other people, including anyone around the world who supported them during this time.

“Now that the trial is over and the jury has made its decision, we ask the defendant to unconditionally tell us what he knows about Yingying’s location,” he said. “If you have any humanity left in your soul, please help end our torment. Please let us bring Yingying home.”