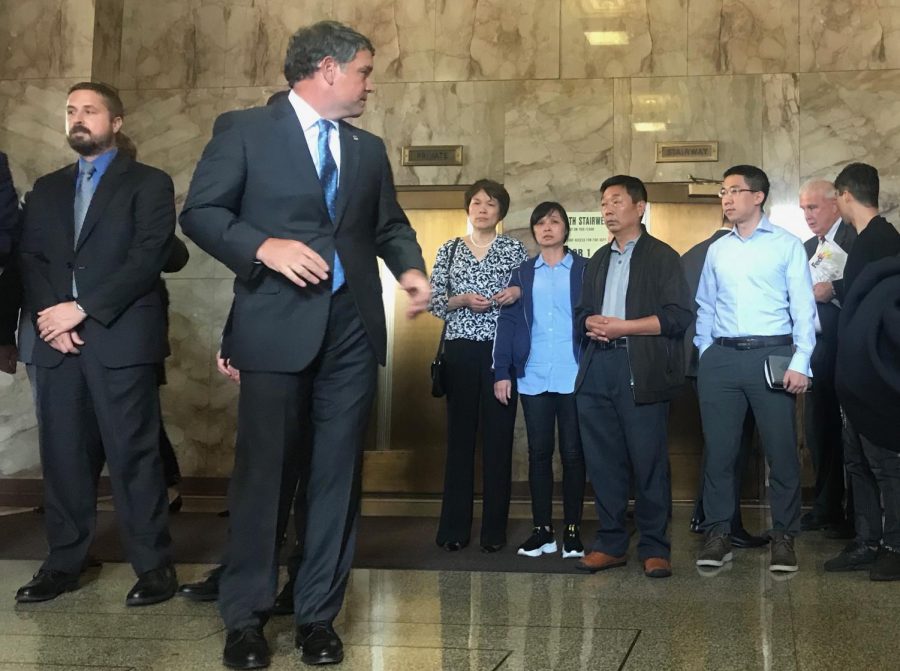 Yingying Zhang's family steps into the room after Brendt Christensen's sentence was imposed on July 18 around 4 p.m. Yingying's father, Ronggao, gave a statement on behalf of his family.

It has now been just over a week since the jury could not unanimously decide what the punishment of the kidnapper and killer of visiting scholar Yingying Zhang’s should be.

It’s a life or death decision not many people think about having to make in their lifetime. However, for 12 people this decision was on their minds for almost four weeks.

Brendt Christensen was found guilty toward the end of June, for kidnapping resulting in death by the same jury that could not unanimously decide if he should be sentenced to death or life in prison, ending their deliberations on a 10-2 vote for the death penalty, according to one of the alternate jurors from the trial, Bob, who did not wish to disclose his last name for the article but was willing to speak with The Daily Illini about his experience.

The jury consisted of 12 jurors and six alternates. The alternates did not participate in any of the deliberations or verdicts but were required to sit through the trial just in case one of them needed to step in. The alternates were also required to follow the same rules as the other jurors.

Every day, Bob would leave his house in Bloomington, Illinois, around 7 a.m. to get to the courthouse in Peoria by the latest 9 a.m. Before that, however, Bob had a job and canoeing trip in Canada to look forward to this summer.

“I immediately knew when I pulled it from the mailbox that (it was) a jury summons,” Bob said.

He informed his brother, who he had planned the trip with he may not be able to go on the trip, and he eventually found out that he was right. He officially canceled his trip to be an alternate juror for the case U.S. v. Christensen.

At the very beginning, when opening statements first began in the guilty or not guilty phase, Christensen’s attorneys said right away they would not deny his guilt in Zhang’s murder.

“From a jury’s perspective … isn’t that the whole reason we’re here: for us to hear the evidence and make that decision?” Bob said.

He said after the entire trial ended on July 18, prosecutors Eugene Miller and James Nelson as well as Judge James Shadid, spoke with the jury and answered any questions they may have had post the trial.

The admission of Christensen’s guilt by his attorneys was brought up to the prosecutors during this time, Bob said. They said they were supposed to expect anything but didn’t know what the defense would essentially come out with, so it was a surprise but wasn’t completely unexpected.

After Christensen was found guilty by the jury, the sentencing trial didn’t begin until about a week and half later, after the Fourth of July. This is when Bob was able to catch up on some work he might have missed, but he also got to go on his canoeing trip with his brother.

During the canoeing trip in Canada, there was no service and no electronics, so it was easy to stay away from any media coverage of the case, and he said his brother was good about not asking him about it as well.

“There we’re back in the bush. There is no communications. There is no electricity. There’s nothing,” he said. “It was a great way to destress and be out in the wild and go fishing and not think about or discuss the case.”

But eventually it was time to come back for the start of the sentencing phase. At the start of this phase each juror was asked if he or she had read, seen, heard or discussed anything about the case and every single juror had not.

Bob said as a jury, everyone was really good about paying close attention to all the evidence and to what was being said, adding the majority of the jurors also had some form of college education.

During the numerous and often emotional testimonies, Bob said there was discussion of possibly needing one of the alternate jurors to step in because one of the other sitting jurors had to leave the courtroom during a testimony from Zhang’s family. However, she was questioned by the judge and both sides of counsel and was cleared to stay on.

Bob said depending on who was on the witness stand at the time, there was often a swing of emotion.

“You would hear the testimony of Yingying’s parents and brother and boyfriend and friends, and that was extremely emotional,” he said. “Then you’d hear testimony of Brendt Christensen’s friends and family and I would say that was a little less emotional because he was the killer, but you’d have a shift (of emotion) then depending on who was talking at the time.”

He said his emotions did ebb and flow, but his position stayed pretty steady throughout the sentencing phase, and he is respectful of the decision the jury ended up with.

Although Bob did not wish to say if he would have voted for either death or life, he did say this: “If I could trade Brendt Christensen for Yingying, I would undoubtedly, immediately.”