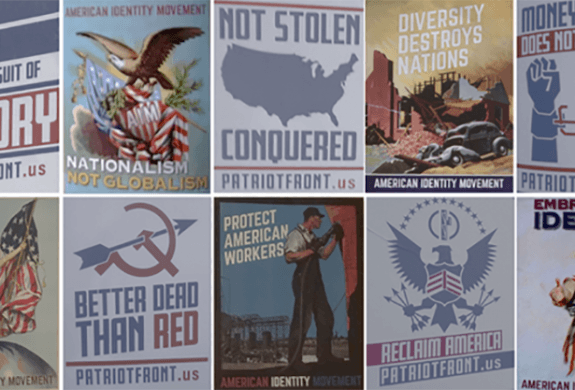 White supremacist propaganda like the above examples have been posted on Midwest college campuses. The coded, indirect nature of these messages are used to appeal to a larger audience for white supremacist groups to recruit new members, said Education Director at Anti-Defamation League Midwest Dr. Lara Trubowitz.

The ADL reported 36 cases of white supremacist propaganda on campuses across Illinois, Indiana, Minnesota, North Dakota, South Dakota and Wisconsin from Sept. 1, 2018 to May 31 of this year. Fifteen of these cases were reported on Illinois campuses.

Four instances of white supremacist propaganda such as posters and stickers were reported throughout Champaign and on the University campus in October, November and January, according to the ADL’s Hate, Extremism, Anti-Semitism, Terrorism Map.

Propaganda campaigns are an anonymous way for white supremacist groups to spread their messages across communities and recruit new members, according to the ADL report.

The white supremacist propaganda messages include, “To ourselves and our posterity,” “Keep America American,” “Not stolen conquered” and “European roots, American greatness.”

Dr. Lara Trubowitz, education director at the ADL Midwest, said the veiled and patriotic nature of these messages helps appeal to a larger audience who may not necessarily identify with more forthright white supremacist language and symbols.

“To mainstream or professionalize white supremacist movements, one of the things these organizations have started to do is to code and transform some of the messages, signs and symbols that they’ve traditionally used,” Trubowitz said.

The alt-right organizations Patriot Front and Identity Evropa were responsible for the reported cases of white supremacist propaganda found at the University. The ADL and the Southern Poverty Law Center both classify these organizations as hate groups.

Patriot Front broke off from another white supremacist hate group Vanguard America after the deadly “Unite the Right” rally in Charlottesville, Virginia, in 2017. Identity Evropa rebranded to the American Identity Movement in March after private chats among its members leaked.

Michael Johnson, sophomore in LAS, said he and his friend took down about 200 white supremacist stickers across campus in October.

The University’s Facilities and Services staff also removed about 60 stickers from campus signs and lampposts after administrators became aware of the incident, according to The News-Gazette.

“It has nothing to do with the content,” University spokesperson Robin Kaler told The News-Gazette at the time. “People have a First Amendment right. It doesn’t matter what it says; if it’s in a place where it doesn’t belong (it gets removed).”

Johnson also took down some stickers from a separate reported incident in January.

Some members of the Champaign-Urbana community became aware of the January incident after Patriot Front posted photos on Twitter of its fliers posted around town.

“These newer, tech-savvy groups attract young white men quite a bit more because they’re able to reach a wider audience,” Johnson said. “Some right-wing groups have rebranded themselves to be a higher class or an educated group rather than the street gang mentality of before.”

The mass shooting in El Paso on Friday, which left 22 people dead and more than two dozen wounded, is being investigated as a possible hate crime by Texas authorities after the gunman showed having white supremacist beliefs.

The gunman is believed to have published a “manifesto” online minutes before the shooting which included racist language aimed at immigrants and Latinos, according to authorities.

Nationwide, the ADL reported 313 documented cases of white supremacist propaganda on college campuses during the 2018-2019 school year — a 7% increase from the 292 cases reported from the previous year.

The data from the ADL report comes from its community partners and community organizations, news sources and various databases. The number of instances of white supremacist propaganda found in the report may be underreported, Trubowitz said.

University spokesperson Chris Harris told The Daily Illini in an emailed statement intolerance, racism and violence will never be condoned at the University:

“The First Amendment assures the right of free speech for all members of our community, but that right is not unlimited,” the statement said. “We can and we do condemn speech and action that are unprotected and in opposition to our values of fairness and equality. We adamantly reject the idea of racial supremacy and we take appropriate action when we learn of incidents that violate our policies here at Illinois.”

Trubowitz said she is concerned the coded nature of these white supremacist messages could potentially blindside some white students who may feel out of place on campus and want to identify with a community.

“These groups believe if they can go into an area and potentially attract what they consider more impressionable students, they’re going to lift up and energize the movement,” she said. “Campuses need to be able to train students to know what to look for, especially as the images, symbols (and) the iconography shifts.”

Trubowitz said another reason white supremacist groups target college campuses is because they are also an easy source of publicity since it sparks public outrage very quickly, which in turn means their fliers can more quickly get into the news.

Editor’s note: A previous version of this article stated the data from the ADL report comes from self-reports from white supremacist organizations, news sources and various databases. The Daily Illini regrets this error.