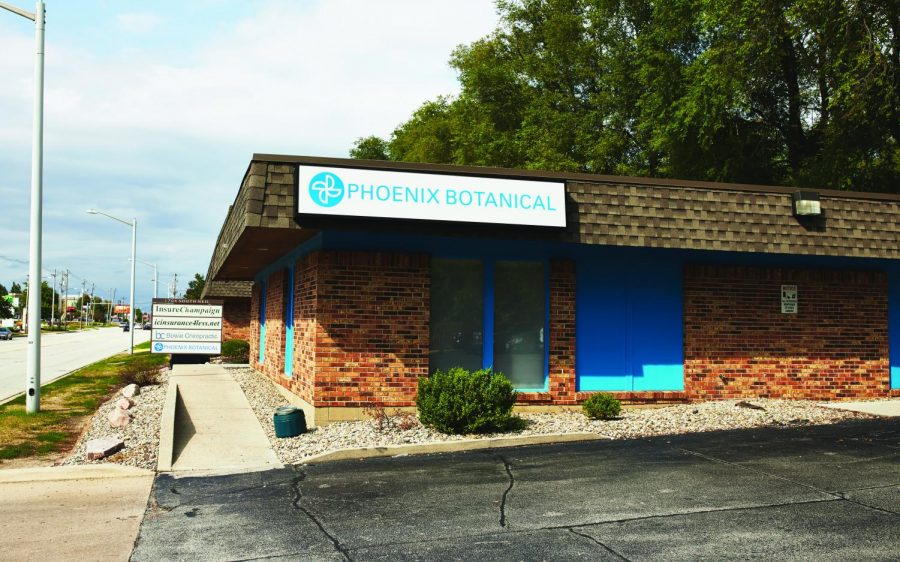 The front entrance to Phoenix Botanical, which stands at 1704 S. Neil St., a marijuana dispensary located in Champaign. House Bill 1438, passed in Illinois on May 31, states anyone 21 or older can possess, purchase and use limited amounts of cannabis starting Jan. 1, 2020.

Although University students still will not be allowed to possess marijuana on campus come Jan. 1, 2020, two medical marijuana dispensaries located in Champaign and Urbana plan to sell recreational marijuana by the same date.

House Bill 1438 passed in Illinois on May 31 and provides anyone age 21 or older can possess, purchase and use limited amounts of cannabis starting Jan. 1, 2020. The bill also calls for an expungement “of minor cannabis violations under specified circumstances.”

However, according to a Massmail sent by Chancellor Robert Jones on Aug. 20, possession of marijuana will still be prohibited, as the University complies with federal law.

For City of Urbana Mayor Diane Marlin, the passing of the state bill was no surprise. Once the state legalized medical usage, the adult-use cannabis side was almost inevitable, she said.

“Currently with the new state law, people who are operating a medical dispensary have first opportunity to get a license for the adult-use sales,” Marlin said.

For Urbana, that medical marijuana dispensary is NuMed, located on 105 E. University Ave. Marlin said NuMed plans to sell adult-use cannabis within the same facility when Jan. 1, 2020, rolls around.

NuMed dispensaries also exist in Peoria and Chicago. Keith McGinnis is responsible for managing all of these sites.

Somewhere around 110 people frequent the Urbana location on a daily basis, McGinnis said. Once the law goes into effect though, it’s anticipated this number will double.

“So what we will have to do is make sure that we’re able to handle at least double our current crowd, double the number of people that come in on a daily basis,” he said.

In order to do this, NuMed is looking to hire up to 15 more people, open more point of sale systems and hire full-time security.

“We really haven’t had any issues, crime or anything like that because of having a dispensary there, and we don’t foresee that happening in the future, either,” McGinnis  said.

As far as the pricing of adult-use cannabis will go, McGinnis said it’ll continue to fluctuate over time due to supply and demand.

“I truly believe it’ll level off at a time because I think, from a cultivation standpoint, that it would be able to meet the amount of supply that is needed,” he said. “It may be a little bumpy at first, but I know it will level off, and we’ll be able to expect it and know what to expect on a monthly basis.”

Additionally, adult-use cannabis in Urbana will most likely have a 3% municipal tax on it — the highest percentage cities in Illinois could go, Marlin said.

Within the first year of the legalization of recreational marijuana, Urbana expects about $5-$10 million in revenue.

Across town, Champaign Mayor Deborah Feinen said in an email she did not have enough information yet to be able to comment on the recreational marijuana discussion.

However, Jason Erke, chief communications officer and spokesperson for Cresco Labs, the owner of Phoenix Botanical in Champaign, said hopefully they will be ready to sell adult-use cannabis by Jan. 1, 2020.

“Because we’re an existing medical dispensary, we have first priorities to get an adult-use license to sell in January (2020),” Erke said. “So once we get local approval and file that application and we get approved by the state, we’ll make whatever changes are necessary to be able to accommodate customers, and we’ll be ready for operation hopefully by Jan.

While smoking and using cannabis in the privacy of people’s homes will be allowed, the idea of social consumption is still somewhat mysterious.

Smoking cannabis can be prohibited in parks and school grounds the same way tobacco can be, Marlin said. But whether there’ll will be certain spaces designed for cannabis-use, Marlin and the city are still unsure.

“I really do think we need to have a lot of education around this thing because I’m already discovering people are having a lot of misunderstandings about what this law actually allows,” Marlin said. “It’s not legal for (people) under 21. It’s not legal for people to grow cannabis on their property unless they have a medical marijuana card. You can’t just open up a shop and sell product with cannabis in it. So, (there are) a lot of misconceptions, so we gotta do some education, too.”