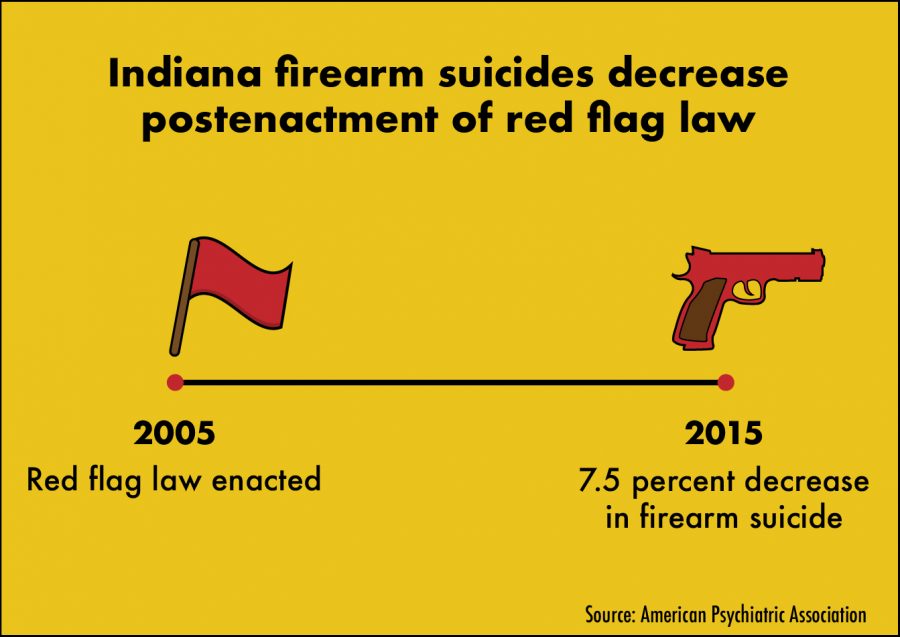 Since the enactment of the Firearms Restraining Order Act in January, Urbana police have not enforced it, according to officials.

Nicholas Grossman, professor in LAS, said red flag laws allow people to prove to a judge that, if someone is a danger to themselves or others, the court can issue an order restricting or confiscating an individual’s firearms.

Unlike many issues involving gun control, red flag laws often have bipartisan support, according to Grossman.

He wrote an article following the recent Dayton, Ohio and El Paso, Texas shootings encouraging policymakers to utilize red flag laws, as both states do not have any form of ERPOs.

In the incident of the Dayton shooting, Grossman explained the shooter had several warning signs, including the shooter stating he was afraid of what he might do. These concerns could have been brought to the courtroom and, ultimately, prevented the tragedy.

“(The events leading to the shooting) was an example where not only would people potentially bring him to a judge but where he might have even been okay with it,” Grossman said.

Besides a threat to others, though, Grossman said deaths through gun use are more likely due to personal threat or suicide.

Diane Zell, president of the National Alliance on Mental Health Illness in Champaign, said often, family members have no idea what to do when their loved one becomes mentally ill.

“It gives a tool for roommates, for family members, for concerned friends to help in a way that they couldn’t previously,” Zell said.

Zell explained while an individual is waiting to get access to treatment, which is not always an easy or quick process, personal harm is a threat. She said with the proliferation of guns in our society, individuals have easy access to guns, making it very dangerous.

Grossman explained the idea is if someone is showing suicidal tendencies, the law should confiscate firearms for varying periods of time, depending on the case. If the individual still attempts to harm themselves, they could try; but it would be harder than using a gun.

According to the NAMI website, one in five adults suffer from mental illness in a given year.  Zell said that is no different for Champaign-Urbana.

“(Red flag laws) pretty much a guarantee that a gun is going to work if somebody puts it in the right place,” Grossman said.

Since Indiana enacted their form of red flag laws in 2005, they saw a 7.5% decrease in suicide rates since enacted in the 10 years that followed.

Patrick Wade, communications director for University police, said firearms are strictly prohibited on campus and, to his knowledge, the University has not had any incidents where the Firearms Restraining Order Act has been invoked.

David Smysor, detective for the Urbana Police Department, said law enforcement does not legally have to be involved, although in a practical sense, would be involved at some point in the process.

He explained in an email a family member or friend can go directly to the courthouse and petition the court to issue a Firearms Restraining Order upon the individual, without technically going through any police force.

“This act is really intended for how law enforcement and family members can remove firearms from people who present a clear and present danger to themselves or others,” Smysor said.