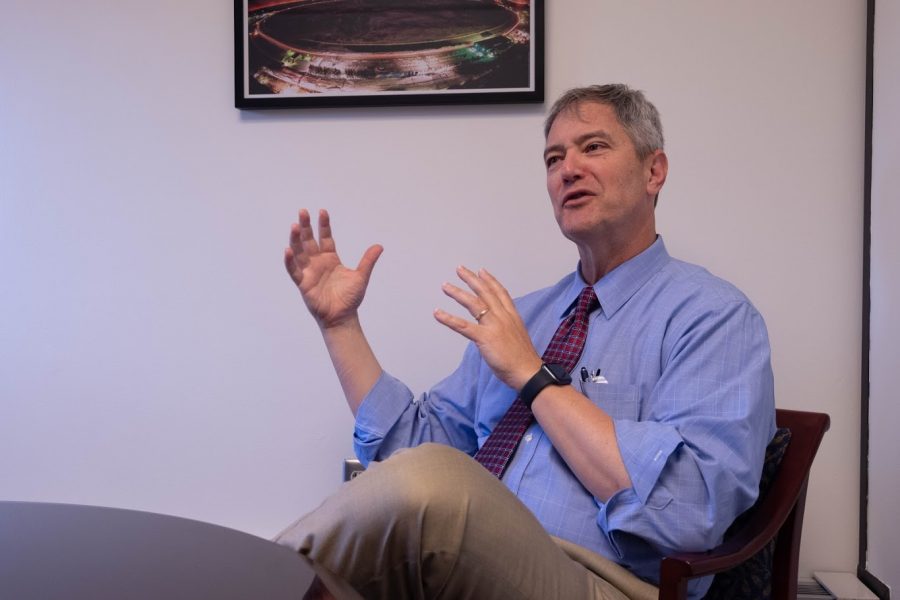 Kevin Pitts, Vice Provost for Undergraduate Education at the Office of Provost speaking at the Swanlund Administrative Building on Sep. 13.

The Department of Education rejected 99% of applicants for its Temporary Expanded Public Service Loan Forgiveness program within a year of its renovation.

In May 2018, Congress expanded the program to assist those struggling to secure loan forgiveness from the original Public Service Loan Forgiveness created to forgive federal loans for graduates who have worked at least 10 years full-time in certain public service organizations.

The expanded student loan forgiveness program was designed to help those ineligible for the original PSLF program; however, progress has been reported unsuccessful.

Of the 53,523 applicants, who applied to the expanded program from May 2018 to May 2019, only 661 were accepted as eligible for a program designed to expand its loan forgiveness to more public service workers.

As a part of the expansion, Congress appropriated $700 million for TEPSLF. However, only 4%, approximately $26.9 million, has been exhausted.

“In spirit, these are a good idea because the students are benefiting from the potential loan forgiveness and then the government or the educational system is benefiting from their contribution,” Pitts said. “I think the execution is an issue for sure, and that was one of the things this program clearly had a problem with; 99% of the folks being rejected execution was a problem.”

One of the core criticisms of the redesigned program was its confusing and unclear application process. Regardless of eligibility, borrowers are required to have applied to the original PSLF in addition to the expanded student loan forgiveness program in order to even be considered.

According to a report from the Government Accountability Office, 71% of the denied borrowers were rejected because they did not submit a PSLF application.

“That’s just maddening and also sounded like in this case, they did a very bad job of making people potentially eligible, making them aware,” Pitts said. “On the other hand, if they were going to get rejected anyway I’m not sure which is worse. But the other thing I would definitely say is that making folks aware of these programs, in general, is often a challenge and I think we (at the University) try to make students aware of opportunities like this, but it’s not easy, admittedly.”

Discussion of this particular program has not been actively held at the University, Pitts said the more immediate issue of how much money the University provides for students based on merit and financial needs are the primary discussion on campus.

“What we really hear about on campus is what are we doing for students right now,” Pitts Said. “And I think that’s exactly the right thing to think about because student bills are coming out in September and the first payments due later this month, that kind of thing. So how much money am I getting from whatever source, if it’s a scholarship or if it’s a grant or it’s a loan, that kind of thing is what’s on people’s mind.”

Discussion of financial support on campus has been directed toward ensuring student success and how universities can maximize the chance every student has to succeed not only academically, but also in life after college.

“It’s very interesting, and I think it’s very healthy that there are these conversations happening, and they’re not just here at the University of Illinois, they’re happening everywhere,” Pitts said. “It’s also putting pressure on colleges to keep costs under control.”

While the University’s financial aid department does not provide specific programs like TEPSLF, Michelle Trame, director of Student Financial Aid, said she believes students are provided with all information on their loan repayment options to the point they are ready to go into repayment. Trame advises students to pay close attention to college finances.

Aware of the issues regarding the cost of higher education, Pitts said the University is working to find sources of money to help increase the amount of financial support.

“We’re doing a lot, but there’s definitely more to be done,” Pitts said. “We don’t want costs to be the limiting factor in that. That’s really the bottom line.”

The Department of Education was unavailable for comment in time for the publication of this article.