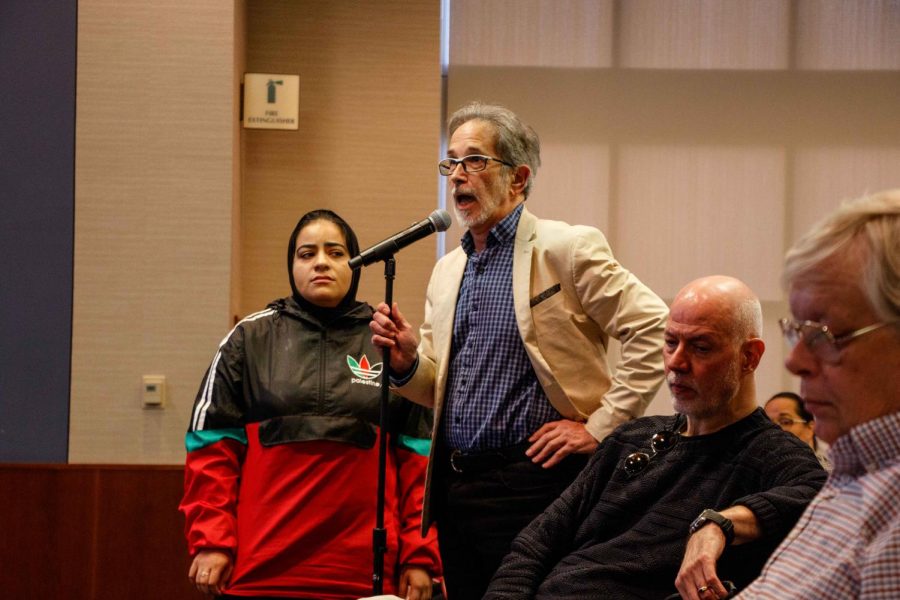 Bruce Rosenstock, professor in Religion, voices his disagreements to Chancellor Jones (not pictured) over his Massmail adressing anti-Semitism.

The most recent senate meeting was combined with the annual meeting with faculty in an effort to foster more dialogue. Monday’s meeting brought major conversation of anti-Semitism, swastikas and a presentation made by a student.

At 3:10 p.m., the senate was able to pass a few resolutions, ending about an hour later.

Following the senate meeting, University of Illinois System President Timothy Killeen spoke for about 25 minutes, mentioning the record diversity at the University, the annual fundraising report and other aspects of the three campuses he is proud of.

Chancellor Robert Jones was expected to speak next. However, instead of having a speech prepared, like Killeen, he opened the discussion right away to attendees of the meeting to speak about his recent Massmail denouncing anti-Semitism.

Bruce Rosenstock, professor in LAS, teaches classes within the Department of Religion, including Jewish Culture and Society.

In his statement to Jones, Rosenstock said the presentation that Jones mentioned in his Massmail sent out on Oct. 6 was wrongfully labeled as anti-Semitic.

Rosenstock said the student who gave the presentation is a student of his and is an American-Palestinian, who was criticizing Israel. The student, who is also a multicultural advocate, in no way, has ever shown any signs of anti-Semitism, he added.

In response, Jones said the complaint was not about the student, but about the presentation. He said the multicultural advocate presented her lived experiences to others and someone who was listening was “so moved they decided to repeat it without appropriate context.”

He said unlike other countries, the United States nor Illinois has made a law defining what anti-Semitism is. Rosenstock wanted Jones to clear this up from the Massmail. In response, Jones confirmed that his Massmail was not “redefining what constitutes as anti-Semitism.”

Rosenstock then wanted to know if the aforementioned presentation had not happened, would Jones have still sent out a Massmail denouncing anti-Semitism.

“I had to include it,” Jones said. “Because if I hadn’t, we’d be sitting here today discussing why I hadn’t sent it.”

Dunia Ghanimah, senior in LAS, addressed the Chancellor while he was taking comments from students.

She spoke mostly of the concept of martyrdom and continued speaking through tears about her 14-year-old cousin who died because of the Israeli-Palestinian conflict.

However, by around 5:10 p.m., having taken only the two comments from Rosenstock and Ghanimah, time was up for the annual faculty meeting. While one other student tried to speak through the closing statements, the meeting officially ended around 5:30 p.m.