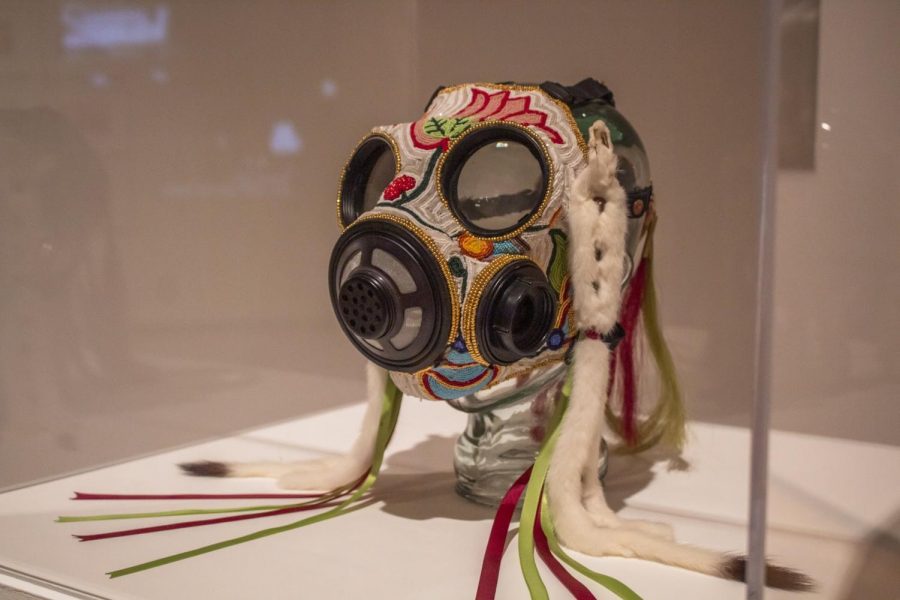 Installation by Naomi Bebo in Hot Spots: Radioactivity and the Landscape at Krannert Art Museum on Tuesday. The exhibit highlights the damage imposed on indigenous lands by the nuclear power industry.

The Krannert Art Museum opened the “Hot Spots: Radioactivity and the Landscape” exhibit on Thursday, taking on the role of bringing attention to the damage done by the nuclear industry on indigenous lands and posing questions of long-term plans for the future.

First seen at the University at Buffalo, the exhibit was created for the purpose of highlighting the production, use and disposal of radioactive materials through varying artists and pieces.

Having this exhibit make its way to campus is relevant in its own way. Illinois produces one-tenth of all nuclear-powered electricity in the United States and has the most nuclear plants on a national level. However, the University can stand as an outlier to these statistics, basing most of its energy on fossil fuels.

Kathryn Huff, professor in Engineering, said the University uses an embedded grid, creating 82% of the campus energy from fossil fuels rather than nuclear power.

“The University of Illinois doesn’t rely at all on nuclear power unless we hit those peak times in the middle of July in the afternoon between 2 p.m. and 6 p.m.,” Huff said. “Then, we buy electricity off the grid, and interestingly, that’s a really carbon intensive moment.”

Jennie Lamensdorf, co-curator of the exhibition, said this show is all about how radioactive material impacts landscapes one way or another.

“There are three things I want people to take away from this show,” Lamensdorf said. “The first is that this is a story that impacts everyone globally, but definitely all Americans, and that is because this material has found its way into all 50 states. The second is that the United States and the world has no plan for how to deal with radioactive waste. The third thing is that this story, like all stories, is all about money, who has it, who wants it and who has power.”

Given the proposed lessons of the exhibit, the art pieces also allow for personal reflection.

For example, a description of a beaded gas mask by Naomi Bebo states it is meant to be a juxtaposition of beauty and war. While being a symbol of cultural identity of native tribes, it also aims to remind people if change doesn’t come soon, gas masks will become accessories to outfits.

Another piece is a project by Michael Brill, which revolved around designing an artistic language that will stand for thousands of years to warn future generations to keep out of areas in which radioactive waste is buried.

“How do you mark a site to know that it’s dangerous?” Lamensdorf said. “That’s where the Michael Brill project comes from.”

Other pieces include maps of uranium use over the past 100 years, maps of nuclear power plants in the United States and photographs depicting nuclear catastrophes, such as the Church Rock Mill spill in New Mexico where over 1,000 tons of solid waste infected the Rio Puerco.

The curators of the exhibit had to find appropriate spatial relations between these art pieces, creating an overall logical and continuous story. Lilah Leopold, co-curator of the exhibit, intern for the museum and doctoral student in FAA, participated in designing the exhibit in such a way that it would benefit the art.

“I’ve been drawn to study art history because a lot of artwork, especially this in the show, are also great starting points to talk about things,” Leopold said. “They can express conflicting things at one time, with sound or with color.”

The curators of the exhibition mean to question future plans of the nuclear industry. This can arise multiple perspectives. Huff explains the nuclear industry today is at a place with strict regulations and no-risk policies. She believes in a cleaner future on campus with more use of nuclear power.

“It’s important to handle nuclear-spent fuel extremely safely, much like we would handle any toxins,” Huff said. “We keep our spent fuel. We keep it secure in large dry casks. Some of it is in spent fuel pools, waiting to be placed into casks. Generally speaking, it’s solid, and we keep track of it, and we are not letting it into the air.”

“Naturally occurring uranium in this country and others happens to occur in places that are inhabited by very disenfranchised people,” Lamensdorf said.

Without safety regulations, this led to detrimental health and environmental consequences on native land. However, today’s nuclear engineers and scientists focus on finding ways to reduce the lifespan of waste, incorporate recycling of waste into more countries and abide by strict regulations that provide for the safety of people.

“There can be many different opposing sides in the equation of an artwork, especially at a time where we get very polarized,” Leopold said.

Correction: A previous version of this article credits, in the photo caption, Will Wilson as the artist of the piece. The artist is Naomi Bebo. The Daily Illini regrets this error.