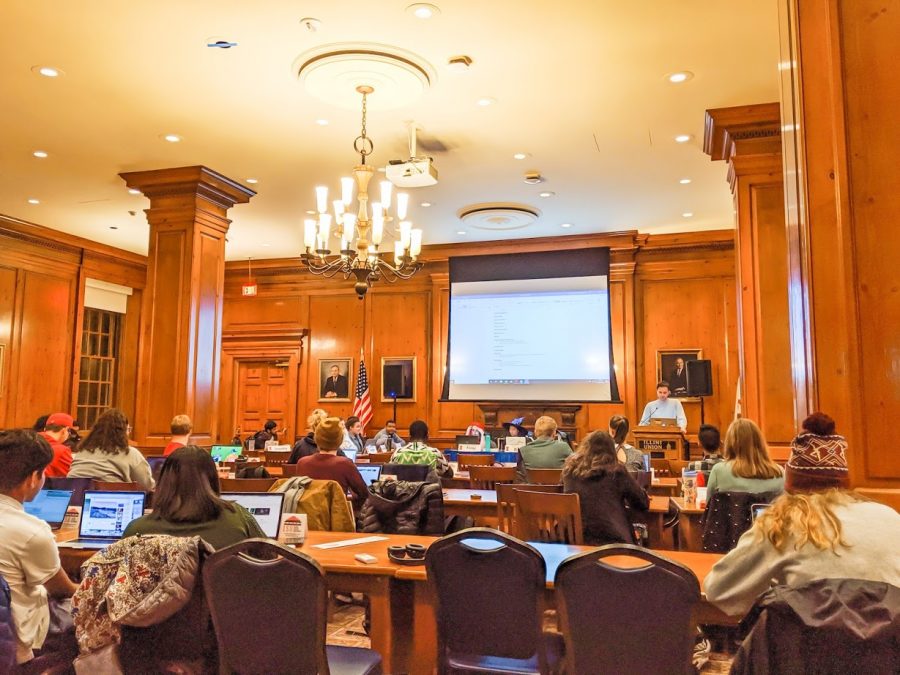 Illinois Student Government meets at the Illini Union on Oct. 30.

At the most recent Illinois Student Government’s weekly meeting, held every Wednesday at 7 p.m., various projects currently being worked on were said to be in motion.

One of the first topics covered during the meeting regarded the resources listed on the back of University i-cards. Although the list includes phone numbers for SafeRides and SafeWalks, around 75% of students are unaware of this information, said Alyssa Xiao, speaker of the senate and junior in LAS.

“I saw the back of my friend’s … Santa Barbara equivalent of an i-card, and they had about six phone numbers on there for resources, and I thought, why can’t we have all of them as well?” Xiao said.

Xiao has been in the process of communicating with administration about including more resources on the i-card, such as a mental health crisis hotline and a rape crisis awareness center phone number. Currently, she is working to gather data on i-card resource use and is talking to administration to find the most efficient way to relay these resources to students.

Members also talked about updates on the Menstrual Hygiene Pilot Program, which is projected to expand its resources into the Engineering Quad and buildings not maintained by Facilities & Services such as the Illini Union, McKinley Health Center and University Housing. The program was implemented earlier this semester and currently provides free menstrual products in Lincoln Hall, English Building and Gregory Hall bathrooms.

“Since this will not be completed in one year, we are considering creating a task force in order to do this, so you can expect a resolution for that later in the month,” said Susan Zhou, speaker pro-tempore and senior in LAS.

Ameren Corporation, a power and energy company, has a former manufactured gas plant at Fifth and Hill Street. A resolution was brought up concerning the Fifth and Hill community. Due to Ameren’s recent pollution activity near the community, there have been drastic health risks posed in the area.

“Ameren has agreed to clean up their property, but because the chemicals have (sunk) into the groundwater and travels around the community, the thousands around Ameren’s property have been highly affected by this,” said Bugra Sahin, chair of the Committee on Environmental Sustainability and senior in Engineering.

Residents who live at Fifth and Hill are primarily people of color who are considered to be economically poor. The Ameren plans have been shut down, but there are still high levels of benzene and other toxic compounds circulating in the environment, Sahin said.

Sahin read a statement written by Senator Chris Ackerman-Avila, which requests a certain resolution for this situation.

“In collaboration with the Black Students for Revolution and Students for Environmental Concerns, I would like to present this resolution that calls for partnership with ISG in an upcoming teaching regarding the classical case of environmental racism,” the statement reads.

The main goal is to raise awareness on the issue and bring people together to support individuals in these communities. The Black Students for Revolution hopes students will attend the informational sessions and rally for support if possible.

Since the Illinois Student Government is still relatively new to the University, many students are unaware of its role at the University and what the organization is built upon. To encourage students to take part in the ISG opportunities and resolutions more often, a potential “ISG Day on the Quad” has been discussed.

This potential event was proposed to allow students to interact with members of the organization and learn more about the student government representing them.

Each branch of government would have a booth, and for each specific senate, there would be a booth for every committee. The booths will inform students of the different branches’ duties and talk about how it helps the student body as a whole. Students who are interested will also be directed to the main committee members if they want to contact them in the future.

Editor’s Note: A previous version of this article misnamed the Students for Environmental Concerns organization. The Daily Illini regrets this error.