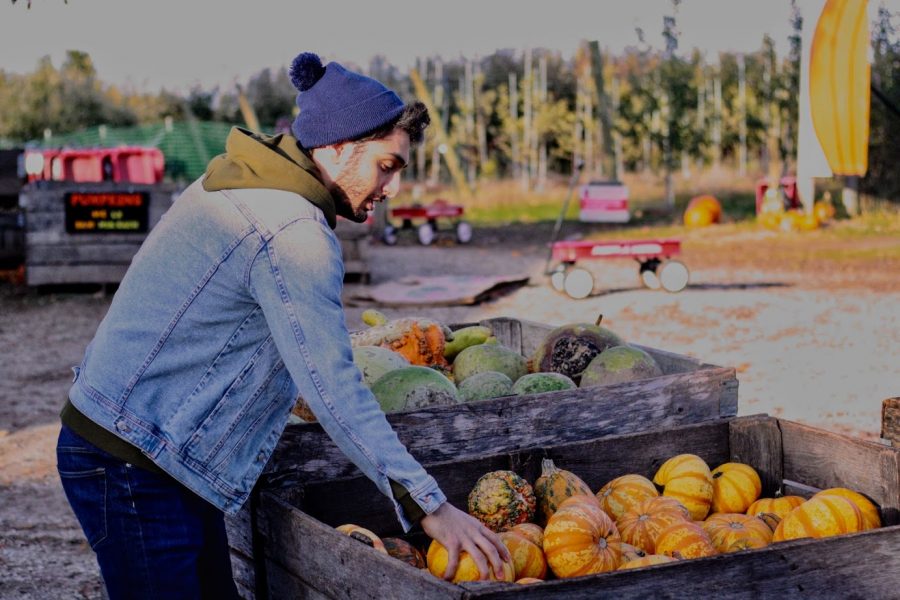 A patron of Curtis Orchard picks a pumpkin out of a bin on Friday. Curtis Orchard opens on July 20 every year, but crowds usually gather around October when the fall season sets in.

Jessalyn Flores, vice president of programming from the Illini Union Board, said in an email some events the board has already conducted for the fall include September and October Illinites, Party on the Main Quad and Art Gallery openings.

Flores said all of the Board’s planning is for the fall and spring semesters on campus.

“The events that we plan can happen for either semester, but if there is a certain theme that they are trying to convey when it comes to a holiday or season in the air, they try and match that, but other than that, both semesters are equal when it comes to planning,” Flores said.

Flores said the only minor downside for event planning in the fall is the weather.

“If we want to plan outside, we have to really check the weather and hope and make sure that it is not going to rain or be too cold, but really that happens in both semesters, but that is such a minor, minor downside,” Flores said.

However, Flores said she’s still a fan of the fall season.

Isabel Garcia, president of October Lovers, said the organization kicked off its October-loving with a bonfire, along with a visit to Curtis Orchard, a haunted house, corn maze and a barn dance.

Rachel Coventry, manager at Curtis Orchard, said the orchard, which officially opens on July 20 each year, gains most of its popularity toward the end of August and October because of student attendance.

Though it varies greatly, Coventry said a lot of RSOs, fraternities, sororities and small groups of students come out to enjoy the orchard around this time of year.

“Without the fall we would cease to continue to operate, (it) would be very difficult (because) we’re only a seasonal business, so we certainly rely on good weather, but we’re weather-dependent, year-round,” she said. “If we don’t have much of a crop that can produce greatly or we don’t have weather to come out and enjoy the orchard that also hurts us, so it’s an interesting business to be in when you’re so dependent on the weather.”

Coventry said frost and wet weather can affect the orchard. She also said because of a cold snap that took place last week, the pumpkins in the field are “done for the season,” and sometimes an earlier frost can do the same.

A Fall Weather Safety presentation created in 2019 by the National Weather Service instructed citizens to prepare for the winter weather with measures including ensuring trees are trimmed and at a safe distance from power lines, having an emergency kit, driving slowly with extra space between cars, if necessary, but avoiding driving in general, if possible.

Coventry said there are definitely disadvantages to operating a business in the fall for the orchard.

“The risk involved is (you only) have a couple of short months to try and earn enough to support business and to have enough staff to hire, and it’s a short season in order to get everybody trained, let alone hiring,” Coventry said. “And we don’t have a large overhead like some corporations might, and we’re all privately owned, so yeah, it’s a challenging operation to run.”