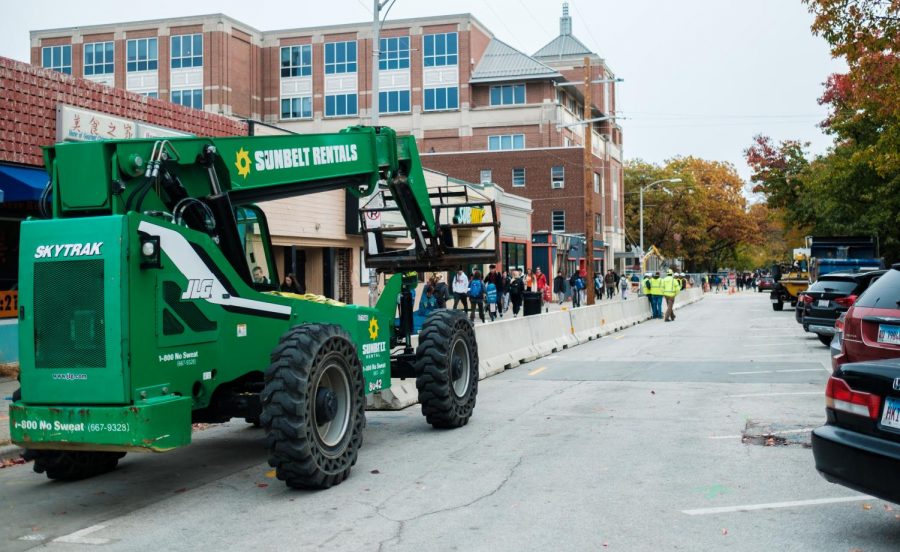 A Skytrak vehicle sits on the corner of Sixth and Daniel streets in preparation for the start of construction on Monday. The site will eventually be home to a new high-rise.

A new construction project began Monday, northeast of the intersection of Daniel and Sixth streets. Core Spaces, a private developer, is building an apartment, office and retail complex in this location.

The first two floors will be retail floors.

Stacey DeLorenzo, planning and review coordinator for Illinois Facilities & Services, said she has heard a couple of businesses that have previously occupied the property are interested in coming back. She said Espresso Royale and possibly Subway have expressed interest, though she added it is all speculation and rumors.

Floors three to five will be office spaces for the University while floors six through 13 will be apartments.

There will be long term closures and route adjustments due to this construction.

Parking lot C3 has been closed since early October and will remain closed until August 2021, except for authorized vehicles.

DeLorenzo said lot C3 will come back, but 18 spaces will be taken out, decreasing the size of the lot.

The sidewalk on the east side of Sixth Street between John and Daniel streets will be closed through August 2021. Parking meters along this section will be bagged and will prohibit parking. Vehicle traffic on Sixth Street will remain one-way southbound.

“It’ll be a tight squeeze,” DeLorenzo said. “Massive deliveries (to the construction sight) are expected, so that will have to be figured out.”