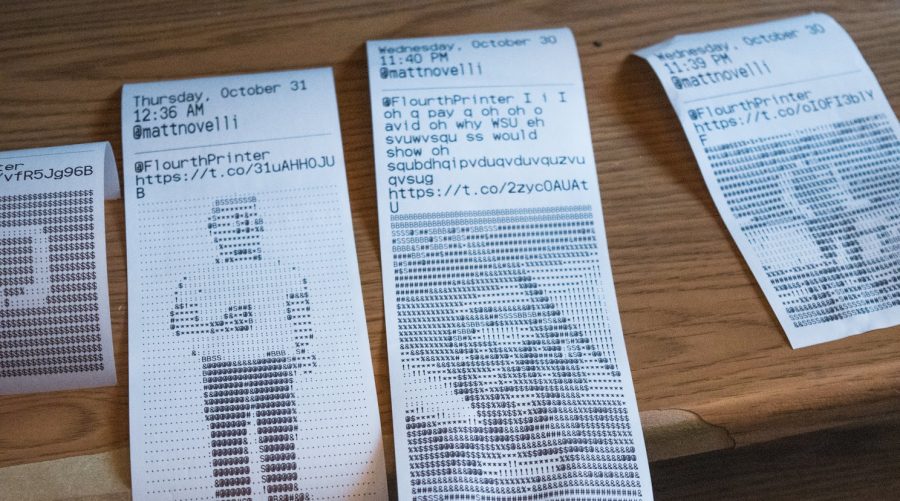 Printed tweets with messages and distinct script images made with a printer connected to Twitter in a dorm room at Carr Hall on Oct. 31. Two University students created this printer out of curiosity and desire for a challenge.

Two students living in Carr Hall in the Pennsylvania Avenue Residence Halls created a thermal Twitter-connected printer that uses coding to print tweets in their dorm. The printer is connected to a Twitter account under the username of @FlourthPrinter. It scans each Tweet that mentions the username and prints out the Tweet in seconds.

Roommates Adam Urish, freshman in Engineering, and Matthew Novelli, freshman in DGS, took about two weeks to finish making the printer. The two decided to start this project purely out of curiosity and temptation for a challenge.

The process started when Novelli ordered a receipt printer on eBay and thought about using his previous Twitter coding knowledge and connecting it to the printer. Urish joined him in completing the process.

Urish said Novelli had previously skipped class to work on the printer and often stayed up late to work on it as well.

The coding behind the printer was a long and sometimes frustrating process. Willard Sullivan, freshman in Engineering, lives on the same floor as Urish and Novelli and had insight on the students’ progress with the printer.

“I mean, when they made a mistake, they were clearly frustrated, but there was a sense of excitement and enjoyment behind it,” Sullivan said.

Vance Ursiny, freshman in LAS, also lives on the same floor as the creators.

“It went in stages of solving problems and then getting the pictures to eventually work,” Ursiny said.

The printer is also able to print pictures added to tweets by transforming them into symbols. Novelli explained the printer transforms the pictures based on light space or dark space.

For Novelli, he explained, this was one of the biggest projects he has done with coding. Urish, on the other hand, has been coding for six years and has worked on projects of this magnitude in the past.

The students explained most of the people on their floor know about the printer and use it to print funny tweets. However, they want to bring more attention to it.

“I want to show it at (the) Engineering Open House; we might do that. Maybe (we will be) putting signs up in more places, like the (Illini) Union or around campus, to get more people to Tweet at it,” Urish said.

Urish and Novelli said they are curious about connecting the printer to a different social media platforms in the future. Through successfully finishing this project, the students also created a bond between each other.

“They’re an interesting combo,” Sullivan said. “From what I’ve heard, they didn’t know each other; they just met each other in the dorm room, and that’s pretty cool because it looks like they have a great friendship.”