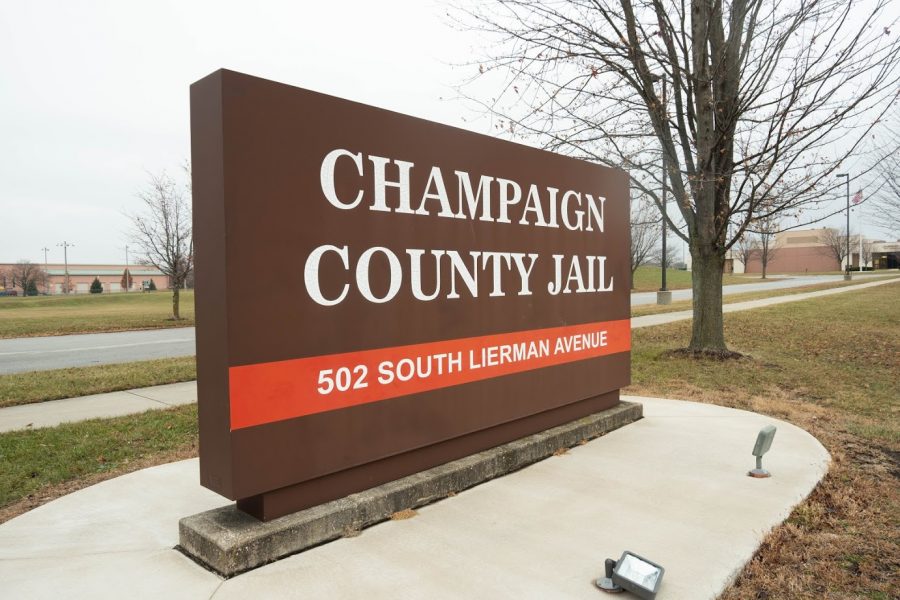 The sign for Champaign County Jail stands on South Lierman Avenue in Urbana on Nov. 24. The downtown facility building is facing more severe deterioration, but both jails in Champaign County are said to be lacking in rehabilitative programs and recreational spaces.

County officials are bringing more attention to the failing and out-of-date conditions of Champaign County’s jails. The downtown jail’s old construction has led to severe deterioration: electronic locks to doors opening seemingly randomly, leaks from the roof, cockroach infestations and a lack of recreational space.

Leah Taylor, member of the Facilities Committee on the county board, said she visited the downtown facility two months ago.

“It’s honestly something out of a horror movie,” Taylor said.

There are two jails in Champaign County: the downtown facility, which opened in 1980, and the Satellite Jail, which is located in Urbana and opened in the mid 1990s, according to county Sheriff Dustin Heuerman.

The downtown facility building is facing more damage, but both are said to lack in rehabilitative programs and recreational spaces that allow inmates to exercise and de-stress with activities.

“Besides a growing county and different corrections philosophy now than in the past, the county hasn’t put a focus on maintaining infrastructure over the years,” Heuerman said in an email.

According to Mike Ingram, also a member of the Facilities Committee, the downtown jail does not comply the Americans with Disabilities Act, a government-set standard for public facilities. Government warnings have been issued to the county, he said.

In September, the county received an estimate from architectural firm Reifsteck Reid for a plan to renovate the facilities and address the lack of recreational space. The approximated cost the firm gave was $47 million.

Heuerman said this estimate would include building a new sheriff’s office, creating special management housing at the Satellite Jail facility to better address medical and mental health needs and renovating parts of the existing Satellite facility to offer more programs for inmates. Heuerman said this would reduce the likelihood of inmates returning to jail.

The multimillion-dollar plan was presented on an “a la carte” basis, meaning the county can prioritize separate parts of the plan and pursue fixing problems that need it most.

“More investigation of that plan made me realize that that’s not exactly the case,” Ingram said.  “It can’t really be as compartmentalized as they would say.”

According to Taylor, the plan in this estimate was to get rid of the downtown jail and expand the satellite facility. However, she said only 12 beds would be lost in the process, which she described as “ridiculous,” because it would be more beneficial to have a larger decrease in beds.

“We are not trying to expand; we should be trying to shrink,” Taylor said.

At a recent board meeting, state representative Carol Ammons discussed the topic of Illinois’s upcoming legislature in relationship to inmates. According to Ingram, Ammons said the number of people incarcerated will substantially decrease in the near future.

“If you look at other states — New Mexico is one of them — that have done some of the similar things that Illinois is doing right now … work on pretrial services, eliminate cash bail for anything nonviolent, you take steps to make sure that things like driving on suspended (licenses) won’t get you arrested and stuck in jail,” Ingram said.

Heuerman said over the last several years, county law enforcement has been more cognizant of who they are arresting, issuing a ticket or Notice to Appear in lieu of a physical arrest when possible.

“We paid something like $25,000 for this study,” Taylor said. “I would hate to just throw that money away. I do think it could be a springboard for what we end up doing. There were some really good ideas in there as far as meeting spaces and office spaces.”

A decrease in the number of inmates leads to the possibility of perhaps one facility instead of two, with more focus on creating a better suited environment and programming for those with mental illnesses and other medical needs. Additionally, this would lead to better building conditions, which is what the architectural firm’s plan meant to do.

At the same time, community safety is a priority of the county law enforcement, Heuerman said.

“I’m working in collaboration with community stakeholders, the State’s Attorney’s office and judges to help ensure we are doing the best job we can to uphold the presumption of innocence of those accused of a crime while also helping to ensure our community is safe from violent criminals,” Heuerman said.

The board will continue to work towards a better alternative toward the current jail conditions.

“It’s one of the most important things that will happen in our community in this decade,” Ingram said.

Editor’s Note: A previous version of this article stated that the jail does not comply with the Economic Development Administration. The Daily Illini regrets this error.