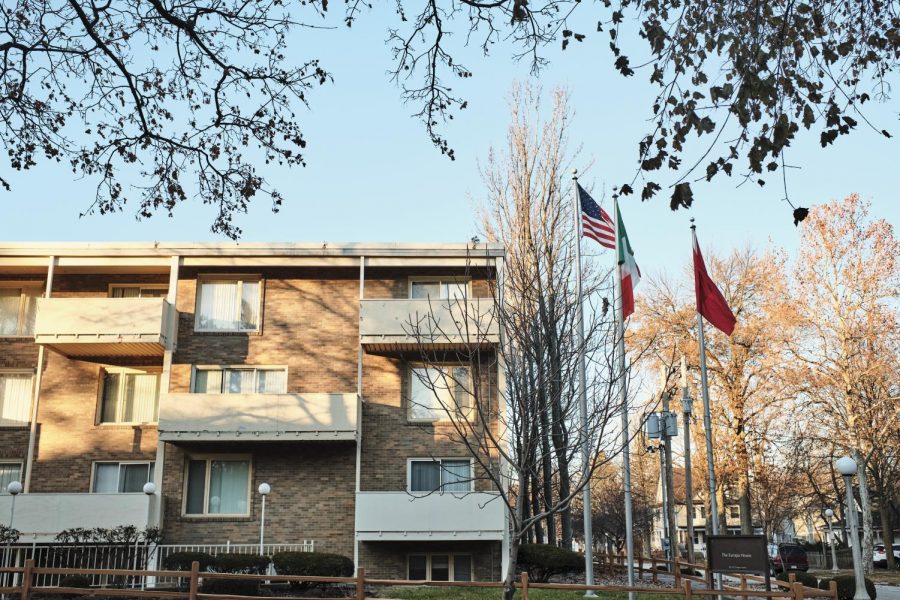 Europa House sits on the corner of Busey Avenue and Oregon Street on Tuesday. The building has lost its private certified status following the decision to require meal plans for students living in University housing.

A University Housing announcement in 2016 informed all housing facilities all their residents must purchase some sort of meal plan to live in the facilities. In lieu of the announcements, Europa House laid out their options.

Units in the Europa House, located on 802 W. Oregon St., have their own kitchens for residents to utilize, but other than that, the facility does not have a cafeteria and, in the past, did not require students to have a meal plan to live there, putting the house at risk of losing their certification as a Private Certified Housing facility.

With the three-year timeline, Robin Stemmler, president of Europa House, and Karen Perrine, general manager of Europa House, considered their options, one being the possibility of building a cafeteria.

Europa House was first established in 1966 by Stemmler’s parents, who came to the University from Europe.

Because of this, his parents wanted a living space that catered more toward European aesthetic, he said. Since the establishment, the studio lofts and a house right down the street came under Stemmler’s jurisdiction.

However, now the future of Europa House is unknown. After the 2016 announcement and much consideration, the requirement of meal plans for residents just did not seem logical.

But no exceptions could’ve been made for the facility. The new requirement was announced and established to create consistency among student housing across campus, said Carly O’Connor, the Private Certified Housing coordinator with the Housing Information Office.

Although O’Connor was not around when the announcement was made, she mentioned the “whole goal as Private Certified Housing is to make it as comparable as an experience to living in University Housing as possible.”

Europa House was able to house about 82 students; however, this does not mean the apartments are filled each year. In total, Private Certified Housing housed around 2,600 students as of this year.

The new status of Europa House won’t be detrimental, though, because it was one of the smaller certified housing units, so if students were to move to other facilities, they could easily be absorbed. Depending on their reasons for choosing Europa House, the students may not necessarily move to another Private Certified facility, either.

As Stemmler said, the apartments and lofts were built with a European influence. Because of this, many international students, European or not, tended to gravitate toward Europa House.

“In terms of students who gravitate toward Europa for the reasons they liked Europa, do they necessarily go to another (Private Certified) facility when they left? I don’t know, but I think in terms of numbers, no, it didn’t really (affect us),” O’Connor said.

Europa House is currently experiencing some renovations. Stemmler said he does not know what will come of the buildings. They could be sold or kept, but options are still being explored.