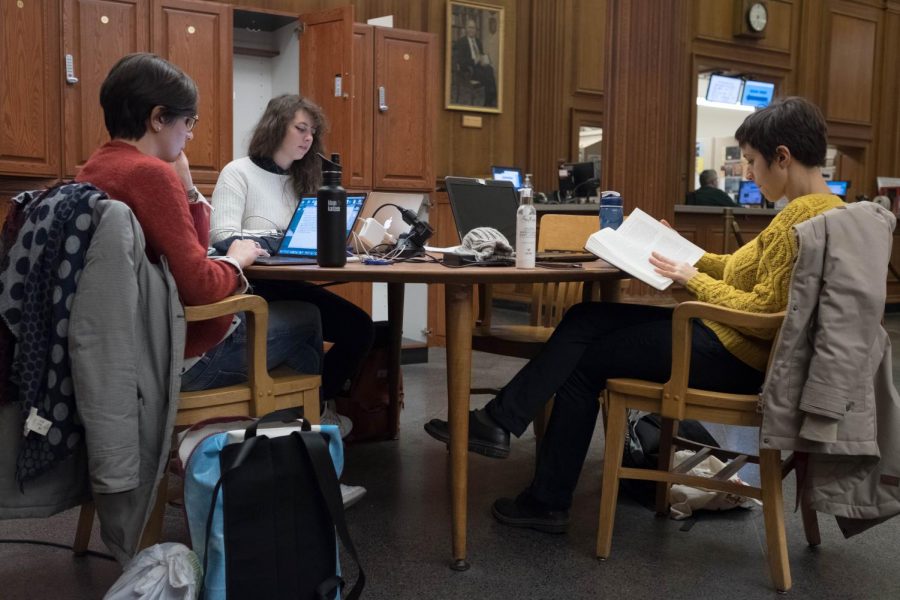 Three students study together on the second floor of the Main Library on Tuesday. Many students face heavy workloads and study during finals season.

During finals season, students may face heavy workloads of final projects and exams. In some cases, exams are close together, which increases the workload and the stress on students.

“Two semesters ago, I had six finals in four days, which was really bad,” said Adhithya Bhaskar, senior in Engineering. “When I have so much stuff to do, I just do as much as I can and try not to stress about it.”

Justin Baker, graduate student in Media, said he had “A lot of projects. Everything (is) happening at once … all my projects are in the same week, and it’s very overwhelming. I stay on that grind — there are lots of late nights.”

Not all students, however, are as vexed by their upcoming exams. Some, like Josh Wrobel, junior in Engineering, have a much calmer approach.

“Finals mean less homework,” Wrobel said. “I have as much stress about them as I do about anything else.”

Studying harder than usual is one of the myriad of ways students manage their anxiety about upcoming finals. Other ways students relieve stress include sports or seeing friends.

“I make time to watch TV or hang out with friends to relieve stress,” said Noah Sung, junior in Engineering. “I just do my best to finish the work I can.”

“I watch YouTube, play basketball and take long showers and listen to music,” Baker said. “Those are the main ways I manage my stress.”

Bhaskar and the other students said they have not tried the services provided by the Counseling Center or other University resources.

Final exams season, though an arduous time, represents the end of the semester and the heavy workload.

“I feel like you can stress before a test or stress after,” Wrobel said. I study before, so I don’t have to be stressed after.”

Baker said he was optimistic about how he would feel after his exams were finished.

“I keep moving on after it’s done,” Baker said. “What happens, happens, and there’s a light at the end of the tunnel. Good luck, it’s going to be fine and life moves on; remember that.”